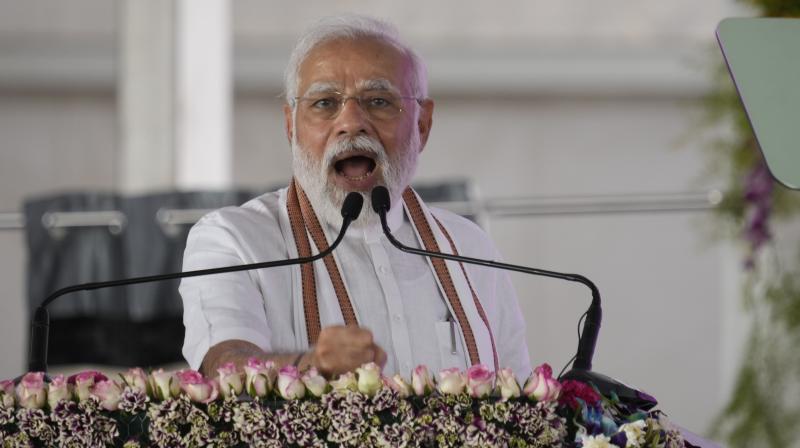 Srinagar: Prime Minister Narendra Modi, during his one-day visit to Jammu and Kashmir on Sunday, e-inaugurated and laid foundation stones of multiple development initiatives worth over Rs 20,000 crores.

One of the key projects was the Banihal-Qazigund road tunnel passing beneath the Pir Panjal range which separates Kashmir Valley from the Jammu region. Built at a cost of over Rs 3,100 crore, the 8.45-km-long tunnel will reduce the road distance between Banihal and Qazigund by 16 kilometres and the journey time by around one and a half hours.

It is a twin-tube tunnel – one for each direction of travel – with the twin tubes being interconnected by a cross passage every 500 metres, an official said adding that it will establish all-weather road connectivity between the two regions of J&K.

The Prime Minister also laid the foundation stone of three road packages of Delhi-Amritsar-Katra Expressway, being built at a cost of over Rs 7,500 crore. These packages are for the construction of 4/6 lane access controlled Delhi-Katra-Amritsar Expressway from Balsua on NH-44 to Gurha Baildaran, Hiranagar,  Gurha Baildaran, Hiranagar to Jakh, Vijaypur, and Jakh, Vijaypur to Kunjwani, Jammu with spur connectivity to the Jammu Airport.

The Prime Minister said that he felt quite happy after e-inaugurating these projects “as power sector is having huge potential to take J&K to new heights.”

He also inaugurated a 500KW solar power plant at Palli, which has made it the country’s first panchayat to become carbon neutral.

Modi also made about 100 Jan Aushadi Kendras functional and dedicated these to the nation. The officials said that these centres are located in the remote corners of the UT.

The Prime Minister handed over SVAMITVA cards to beneficiaries. He also transferred award money to Panchayats which are winners of awards given across different categories on National Panchayati Raj Day for their achievements.

The Prime Minister also visited the Indian National Trust for Art and Cultural Heritage (INTACH) photo gallery which depicts the rural heritage of the region, and Nokia Smartpur, a rural entrepreneurship-based model designed to create ideal smart villages in India.

“With a view to ensure rejuvenation of water bodies”, the Prime Minister also launched a new initiative named Amrit Sarovar. It is aimed at developing and rejuvenating 75 water bodies in each district of the country as a part of celebration of Azadi ka Amrit Mahotsav.