Modi leaves a mark in the Arab world

In short, this has been a good trip so far for the Prime Minister, without too much of the internal politics of India slipping in. 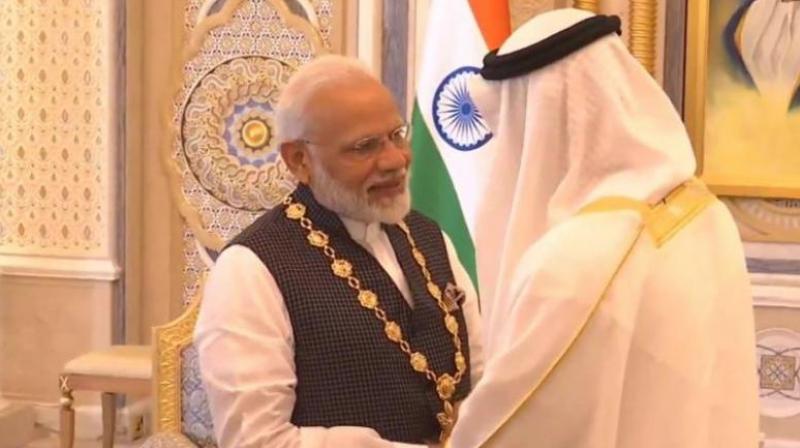 The “Order of Zayed”award was conferred on PM Modi by the Abu Dhabi Crown Prince Sheikh Mohamed bin Zayed Al Nahyan in a ceremony held at the Presidential Palace in Abu Dhabi. (Photo: ANI)

The conferring of the UAE’s highest civilian honour on Prime Minister Narendra Modi in Abu Dhabi reaffirms the excellent ties between India and the Emirates. A relationship that may have begun with oil from Abu Dhabi — the emirate is the fourth largest oil exporter — and grew with the Indian diaspora having flowered to the extent of Indians forming the UAE’s majority expat population — could never have been better. In fact, the UAE was one of the first nations to stand by India in stating the principle that the abrogation of Article 370 in Jammu and Kashmir was “an internal matter” of India. The credit for the ties hitting a new high should go to Mr Modi as he has been the active face of the initiatives taken by this country to deepen its ties in the region.

India has been able to strike  a fine balance in ties with heavyweights like Saudi Arabia, the UAE, Bahrain and even Qatar, a major natural gas supplier, besides hosting Indian diaspora, keeping intact a relationship with Iran. In the region’s geopolitics, defined by friendship with the United States, India has carved out for itself a sphere of influence. The PM visited Bahrain, which has a strategic position in the region as it hosts both US and British troops in a country with a sizeable Shia population, that could be at odds with the major Sunni influence in the cradle of Islam. A grand award ceremony in the UAE in the presence of Abu Dhabi’s Crown Prince and a Bahrain award ceremony in Manama at a time when the Kashmir Valley is an issue that may trigger adverse reactions, thanks to Pakistani propaganda, should be considered a major victory for Indian diplomacy.

The PM’s trip, which included visits to the Arab world, will face its sternest test soon when Mr Modi will meet the US President Donald Trump in Biarritz, France, on the sidelines of the G-7 summit. With Mr Trump yet to get the bee out of his bonnet about his fancying a role as a mediator in Kashmir, despite the US state department declaring it is India’s internal matter, Mr Modi has some clever skirting to do. He is at the G-7 as the guest of France to take part in deliberations on the environment, climate change and digital transformation and the Paris Accord. The PM’s earlier halt in France for a bilateral meeting with President Emmanuel Macron was symbolic of continuing uncomplicated and historical good relations between India and a nation that has had military ties through HAL and is also soon to supply Rafale fighter jets in a major defence deal. In short, this has been a good trip so far for the Prime Minister, without too much of the internal politics of India slipping in.