It's a helpful sign that Delhi BJP MP and former India cricketer Gautam Gambhir has demanded action against Mr Mishra. 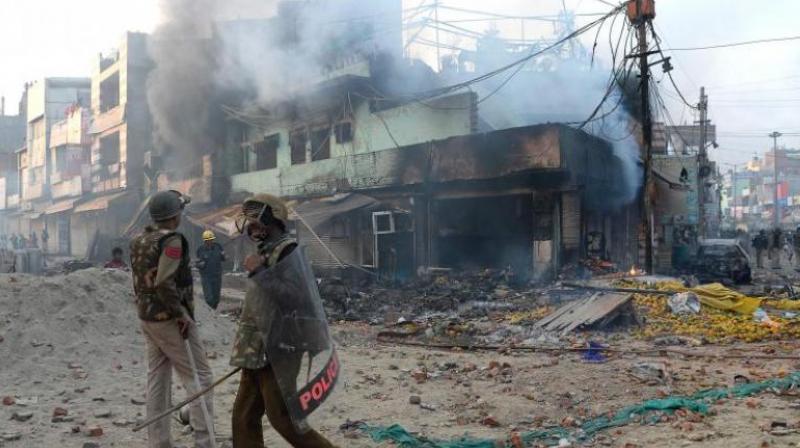 In light of the history of communal violence in the country, it is not fanciful to think that those who traditionally developed this particular instrument as their stock-in-trade may be in search of opportunities outside Delhi too.

Northeast Delhi has been in the grip of a full-scale communal riot since Sunday. It seems that the violence could have been nipped in the bud if the Centre, which controls the Delhi police, had been purposeful. On Day 3, leaping flames and billowing smoke framed the skyline as the situation worsened. The rioters have used firearms extensively.

Only an impartial commission of inquiry can establish the causes of the present trouble, examining in particular the role of the police and of political parties and their local leaders. Instead of taking effective steps, minister of state for home G. Kishan Reddy sought to hint that anti-CAA elements had hatched a plot to create trouble during US President Donald Trump's visit and would be dealt with severely. This could only have encouraged the communal elements.

The provocative comments of Delhi BJP leader Kapil Mishra, who had compared the recent Assembly election with an India-Pakistan war as the BJP targeted the Shaheen Bagh anti-CAA protest, apparently led to a so-called pro-CAA mobilisation that quickly degenerated into rioting. It's a helpful sign that Delhi BJP MP and former India cricketer Gautam Gambhir has demanded action against Mr Mishra.

In light of the history of communal violence in the country, it is not fanciful to think that those who traditionally developed this particular instrument as their stock-in-trade may be in search of opportunities outside Delhi too. State governments need to be alert to their machinations. Their immediate aim may be to put peaceful anti-CAA protesters under pressure. This may give other extremists the excuse to go on the rampage.

While on Monday afternoon the Delhi police claimed that the situation had been brought under control, although there was tension in the air, it was evident the police was divorced from reality or was being indulgent towards troublemakers initially. Live television reporting was showing a very different picture as the dead and injured were being taken to hospitals in a steady stream. By midnight Tuesday, the situation had in fact worsened with the count of the dead rising to 13. Some 70 policemen and more than 100 civilians lay injured. A head constable was killed in stone-throwing on Monday. Journalists were attacked.

Communal trouble started in the wake of a peaceful Shaheen-Bagh style protest being starteed by anti-CAA Muslim women in northeast Delhi on Saturday. Mr Mishra warned the police to clear them within three days, failing which he threatened he would adopt his own methods. Stone-throwing attacks by so-called pro-CAA protesters followed not long after, developing into a no-holds-barred communal conflagration. The police remained mute spectators at the start.

Chief minister Arvind Kejriwal intervened only late Monday, urging calm, but senior AAP leader Gopal Rai told the media earlier that efforts to contact the police had been in vain. Law and order and the police are not in the hands of the state government. Even so, the AAP leadership, which is used to dealing with municipal matters and local issues like schools and hospitals, seemed out of its depth when confronted with a descent into communal chaos. It appeared to lack the tools to deal with a political contingency.