The Lakshman Rekha poses no hazard to those who have an assured income but what about the 50 crore daily-wage earners? 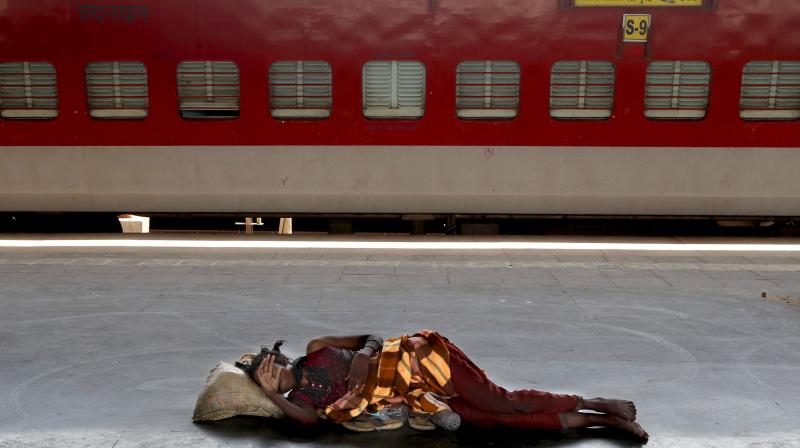 A homeless woman sleeps on a deserted platform of the Lokmanya Tilak train terminus in Mumbai. (File photo: AP)

Finally, India has got into a lockdown fighting the Covid-19 pandemic. About 130 crore people have been advised not to get out of their homes except for essentials, as part of a mammoth effort to break the chain of infection.

Prime minister Narendra Modi, announcing the decision in a televised address to the nation on Wednesday, advised people not to breach the 'Lakshman Rekha' for the next 21 days, lest we set the nation back by 21 years. The prime minister has also announced a Rs 15,000 crore package to boost the healthcare sector. Modi has assured the nation that the Union government is working with the states to ensure that the supply of essential commodities is not disrupted. The home ministry has followed up on the prime minister’s statement with detailed guidelines on how to enforce the lockdown.

While whatever the government has announced is welcome, what has been left out is worrying. The Lakshman Rekha poses no hazard to those who have an assured income but what about the 50 crore daily-wage earners India has? The prime mnister was silent on them.

Several states, including Kerala, Tamil Nadu, Uttar Pradesh and Punjab have announced schemes to ensure that marginalised people don’t go hungry. But we see no national effort to put in place a comprehensive plan, backed by the Union government with its financial muscle, for their well-being during the lockdown period. There are thousands of migrant labourers who have set out for their homes anticipating the lockdown but are stranded en route with no food, money or transport. We don’t know who will take care of them as the prime minister’s advice to people is to remain wherever they are.

The industrial sector has been asked not to cut down on salaries or wages but has been given no assurance on a help from the government. Union finance minister Nirmala Sitharaman’s announcements on easing statutory filings have come as a disappointment; her assurance to come up with plans later are less than reassuring for the economy. All that we have seen till now from the Union government are pieces of advice to the people on their conduct.

Now, the Centre must come up with its own action plan. Nations have already done it: The United States has prepared a $2 trillion economic stimulus package. Britain, another big casualty, has announced a 330 billion pound programme while France has come up with a 45 billion euro booster dose for the economy. Various estimates say Covid-19 could bring down India’s GDP by about 0.3 per cent to 0.4 per cent, which could impact people at the lowest level of the economic ladder the most. The states which are in the forefront of the fight against the pandemic have been given no assurance on Central support; many are asking the Centre to at least clear the GST arrears that are due to them. It is time that the Centre comes up with a definite plan to mitigate the fear that more people will die of hunger than of Covid-19 during the lockdown and to handhold the economy out of the tough times.