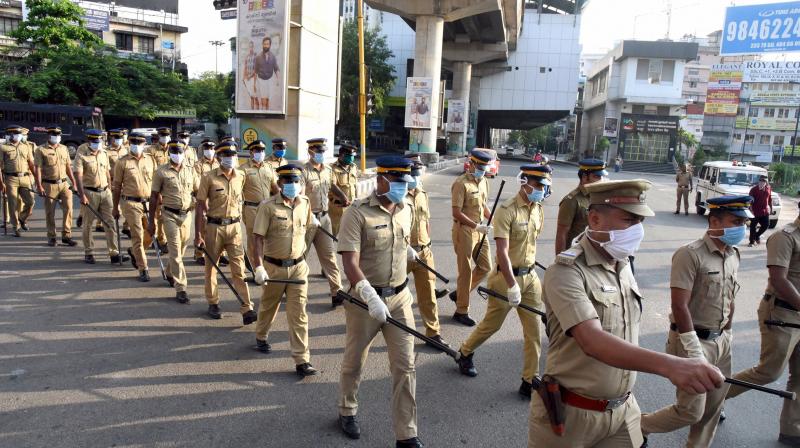 Kerala policemen conduct a march to enforce the COVID-19 lockdown in Kochi. The Kerala government has been forced by the Centre to step back on relaxations it had planned to give. (PTI)

The Union government’s attempts to micro-manage the national lockdown to contain the pandemic Covid-19 in some states warrant careful scrutiny by people who take the federal nature of our Constitution seriously.

New Delhi has forced the Kerala government, which has come in for praise nationally and internationally for its Covid containment strategy, to go back on its move to relax the curfew norms in low-risk districts. The relaxations included opening of dine-in restaurants, bookstores, salons, industrial units in towns and intra-district bus services.

The Union government insisted that the state violated its orders on curfew norms and diluted the national time-table for relaxing the lockdown. The Centre also formed six inter-ministerial central teams (IMCT) to study and report on the implementation of lockdown measures in West Bengal, Maharashtra, Madhya Pradesh and Rajasthan. The teams were tasked to make on-spot assessment of the situation, issue necessary directions to state authorities and report back to the Centre.

Kerala chief minister Pinarayi Vijayan has said the state will conform to the Union government’s directives and amended its order relaxing curfew norms, not before demanding that they reflect regional realities. He had earlier pointed out that one-size-fits-all directives imposed an unwarranted burden on the people, citing the example of the Centre easing restrictions on the movement of edible oils but publishing the list without coconut oil, a produce the state is known for.

West Bengal chief minister Mamata Banerjee, however, has objected to the Central move to send its teams to the state. She minced no words while criticising the Centre for the unilateral move and said the “undesirable act” will not help the work jointly taken up by the Union and state governments.

It has been widely admitted that states are in the forefront of the struggle against the spread of the virus, and they have been seeking Central help which included more funds. The demand, raised by most chief ministers in various fora, has, however, remained largely unattended. Leave alone special aid, the states are yet to receive their share of the GST collection, which has been pending from January. The call by industry for a relief package has also fallen on unsympathetic ears.

In brief, the Union government has been over-enthusiastic in sermonising the foot-soldiers on how to conduct their job but less than willing to do its share. It’s a paradox that the Centre is advising Kerala, which knows what it does, but had sat on the request of the state to persuade the neighbouring Karnataka to allow its sick to access medical facilities in Mangaluru on the border until the apex court intervened.