The mahagathbandhan was formed to stop the Modi juggernaut in the country’s largest state. 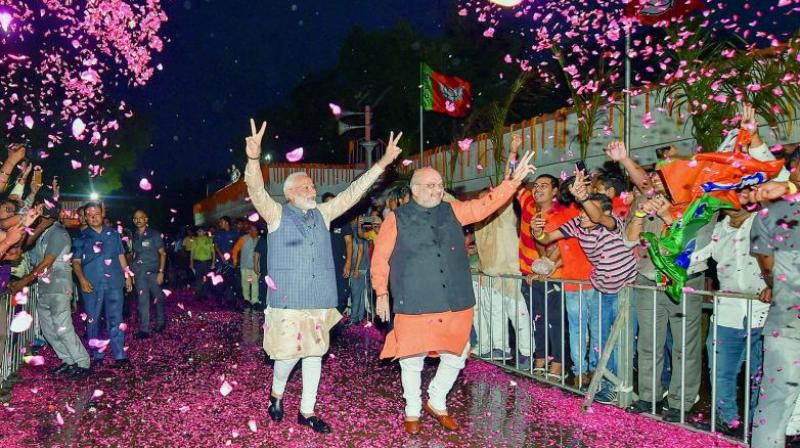 The steam-rolling win of the BJP led by Prime Minister Narendra Modi in the recent Lok Sabha election has led to the widespread belief that the caste factor and caste equations have ceased to matter since the larger narrative of “nationalism” advanced by BJP-RSS took centre-stage.

The real message behind this is that the Hindutva brand of nationalism — or “Hindu Rashtra”-oriented nationalism, to call it by its real name — is an instrument that can help Indian society eradicate the social evil of casteism. The proponents of this idea seek to ideologically exploit the fact that the so-called “mahagathbandhan” of BSP and SP in Uttar Pradesh came a cropper in the elections. The mahagathbandhan was formed to stop the Modi juggernaut in the country’s largest state.

Analysis on these lines appears motivated and simplistic. It obscures crucial, self-evident, facts. For instance, in UP, the caste equation or line-up established by the BJP to take on the mahagathbandhan was successful in the electoral contest as a result of electoral tactics, the right messaging, and the like, and handily defeated the mahagathbandhan.

The BJP's campaign, while on the ground weaning away the non-Yadav and non-Jatav dalit sections through the standard use of the caste card, gave the overarching call of “nationalism”. In the absence of Muslims from BJP’s scheme of things, this amounted to promoting a drive to Hindu power. And this goes to the root of the long-held BJP-RSS belief that the end of caste society can be brought about by rallying Hindus under the banner of religion.

The obvious questions that arises is: While this may, for a time, downplay the caste identity on the election chessboard, what will happen on the vast field of family and social relations? Will dalit-upper caste marriages be tolerated, for instance? The answer is only too obvious. Let's remember that in Gujarat the upper caste could not stomach dalit bridegrooms riding a horse in their wedding procession.

Bihar, the other important Hindi-speaking state, also points to the adept use of caste equations by the BJP and its ally JD(U). Indeed, in the last 10 years, the JD (U) leader and Bihar CM Nitish Kumar has gone about salami-slicing the OBC and dalit groups into the “ati-pichda” or “extremely backward” sections to challenge bête noir Laloo Yadav, the RJD supremo, whose clever use of the Muslim-Yadav or “MY” formula has frequently brought rich electoral dividend.

It can also hardly be overlooked that the underpinning of BJP’s electoral caste arithmetic rested on maintaining a hold over upper caste votes. With this in mind, reservation in education and jobs was announced for the so-called “general” category just weeks before the election campaign commenced.

Caste in India is a hard nut to crack. Drawing large generalisations from an election result can only have political motivations.