The global development lender claims that the size of the country’s economy would shrink by 4.5 per cent in the current financial year 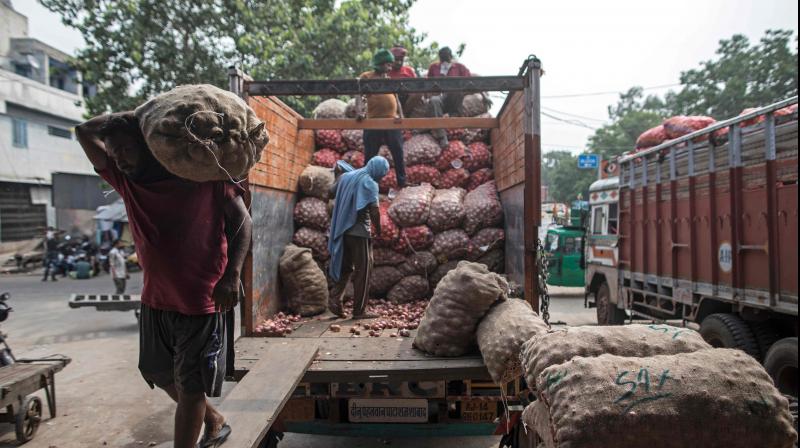 With this revision, the IMF joined the chorus of other financial institutions and economists who have been suggesting an unprecedented contraction in the country’s economic activity. AFP Photo

The International Monetary Fund (IMF) has revised its two-month-old forecast to state that India’s economy would witness one of the steepest contractions in its history.

The global development lender claims that the size of the country’s economy would shrink by 4.5 per cent in the current financial year as compared to its earlier estimate that it would post a growth of 1.9 per cent.

It blamed the revision on the government’s inability to contain the spread of coronavirus infections as expected and a slower pickup in economic activity of the country.

With this revision, the IMF joined the chorus of other financial institutions and economists who have been suggesting an unprecedented contraction in the country’s economic activity. The World Bank and the Organisation for Economic Co-operation and Development (OECD) have already predicted an over three per cent contraction in the Indian economy.

Indian rating firm Crisil predicted a contraction of five per cent. The worst assessment, however, comes from economists of state-owned lender State Bank of India, who forecast a contraction of 6.8 per cent. To put it in simple terms, the impact of the coronavirus pandemic in the financial year of 2020-21 would erode all the economic value that Indians have added in the last 16 months — a full fiscal year of 2019-20 and the four preceding months.

It would set the economy back by 28 months — the country has never seen such unprecedented in its recent history.

The Great Contraction of the Indian economy would affect all products and services which are not essential for a living. Government revenues would decline because of lower consumption and the resultant lower profits.

It would also impair the ability of state governments to spend on welfare schemes, which have mushroomed since the economy was liberalised in the 1990s. Though agriculture remains more or less unaffected by the coronavirus as on today, it cannot offset the slump in sectors like hospitality, travel, media and entertainment, real estate, wedding-related businesses, etc.

There are two fears which caused the fall in demand — the fear of coronavirus infection and the fear of future financial security.

While the fear about coronavirus will subside when people are confident about the availability and affordability of the treatment, the government could at least give confidence to people about their future financial security.
With no surety for their job or salary, people have almost stopped spending on non-essential products, affecting the country’s industrial activity. This is where the government should step in, not merely by giving sermons but by releasing its dues to the private sector and increasing its spending on big infrastructure projects.

While the government has been hesitant about the deficit financing option, there appears to be no option left other than this. Though various governments have been dipping into cash reserves of public sector units (PSUs) to bail them out, this option may not be available this year because of the poor financial condition of PSUs. Prime Minister Narendra Modi, therefore, must shed his inhibitions and act with confidence to beat the economic contraction.