BS Yediyurappa has the numbers, but bypoll test looms

This is a Cabinet peopled with rebels who want their pound of flesh, which, in turn, will upset BJP aspirants. 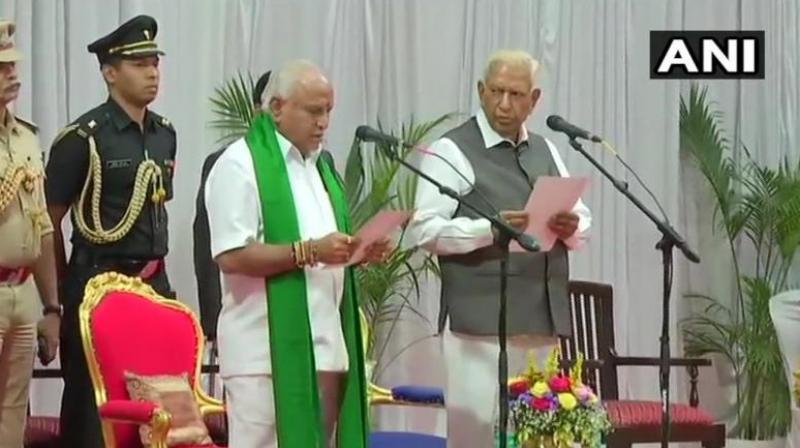 Has the BJP finally pulled off what it long wanted — recovery of its first foothold in the South that it had lost after a brief stint in 2008-2013 that it was not particularly proud of? As Karnataka’s saffron lodestar, B.S. Yediyurappa took the oath of office on Friday, he no doubt feels vindicated. He had won 104 seats in the 2018 Assembly elections and felt cheated when the Congress and the Janata Dal(S) came together and denied him the chief ministership that he sees as his last hurrah.

Certainly, the phrase “a man in a hurry” fits Bookanakere Siddalingappa Yediyurappa to a T. Adding an “I” to his name, to bring him good luck, even before he took oath as chief minister of the state for the fourth time, a record in Karnataka, the 75-year-old Lingayat strongman put on hold all decisions taken by the previous Congress-JD(S) coalition government since July 1.

Within the party, he skipped the process of meeting the legislature party to elect him as the leader, on the grounds that he had held the post of Leader of the Opposition in the Assembly till the coalition lost the trust vote.

Karnataka’s incoming chief minister got the go-ahead from party president Amit Shah through a video-call on Friday morning, albeit with a couple of riders: Mr Yediyurappa was told that it was his responsibility to make sure that he wins the floor test, scheduled for early next week. The sticky issue of roping in rebel legislators of coalition partners has been left to him, but he was told that he must consult central leaders on all decisions related to ministry formation or new policies of his administration. The absence of senior party leaders at the swearing-in ceremony on Friday evening signalled that no one in New Delhi will enter the picture till he passes the floor test.

BJP leaders in New Delhi have made an exception with the 76-year-old Mr Yediyurappa on the age limit of 75, ostensibly to avoid inviting the wrath of numerically significant voters of the Veerashaiva Lingayat community, a move which party working president Jagat Prakash Nadda, found difficult to justify during his maiden interaction with the media in the capital. Denying his party lured away 16 Congress and JD(S) legislators to bring the BJP into government didn’t wash either.

Either way, Mr Yediyurappa now has the numerical strength to pass the floor test, irrespective of whether Speaker K.R. Ramesh Kumar accepts the resignations of rebels or disqualifies them. But it will be no cakewalk.

This is a Cabinet peopled with rebels who want their pound of flesh, which, in turn, will upset BJP aspirants. And given his indifferent people skills, keeping the rebels on his side will be a far tougher call for Mr Yediyurappa than providing good governance and winning the spate of bypolls that are on the cards.

Have the seeds of instability already been sown?