AA Edit | History made on R-Day, but disorder regrettable 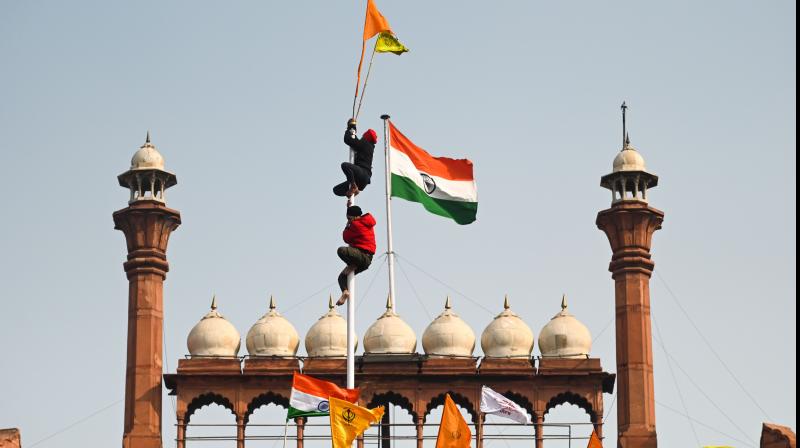 Protesters climb a flagpole at the ramparts of the Red Fort as farmers continue to demonstrate against the central government's recent agricultural reforms in New Delhi on January 26, 2021. (Sajjad HUSSAIN / AFP)

For the first time since the birth of the Republic of India on January 26, 1950, Republic Day this year wasn’t just the traditional military parade on New Delhi’s Rajpath but also the tractors’ parade by tens of thousands of farmers in the nation’s capital, venting their demands that have caught the country’s attention for many months.

History was thus made. But it didn’t turn out to be entirely peaceful as the chief coordinating body of the dozens of farmers’ unions may have desired. Providing dramatic television footage, in some parts of the city, hundreds of farmers clashed with the police, which resorted to lathicharges and teargas shelling, but on the whole conducted itself with reasonable restraint.

Had a volatile section of the farmers not veered off the route marked out for the tractor parade by the Delhi police, rushed inside the Red Fort — Delhi’s iconic landmark which has symbolised India’s grandeur in unity since the mid-nineteenth century — and raised their sectional banners from one of its flagpoles, although taking care to keep these at a lower level than the tricolour which flutters there, the chaos and disorder that marked the day might not have drawn the kind of attention it now has.

The Samyukta Kisan Morcha, the federating body of farmers’ unions whose thousands of members have been camped at Delhi’s borders for two months along with their families, braving intense cold weather, were quick to dissociate their wholly peaceful agitation from the sporadic violence, disorder and chaos of the day.

The farmers’ organisations, from chiefly Punjab, Haryana and western Uttar Pradesh in northern India, have been pressing for their demand for the repeal of three agricultural reform laws since about the middle of last year. Lately, there have been protests in sympathy by farmers in other parts of the country too. With the Narendra Modi government adopting an unbending stance in the negotiations, and right-wing social media groups seeking to malign the farmers as anti-national, the agriculturists decided to parade their determination by entering the capital city on Republic Day.

This was also an unspoken assertion that the historic day belonged as much to the people as to the State which commemorates it by staging a military show each year. However, the disorder unleashed by a section of farmers, although the main body of the parade stuck to orderly conduct, is apt to turn the spotlight on the agitation leaders. Their tactical skills will be tested. They will need to remain united — if they are serious about their demands — while ensuring the isolation of violent elements. It is to be hoped that the government will be dispassionate in investigating who the troublemakers were, especially focusing on whether fifth columnists had infiltrated to give the months-long peaceful agitation a bad name.

Republic Day in India is high on ceremony and is associated with form. It is this aspect that was breached by the events of the day. As the Covid-19 pandemic is still around, the official celebration was kept at a reduced scale. If this offered a flavour of the times — the parade of the “kisans”, practically in tandem with the “jawans”, who put up the traditional military display — offered a glimpse of the people’s history through the staging of a democratic protest even if it went somewhat awry.