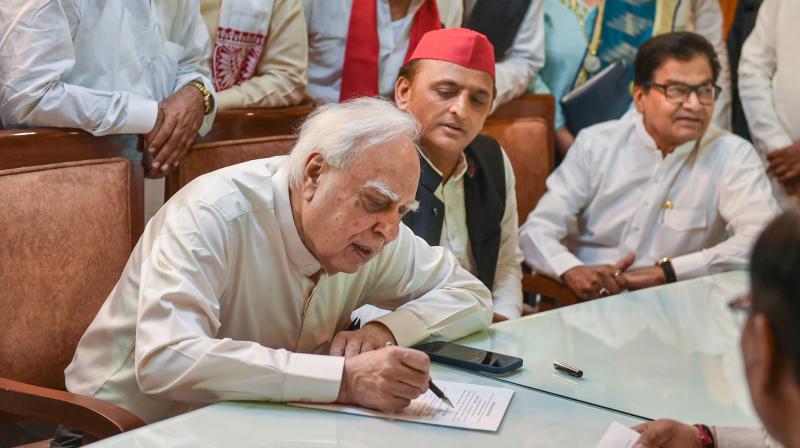 The departure of senior leaders has long stopped shocking the Congress but what could shock its observers is its response to the parting shot of Kapil Sibal, the latest to leave it. The party sought to dismiss it all, saying that it is a large organisation and people and come and go; and that Mr Sibal, in his letter to the party announcing his resignation, has said he still believed in the values of the Congress even in exit.

The party appears to have missed the import of Mr Sibal’s defection. Mr Sibal has joined not the BJP as most other deserters have but chose to ally with a formation which believes that majoritarianism in the country can be resisted only by secular forces. Reduced to the basics, the political foes of Mr Sibal and the Congress remain the BJP; those on whom they both bank are secular formations and their ideological weapons are still the same. Only the platform is different. Mr Sibal has said the present Congress does not reflect Congress values. He also believes there is an alternative to the Congress when it comes to the fight for secular values.

Although not a mass leader, Mr Sibal was in the forefront of the legal and parliamentary fight against several of the NDA government’s attempts to undermine the Constitution, as per the Congress. These include the Citizenship (Amendment) Act, the abrogation of Article 370 and the recent bid by the BJP-run Delhi municipal corporation to raze the homes of people based on allegations of being involved in communal clashes. His unequivocal stand on all these issues had earned him a lot of respect which finally accrued to his party. Now when he joins a new platform, the goodwill could get transferred with him. The Congress must worry about it.

The G-23 group of senior leaders calling for a change in the leadership and style of functioning of the Congress Party will now be a weakened force without Mr Sibal. They will have very few options if the party high command does not course-correct. It is up to the leadership of said party to decide if it will listen to voices from the ground or ignore these and get back to business as usual.