Historical context isn’t always easy to establish in such political fights over legacy a couple of centuries ago. 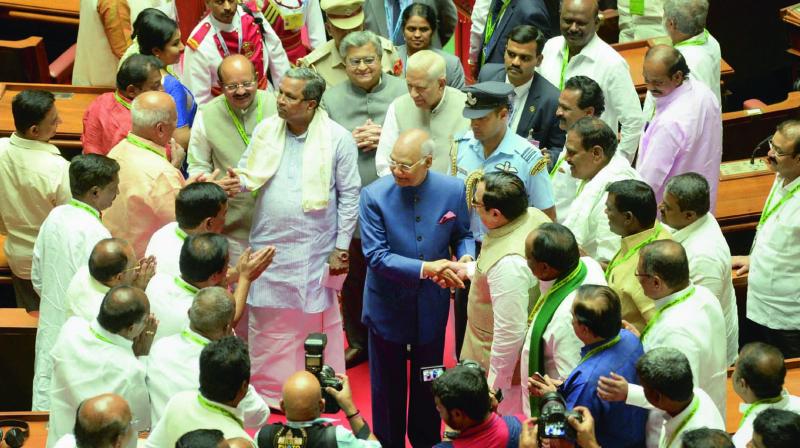 President Ram Nath Kovind meets MLAs after addressing the joint session of the Karnataka Legislature, as part of the Diamond Jubilee celebrations of the state Assembly building, in Bengaluru on Wednesday. Karnataka CM Siddaramaiah is also seen. (Photo: PTI)

President Ram Nath Kovind upheld tradition with his high praise for warrior king Tipu Sultan at the Vidhan Soudha’s diamond jubilee celebrations in Bengaluru. The “Tiger of Mysore” who died a hero’s death at the hands of colonisers has been a controversial subject of late, ever since Karnataka’s Congress government began celebrating his birth anniversary as Tipu Jayanti — as an alternative view sees him as a killer of Hindus and mass rapist. It is significant Mr Kovind spelt this out given that he’s the first President from the BJP’s ranks. Many hold, of course, that the state government has the right to act on its views, even if it appears the motivation is political.

Historical context isn’t always easy to establish in such political fights over legacy a couple of centuries ago. History is full of despots who held sway in their domain against expansionist neighbours as well as internal intrigues. It’s possible that successful rulers were also psychopaths subjugating their people. The political agenda behind the assiduous promotion of an ancient ruler, a successful warrior at a brutal time, is obvious as elections are fast approaching in Karnataka.

Beyond controversies whipped up by those embracing history as seen through their eyes and those who seek to rewrite it in a nationalist mould, the right to celebrate an icon of history is a privilege. Whether governments should do it is another matter. The BJP could, however, plan to honour legendary Hindu king Krishnadevaraya, who ruled, not far from Mysore, over the largest empire ever in South India and was a cosmopolitan liberal, a native Indian and a nationalist.