Uttar Pradesh sends 80 members to the 542-member Lok Sabha, and hence every signal that emanates from there is politically important 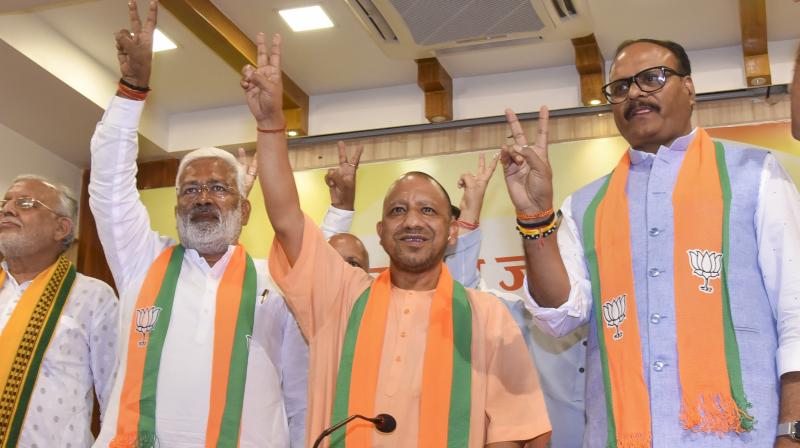 The results of the byelections held in three Lok Sabha constituencies, especially the two in the politically significant state of Uttar Pradesh, reflect the political reality of our times: An Opposition which has lost its focus and hardly has a narrative to present before the people and the ruling party which not only consolidates its own strongholds and vote banks but also uses every opportunity to encroach on the enemy territory and expand its base to reap electoral gains.

Uttar Pradesh sends 80 members to the 542-member Lok Sabha, and hence every signal that emanates from there is politically important. Its polity has been in a flux for over three decades and now appears to have evolved into a bipartisan one with the Bharatiya Janata Party (BJP) and the Samajwadi Party (SP) claiming the focus, relegating all others including the Congress and the BSP, to the shade. And both the players have created their own vote base.

The Rampur and Azamgarh Lok Sabha constituencies are considered strongholds of the SP because of the presence of the party’s traditional vote banks in full strength. The Azamgarh seat fell vacant after SP chief Akhilesh Yadav, who represented it, chose to vacate it after being elected to the state assembly, while the Rampur seat was vacated by Azam Khan, who too entered the Assembly. The big loss in both constituencies to the BJP offers reasons for the SP to open itself to the reality that its opponent has been able to identify its fault lines even in its strongholds and that its present style is not enough to stop the adversary. It may also have to reconcile to the fact that the BSP, famished though, can still play the spoilsport as it did in Azamgarh.

Ideology apart, the BJP has reshaped the paradigm of political activity in the country and has come up with a success formula which appears very simple: serious politics is a 24x7 business and cannot brook lethargy or excuses. Whether it wins or loses an election hardly matters to the party; it begins work for the next, whenever it happens.

And it coins slogans that do one too many things: project its advantages, hide its deficiencies and failures and put the Opposition always in the dock. Its latest stock campaign picture has a double engine of growth that asks the voter whether he/she wanted to hitch his/her state to the wagon powered by the Union government. It’s not a very democratic proposition but then the party has little history of following such niceties. The cumulative result is that the party’s candidates make it in the first-past-the post system.

The victory of Simranjit Singh Mann, the sympathiser of the now dead Khalistan movement, in Singur constituency in Punjab signals to the confusion in the state’s politics after two of its major players, the Siromani Akali Dal and the Congress, have pushed themselves to the margins in the border state. While the BJP is yet to discover its rhythm, the AAP, the latest entrant, has not been able to dig its heels in sufficiently deep despite winning the Assembly polls. The Punjab voter seems to be telling the AAP that it just cannot take its win in Assembly polls for granted.