The court has ordered only house arrests for now, while the matter is being heard. 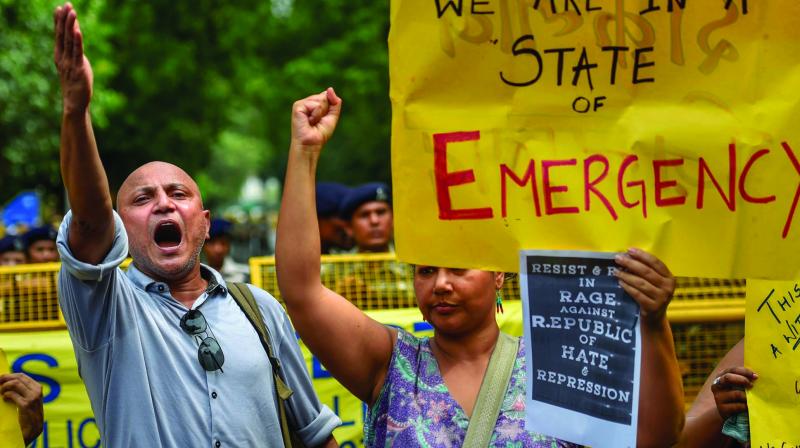 People from various organisations stage a protest in New Delhi on Wednesday against police raids at the premises of activists and their subsequent arrests. (Photo: PTI)

There are signs of a nationwide outrage building up over Tuesday’s cross-country arrests under the heavy-handed Unlawful Activities (Prevention) Act — generally used for dangerous terrorists — of five prominent intellectual dissidents, including poets, lawyers who take up the causes of the marginalised, and academics. The challenge to this came swiftly on Wednesday with five prominent academics and human rights advocates moving the Supreme Court against the “mala fide arrests” that criminalise dissent. The court has ordered only house arrests for now, while the matter is being heard.

There have been strong sectional mobilisations against the government so far — of farmers, or on the communal question typified by cow vigilante actions and lynch mob attacks. The current mood of popular resentment is different. It’s over trampling of civil liberties by the State as the police dragged out eminent persons from their homes without giving coherent reasons — pretty much gangster-style.

The arrested dissenters, each with a long record of working with the poor, have been labelled “urban Naxalites” in order to tarnish them, but it’s not clear what the charge against them is. Very loosely, it’s being suggested through friendly TV channels that a plot to assassinate the Prime Minister is being unravelled and “incriminating “ documents and close surveillance reveal these figures are likely to be associated.

The idea of their association with such a plot, if one exists, sounds preposterous, though not to the Pune police, which picked up the five individuals. Since none has been linked with violence and public disorder in their work going back decades, it’s plausibly being suggested their arrests are an example of the work of the “thought police”. It’s expected such actions will help keep government critics at bay.

A contrast is being drawn with the way the far-right Sanatan Sanstha — that was linked to the killings of rationalists like Narendra Dabholkar and Govind Pansare of Pune and journalist Gauri Lankesh of Bengaluru, and at whose premises near Mumbai bombs and firearms were found — has been treated so far, and the dramatic midnight knock-style arrests of government critics.

A plot against a high dignitary like the PM is a very serious matter and should be painstakingly investigated, and not bandied about on television in order to score political points. The Maharashtra police has failed in this regard. It has linked the eminent dissenters with the material supposedly found in June with another set of prominent dissenters said to be associated with a pro-dalit event in Pune on December 31-January 1. This was organised by Elgar Parishad, founded by retired Supreme Court judge P.B. Sawant. The entire thing seems bizarre.