The cause for many of the fires in Brazil is the administration of Jair Bolsanaro, dubbed the “Trump of the Tropics”. 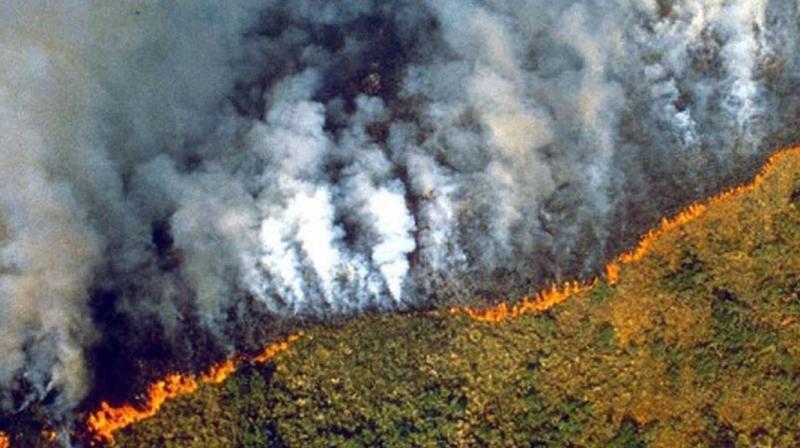 The Amazon rainforest fires have disrupted the ecological system of the area. (Photo: Instagram)

Over 70,000 fires are burning in the Amazon rainforests of South America. Such a calamity will not go on without a cataclysmic effect on the environment, and globally too as the Amazon forests represent about 20 per cent of the world’s forest resources, and occupy four per cent of the world’s land mass. The cause for many of the fires in Brazil is the administration of Jair Bolsanaro, dubbed the “Trump of the Tropics”. Many are manmade as Mr Bolsanaro’s policies have encouraged the stripping of the rainforest for agriculture and mining, the denuding a deliberate ploy to serve business interests, which may have been at liberty to set off fires. The efforts to put out the fires are being reluctantly made as Brazil’s President tried to turn his personal battle with French President Emmanuel Macron, who hosted the G-7 summit, into one of nationalism, using clever rhetoric over sovereignty when the world’s leaders were just pointing out the danger to the global environment.

Figures tell the tale about the Amazon rainforest’s importance to the global environment — home to an estimated one-third of plant and animal species and 390 billion trees in some 16,000 species, and host of a fifth of the planet’s unfrozen fresh water. The fires are causing havoc. In accepting aid and moving on with measures to quell the fires, Mr Bolsanaro may be sending more positive signals, with US President Donald Trump willingly endorsing him. This fiddling as the Amazon burns is symptomatic of those who don’t care for the environment and in whose thinking global warming is a “false” theory. They prefer to believe that climate change is a natural phenomenon without any need for human intervention to try keep global warming within limits, as science cautions.

It’s not only the Amazon that’s on fire. There are fires burning in African forests that are causing concern too, and some countries are helping with funds and expertise in fighting fires. The American summer fire season isn't upon us yet, as a wetter spring seems to have inhibited it somewhat. The point is that these fires are, in their totality, burning a hole in the earth’s resources, which are carbon sinks and help contain greenhouse gas emissions. Man’s ability to fight large wildfires is not yet up to scratch in terms of the technological leaps in several other areas. What hurts more is the thinking behind many who believe man has a right to all the resources of the planet and pandering to people is more important within a nation than looking after such a collegial cause as tackling climate change, which is something that affects the entire world. Any number of natural causes are detrimental enough already to the environment. The point is that man cannot afford to be light-hearted anymore in anything to do with natural resources, even if over seven billion people are clamouring for their share.