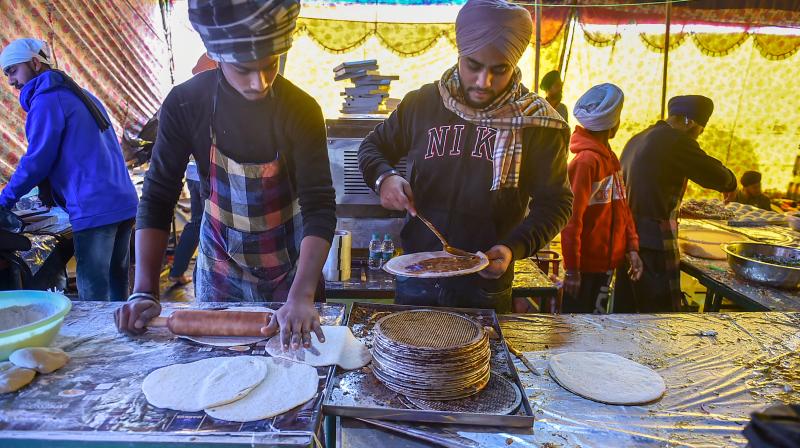 Langar being prepared for farmers during their ongoing protest against the new farm laws, at Singhu border in New Delhi on January 10, 2021. (PTI/Arun Sharma)

The Union government has said it publicly that it is willing to put the three farm laws on hold for up to one-and-a-half years and discuss the statutes clause by clause with farmers’ unions which have been demanding their total repeal. This shows that the government itself feels the farmers’ need to be heard and be convinced about the merit of the laws that would impact their lives as well as those of millions of others. The Supreme Court of India has repeatedly asserted that the people have a right to protest peacefully.

It is in this background that one should analyse the government actions that followed the January 26 tractor rally by the unions and the violence in Delhi. Various agencies have now served a summons on several farmer union leaders for the violence and failure to strictly adhere to routes agreed upon with the police for the rally in Delhi. Congress member of Lok Sabha Shashi Tharoor and six journalists have been booked under the Sedition Act for a factually wrong tweet. And the sites of agitation on the Delhi border in the last few hours witnessed furious activity. The state governments have taken an inimical attitude towards the protesting farmers sitting there. The district administration asked them to vacate their site at Ghazipur by midnight on Thursday lest they would be evicted. The officials indeed tried to do a clean-up operation but could not succeed because of the resistance put up by the farmers whose ranks swelled by the addition of hundreds more of their brethren. At Singhu, the protesters say the government cut off water and power supply to them. All these governmental actions were truthfully followed up by “local residents” who now oppose the farmers because of the purported violence in Delhi despite the fact that the Samyukta Kisan Morcha spearheading the agitation has totally distanced itself from it. Seeing that their fiat was not heeded, the “local residents” instead attacked the tents the protestors erected. The irony cannot be easily lost sight of, and the design ignored.

The series of instances proves that the government has moved from a sense of accommodation to acts of coercion. It had given parliamentary procedures and etiquettes a miss and rushed these important bills through and is now resorting to executive action to smother dissent. This is unfortunate, and the government must desist from it. None will have a complaint in the government proceeding legally against rioters; in fact, the farmers’ organisations, too, demanded proper investigation and action. However, it will be unbecoming on the part of the government to use the actions by a minuscule section of farmers with questionable credentials as a ruse to crush the agitation. One can only hope that the judiciary, which has consistently backed the people’s right to protest, will be able to see through the design and uphold it again. Otherwise, they will be a people with a genuine grievance who have no door to knock on. Such a development would be disastrous for the republic.