The external affairs minister holds an annual press conference, but these are, in reality, events without updates. 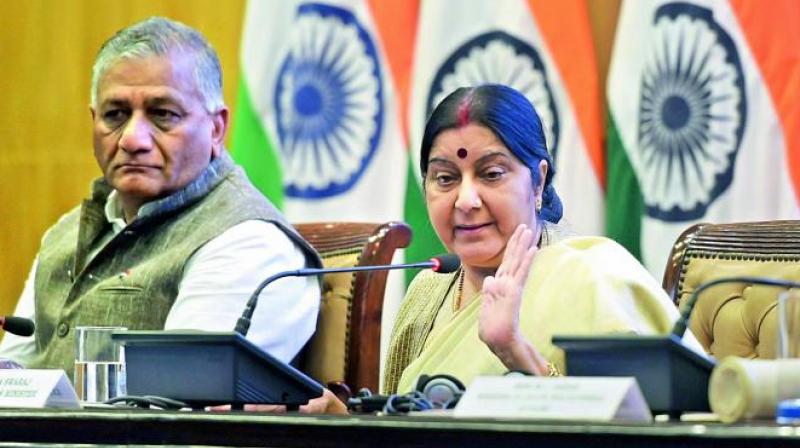 The substance and the tone at external affairs minister Sushma Swaraj’s Monday press conference appeared defensive. It betrayed the anxiety that the minister must not step beyond parroting the banal, for it’s a higher authority that visualises and runs this country’s foreign affairs, not the minister appointed for the job.

Thus, Ms Swaraj, who is otherwise perfectly capable and gifted with oratorical skills that easily surpass those of many powerful individuals in the BJP setup, spent her time in tiresome reiteration of what her party’s spokesmen have been retailing on cringing television channels for a year or more — that “terror and talks cannot go together” (in respect of Pakistan); and that in Doklam, the status quo is maintained and that the Chinese are in no way undermining our position”.

If there was anything else relating to any subject of value, then Ms Swaraj’s ministry needs to inform Parliament in the coming Monsoon Session — or issue a press release for the soft-headed.

The external affairs minister holds an annual press conference, but these are, in reality, events without updates. Ms Swaraj’s successful Twitter interventions in favour of beleaguered Indians stuck overseas (and the occasional Pakistani national in need of medical attention in this country) are by now known to be hardy perennials of this yearly meeting with the press corps, and this year was no exception.

The minister is kind-hearted. That much is clear. But does humanitarian outreach to a few souls in need constitute foreign policy, no matter how people-centric our policies may need to be? And how has Indian foreign policy gone in the past four years, now that the next Lok Sabha election is looming?

Leave aside China and Pakistan, how has the Narendra Modi government, touted by the faithful as India’s “first Hindu government”, fared in relation to “Hindu” Nepal?  What’s the score with tiny Maldives, which until recently was India’s staunchest ally? Ms Swaraj didn’t broach these at all.

For some years India has paid attention to economic and commercial diplomacy. Where have we got on that front and what are the gains, considering relations with the Asean bloc have been sought to be upgraded (by virtually trying to steal the authorship of the “Look East” policy from late PM P.V. Narasimha Rao)? To the west, the Modi government has sought to continue our traditional policy to be friends with regional rivals Iran and Saudi Arabia. The external affairs minister owes it to the country to explain what gains have accrued — on the economy side as well as political.

This government has put all its eggs in the American basket. When old strategic ally Russia began to sound gruff, Mr Modi rushed to meet President Vladimir Putin in Sochi recently and signed a deal to buy S-400 missiles. This has got Washington uptight. If Ms Swaraj is familiar with the contours of India’s dynamics in relation to the great powers, she didn’t have much to say. Perhaps her remit includes mulling things over.