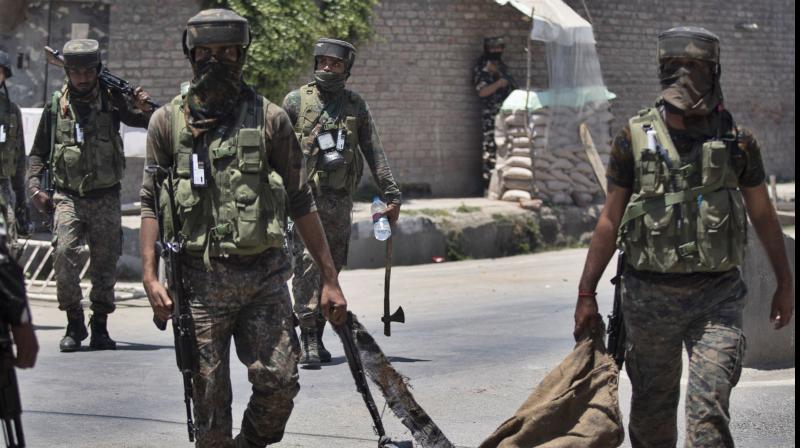 Indian soldier carry a roll of barbed wire as they return from the site of a gun-battle in Srinagar. AP Photo

The BJP and its earlier avatar, the Bhartiya Jana Sangh, in line with RSS' thinking, had long dreamt of ending the special constitutional relationship which had accrued upon the integration of the erstwhile Jammu and Kashmir state with India.

Kashmir's integration - in unique circumstances - had been negotiated between New Delhi and the government of the erstwhile Maharaja of Kashmir, Hari Singh, in the months following Independence.

The Modi government seized J&K's autonomy practically by force in August 2019 in that no consultation was held with the elected Assembly of Jammu and Kashmir while effecting the historical transformation.

The first concrete results flowing from the changed status of Jammu and Kashmir have lately been reported.

Reportedly, the newly-created Union Territory of Jammu and Kashmir has suddenly gained as many as 25,000 new "permanent residents", one of whom - an IAS officer hailing from Bihar who has served in the Jammu and Kashmir cadre for the required number of years - was mentioned in the news.

Under the princely dispensation those who belonged to the Jammu and Kashmir state were deemed "state subjects" and only state subjects could own property in the state, study in government educational institutions, and were entitled to obtain government employment.

The abolition of "state subjects" and the creation of the new category of "permanent residents" has followed as a matter of course in the wake of ending of Jammu and Kashmir's autonomy.

Now people from any part of India can apply to be "permanent residents" of Jammu and Kashmir if they fulfil certain criteria. One of these is that school children who have been in Jammu and Kashmir for seven years and have sat the Class X or XII exams from there can apply.

Evidently, other special category states (example: Himachal Pradesh, Uttarakhand) do not have such a provision. At any rate, thousands of new residents at one go does seem like a flood, and could have political repercussions. And the taking away of Jammu and Kashmir's autonomy amounted to reneging on treaty obligations.