Every day marks a new high in the number of virus cases, and India is in the race to become the third largest infected nation 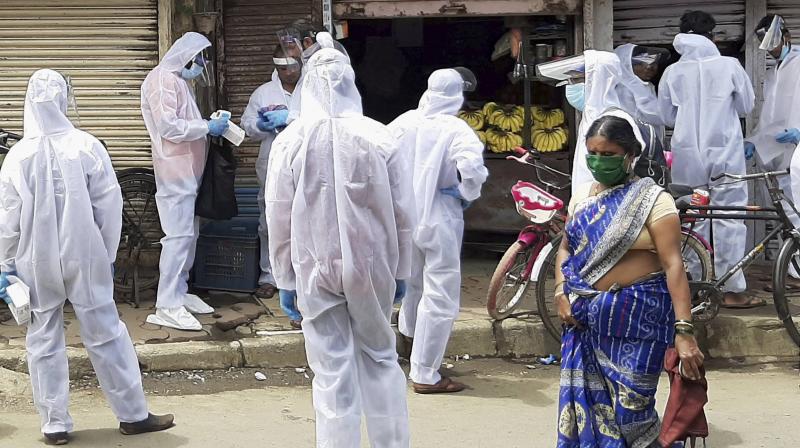 There are grim warnings about the future of the economy. Rating agencies have already raised the red flag. PTI Photo

The surging number of coranavirus infections across India and the debilitating impact it has on the lives of crores of people and the economy appears to leave a question on the nation’s leadership.

Every day marks a new high in the number of Covid-19 cases, and India is in the race to become the third largest infected nation after the United States and Brazil.

Eight states which host the administrative, economic and commercial engines of this nation are under the grip of the pandemic, proving it to be a larger threat than what we face on the eastern border.

The government, which declared a national lockdown on March 25 and extended it thrice, launched Unlock 1.0 on June 1 and is contemplating its next edition.

While Unlock 1.0 sought to deregulate the activities on the ground, several states, including Delhi, Tamil Nadu, Telangana, Maharashtra, West Bengal and Assam, have been forced to introduce their own versions of lockdown. They may have little option to contain the virus but it undercuts the idea of unlocking.

Lockdown was aimed at safeguarding lives while Unlock 1.0 was for securing livelihoods, but the fact is that both lives and livelihoods are under threat now, indicating that the sufferings of millions of people, including the guest workers who were forced to trek thousands of kilometres back home, produced no tangible results.

There are grim warnings about the future of the economy. Rating agencies have already raised the red flag.

Despite the crises, the Union government has not been able to communicate to the people a resolute plan to save the nation. There is no roadmap to augment testing, screening and treatment for Covid-19 or on readying more healthcare facilities or personnel.

Prime Minister Narendra Modi, in several interactions, has not yet given us an indication of launching a national effort to face the challenges. He, instead, gets into the details of why children, whose schools are closed due to the pandemic, should spare computer games and reintroduce ‘snake and ladder’ game.

On the border, he is at his rhetorical best, saying those who eyed our mother land had got a bloody nose while every report from the field indicates that the Prime Minister was economical with the truth.

From setting the lockdown goal of victory over the virus in 21 days to the thanksgiving charade for the health workers at a time when they were battling the disease ill-equipped to the statement on the border which the Chinese media celebrated, the Prime Minister has attempted to cheer up the nation with little reason.

There is little initiative to consolidate India’s support base in the face of Chinese aggression, forcing one to suspect a shortage of ideas and will power on the part of the ruling dispensation.

The Bharatiya Janata Party and the National Democratic Alliance owe it to the people, who gave them a historic mandate in the 2019 elections, to raise themselves up to the challenges so that a healthy country emerges from the mess once the virus is gone.