The choice of senior personnel, and selection of party candidates for elections in some states, has caused discontent among Congress folk 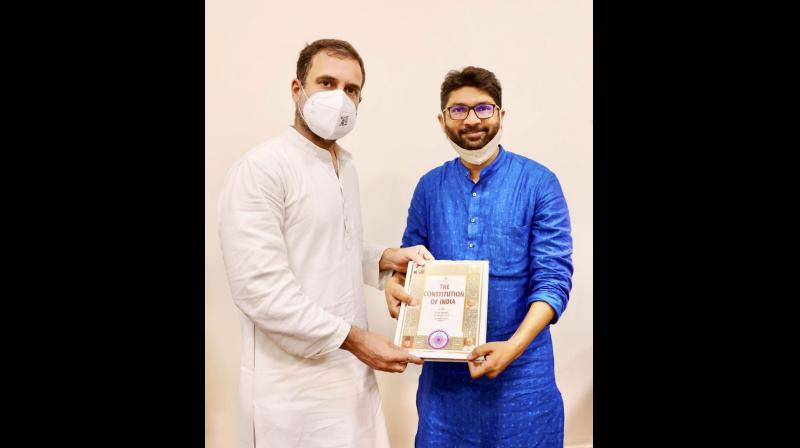 Mr Kumar and Mr Mevani have not turned to the Congress drawn by its leadership, although many Indians regard Rahul Gandhi, for all his shortcomings that are on view, as the sole committed ideological opponent of the current dispensation at the highest political levels. (PTI)

The surprise resignation of Navjot Singh Sidhu as the PCC chief of Punjab on Tuesday, and on the same day the induction into the party of the well-known firebrand young leader Kanhaiya Kumar — who had caught the nation’s fancy not so long ago — as well as the affinity shown to the Congress by Jignesh Mevani, the young Gujarat dalit leader who could not join for technical reasons, tells two different stories about the Congress Party and its leadership.

Mr Sidhu’s resignation has not been accepted, but his pompous, self-righteous letter to party chief Sonia Gandhi suggesting that “compromise” is over-rated as a virtue gives the impression of the PCC president being more than just quirky, and that he may spell more trouble being within the party’s fold than out of it. It underlines his unsuitability as the lead organisation man of a party, especially when Assembly polls are round the corner.

Quitting only two months after being made PCC president — and conspiring and causing an upheaval to get to that spot — can be no one’s idea of orderly conduct. It also speaks of utter disdain for the central party leadership, whose leading lights had regrettably become a party to Mr Sidhu’s machinations and made his cause their own, in the process undermining a respected heavyweight as CM.

The timing of the PCC president’s resignation is likely to lend credence to the view that he quit on account of his opinion not being valued enough in the choice of Cabinet ministers or top officials by CM Charanjit Singh Channi, who evidently refused to be a proxy for the PCC president, which is what was expected of him by the PCC chief.

Clearly, the Gandhi siblings, who had openly sided with Mr Sidhu, cannot bypass responsibility if the situation arising from Mr Sidhu’s sudden departure adds another layer of confusion and negativity to the one already obtaining in the state Congress in the wake of Captain Amarinder Singh’s forced resignation as CM.
The choice of senior personnel, and selection of party candidates for elections in some states, has caused discontent among Congress folk more broadly, and a few prominent ones have joined other parties. Some of these — not all — did not leave for opportunist reasons and were virtually pushed out through the amateurishness on display at top leadership levels.

While these tendencies on open display must be dispiriting to the Congress rank and file as well as leadership circles, the entry of high-profile individuals such as Mr Kumar and Mr Mevani, who have grassroots connect and broad appeal, is apt to bring cheer. The constituency of the long-suffering youth of India whose economic futures are clouded in deep uncertainty, especially on account of unemployment, and the dalit constituency in particular, is thought to look upon these two newcomers to the Congress with favour. Their arrival is, therefore, a plus.

It is clear, however, that such young leaders have turned to the Congress on account of the broad idea that the Congress has represented since the freedom movement on its good days. This idea is that it is a party for the empowerment of all Indians without discrimination — and not of particular sections.

Mr Kumar and Mr Mevani have not turned to the Congress drawn by its leadership, although many Indians regard Rahul Gandhi, for all his shortcomings that are on view, as the sole committed ideological opponent of the current dispensation at the highest political levels. It is up to the Congress to let the new entrants help connect the party to various levels of the country, and not stifle them through its byzantine court culture.