AA Edit: PM promotes himself, but opposition rises to the occasion

The outcomes of ad hoc decisions could have been anticipated 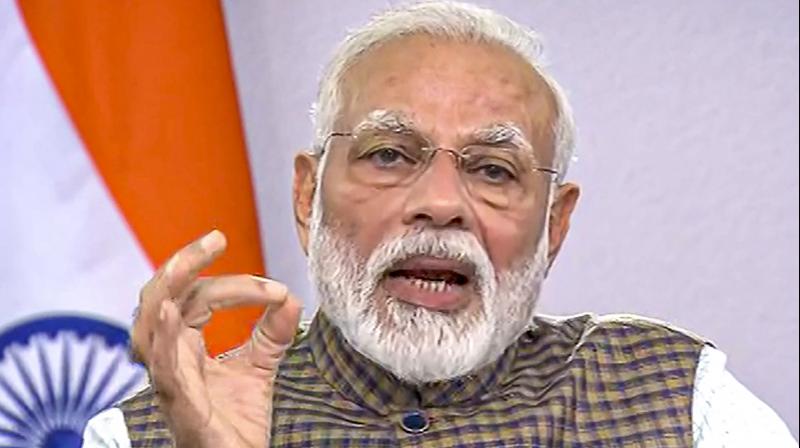 Prime minister Narendra Modi gestures as he addresses the nation on the coronavirus pandemic on March 24, 2020. (PTI Photo)

During his Sunday Mann ki Baat radio address, prime minister Narendra Modi asked for forgiveness — not for his ad hoc policymaking, not for his nudge-wink to the periodic violence that keeps his brand undiluted, not for his disdain for experts, and certainly not for his exclusionary politics — but for his “tough” lockdown decision. One, begging for mercy from everyone in general and no one in particular is disingenuous. “I strongly feel you will forgive me,” he commanded the hapless citizenry. Two, the decision was hardly tough considering societies across the planet are locking down against the deadly microbial coronavirus. Three, he should have thought of the trouble he says he put us through before abruptly announcing the lockdown — he could have primed his administration for measures to alleviate the suffering of economic migrants. But no; around a score have died in the mass return-migration. His response is almost as incoherent as was his decision to demonetise. The lockdown should have been announced on March 1 and not four hours prior; and Modi only realised the second-order consequences as an afterthought, two days later.

Instead, he announced a relief fund, PM-CARES, though there already exists a PM’s National Relief Fund (an audited account), giving rise to suspicion that it is solely meant to enhance his cult of personality. His MPs announce they are “donating” from their Local Area Development funds, though that money is not their personal savings or charity, but belongs to citizens. An American had famously said, “Never let a serious crisis go to waste,” and the BJP has taken this advice to heart by relentlessly pursuing self-promotion instead of self-quarantine.

Contrast Modi’s words to those of Congress leader Rahul Gandhi, who has been warning the government for several weeks about the impending coronavirus crisis. Unlike the incessant nastiness from the ruling clique’s cadre and trolls, the opposition has supported the decision to lock down India; and former finance minister P Chidambaram has even offered specific suggestions on mitigating the coming economic crunch — which will be crushing. Congress president Sonia Gandhi wrote to Modi two days ago suggesting a one-time state transport arrangement so that migrants did not have to trudge home (a 38-year-old died of exhaustion walking to Madhya Pradesh over the weekend), and her advice was sensibly heeded.

In his letter to Modi, Rahul Gandhi predicted that the 21-day lockdown will be extended. (The US has extended its till end-April.) Gandhi feared the return-migrants would infect their elderly back home, resulting in a “catastrophic loss of life”. He asked Modi to strengthen the social safety net; called for the China-style erection of hospitals with thousands of beds and ventilators; asked that financial institutions be insulated from the “shockwave”; and urged him to engage our “immense network of small and medium businesses and farmers” in a conversation to build their confidence and protect their interests.

The difference was clear. For Gandhi, his letter was about India and Indians, especially its poor. For the PM, his speech was all about himself.