India and Japan have both had anxious moments dealing with China in recent times. 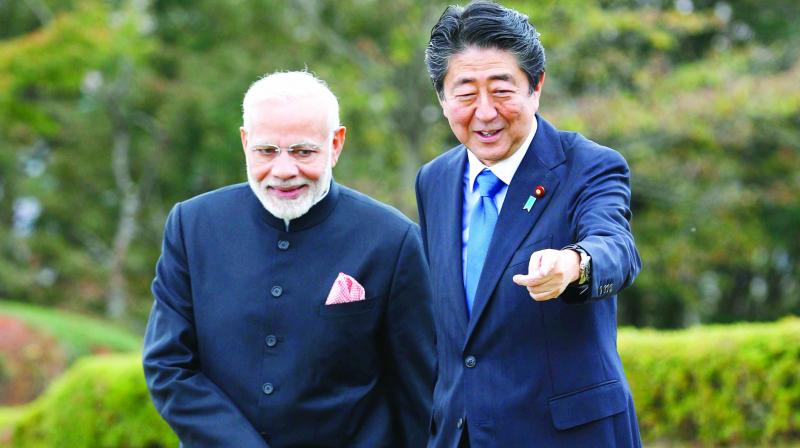 The just-ended two-day 13th India-Japan summit between Prime Minister Narendra Modi and Japan’s Prime Minister Shinzo Abe in Tokyo is suggestive of a smoothly rising curve in the bilateral relationship. The summit yielded a slew of agreements in the economic and security areas, but it is the deepening of ties in personal interaction at the top leadership level that is the basis of the success of Mr Modi’s Japan visit.

Before the formal talks, the two Prime Ministers held informal one-on-one conversations for practically an entire day. This raises the tally of informal dialogues of Mr Modi with major world leaders to three, the first two being China and Russia earlier this year.

This is a positive development which raises the prospect of cooperation and reduces scope for misunderstanding. China’s strong rise has raised anxieties all around. India and Japan have both had anxious moments dealing with China in recent times. In light of this, India-Japan relations appear to have moved closer over the past decade.

Russia and China, on the other hand, have come closer too, especially in view of their contentious ties with the United States. And yet, India-Russia relations, which have for decades been very strong but had of late come under some pressure, too are on the mend, as President Vladimir Putin’s recent visit to New Delhi showed. All round, then, the key Asian powers — India, China and Japan — are in close touch with one another. In fact, the Modi-Abe summit came on the heels of the Japanese leader’s trip to China. Russia is also half an Asiatic power for all practical purposes, and has an opening to the Pacific. It is good for the Indian leadership to be on easy terms with leaders of the other three countries.

Apart from the agreements in several fields, especially in infrastructure, Mr Modi’s recent visit to Japan points to specific forward gains in terms of security consultations in the form of a “2+2” dialogue mechanism involving the foreign and defence ministers of the two countries, and the establishment of closer ties between their navies, given their apprehensions about Chinese military role in the South and the East China Seas.

An important pact on the economic and financial side is the Bilateral Currency Swap Agreement worth $75 billion, which signifies a 50 per cent increase from the agreement of the same kind signed with the government of former Prime Minister Manmohan Singh. This will make it possible to pay for imports and exports in the currencies of the two countries, rather than the American dollar, under certain given conditions. This is a distinct gain, and another pointer that India-Japan ties are gaining solidity.