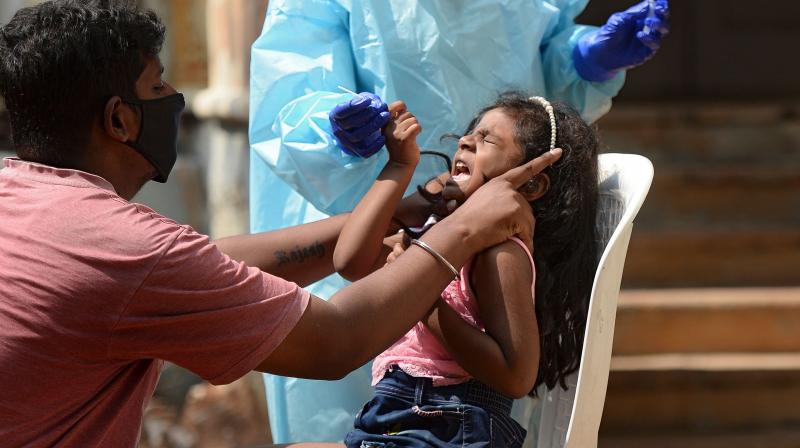 A girl reacts as a health worker wearing protective gear prepares to collect her swab sample to test for the Covid-19 coronavirus at sample collection centre in Hyderabad on October 29, 2020.(AFP)

Notwithstanding the steady stream of good news with occasional reverses on the vaccine front, there is little on the ground for the world to breathe easy in the fight against the pandemic Covid-19. At present, 4.54 crore people have been infected the world over with 11.87 lakh deaths as on October 30. The US is leading the tally with 92.1 lakh cases and 2.34 lakh deaths, while India is in the second place with 80.9 lakh infections and 1.21 lakh deaths. The increase in daily caseload, which showed a decline in the beginning of September has reversed the trend. The number was around three lakhs in the beginning of August and showed a softening effect throughout the month but slowly increased the next month. October 30 recorded the highest-ever daily increase of 5.45 lakh new patients. The same is the case with the number of daily deaths: it was around 7,000 in the end of July but it halved towards the end of September but the numbers have again crossed 7,000 by the end of October. Many are now suspecting a second wave of the pandemic. The number of new cases in the US is going up in a steady way, and the case is same in many European nations. Britain, which has been reporting close to one lakh new infections every day, has imposed its toughest lockdown in many parts, including in England. France has imposed a national lockdown while German chancellor Angela Merkel, who has ordered tougher measures, has warned of a “long, hard winter” this year. India, too, has seen its ups and downs: the daily increase in the number of infections peaked in the second half of September and then showed a downward trend. They are hardening again.

Indian authorities and experts have been warning of another round of spike in infections once the festival season ended. The cue came from Kerala, which saw a sharp increase in the numbers after Onam and the state, which contained the virus exceptionally well when others faltered, is at present second only to Maharashtra in reporting new cases. Credit must be given to the Union government that launched Jan Andolan, a mass campaign to make people aware of the need to take precautionary measures such as wearing masks, observing social distancing and hand hygiene. However, it has not gained the traction it should have. Few people bothered about them while celebrating a festival last week and while voting in the first phase of Bihar Assembly elections.

The government may re-launch the campaign in mission mode with increased thrust on the rural areas so that the people take the easy and cheap option of keeping the virus away than the tougher, costlier and often fatal option of fighting it in their bodies. Lockdowns have been proved to have a debilitating impact on the economy and the government may keep that as the last option should the need arise. As Prime Minister Narendra Modi cautioned, the virus has not gone away. The government must keep reminding the people about that hard fact.