Speaking with Sonu Shrivastava, the Muktainagar strongman spoke about a range of issues relating to the recent elections. 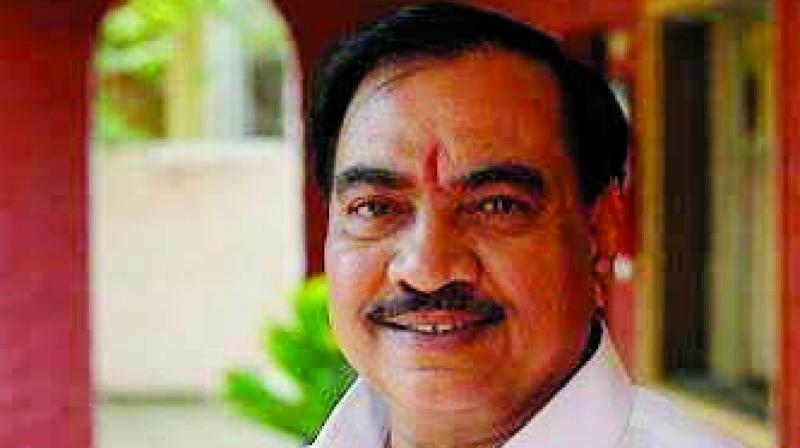 With Devendra Fadnavis failing to form the government with the help of NCP leader Ajit Pawar, BJP leader Eknath Khadse has come out all guns blazing against the move. Mr Khadse, who was himself booted out of the Cabinet over allegations of corruption, hits out at his party for taking the gambit of forming the government with the scam-tainted Ajit Pawar. Speaking with SONU SHRIVASTAVA, the Muktainagar strongman spoke about a range of issues relating to the recent elections.

Who is responsible for the embarrassment of the BJP after its government had to step down within four days?
I do not want to name individuals. But the party has leaders who had been given the responsibility to take the decisions. Perhaps their decisions might have gone wrong.

Do you think former chief minister and BJP leader Devendra Fadnavis is responsible for the current performance of the BJP in Maharashtra?
I don’t think so. At present, the responsibility can’t be fixed.

Was the denial of tickets to senior leaders like you and Vinod Tawde a reason for the underwhelming performance of the BJP?
Though we were denied tickets, we could have still contributed five to 25 seats to the BJP’s tally if the party had taken our help during campaigning. But I feel people within the party wanted to sideline me. I have been working for the party since the last four decades. I can’t go against the party. But unfortunately, those who worked hard for the party were sidelined in this election. It was clearly reflected in the results.

Was it a wrong move to go with NCP leader Ajit Pawar?
The BJP should not have joined hands with Ajit Pawar against whom it had made several allegations regarding a massive irrigation scam in the state. We had provided the evidence in a bullock cart about the scam. But it seems that after coming to power in 2014, the party sold all the evidence to the scrap dealer as the price of scrap was high those days. His stepping down as deputy chief minister was a face saving act. It would have been more humiliating for Ajit Pawar if he had waited for the floor test in the Maharashtra Assembly.

Was it possible for the BJP to form a government with the Shiv Sena?
The chapter is over. Now, everything has come out. I am not aware whether the promise of sharing the CM’s post for equal terms was made to the Sena by the BJP. But I feel finding a solution (for the stand-off between the BJP and the Sena) was not an impossible thing. Had they found some solution, it would have been better for Maharashtra.

Did the BJP fail to show flexibility?
People supported the Mahayuti. Both parties (BJP-Shiv Sena) should have shown flexibility. If they had taken two steps backwards, this situation would not have arisen.

Will the Central leadership need to intervene in Maharashtra to resurrect the BJP?
The party is alive. In 2014, the party had contested 288 seats and won 123 seats. This time, we have contested 164 seats and won 105 seats. If one sees the winning ratio, it is equal to the 2014 Assembly results. There is no need for the Central leadership to interfere. We are capable of strengthening the party.