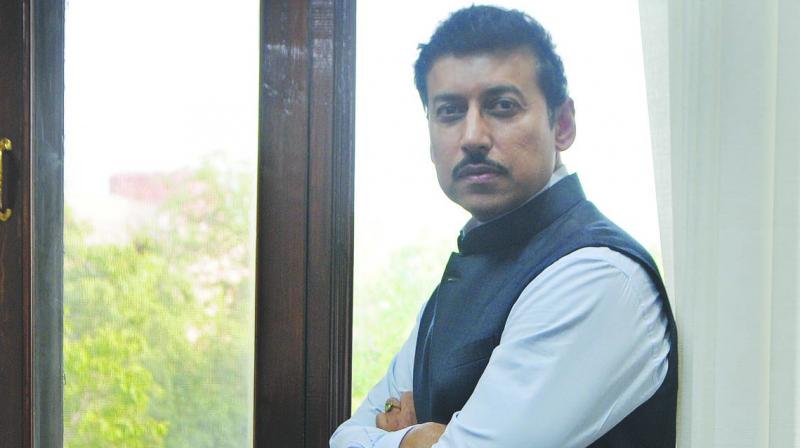 Taking time out from his busy campaigning schedule in the Jaipur (Rural) Lok Sabha constituency, the minister of state (independent charge) for information and broadcasting and youth affairs and sports affairs, Col. (Retd) Rajyavardhan Rathore spoke with NITIN MAHAJAN on a host of issues. With voting scheduled to take place on May 6, the minister shares thoughts on Prime Minister Narendra Modi, the Opposition’s tactics to block Central schemes, nationalism and why national security is one of the main issues during these general elections.

With the Congress securing the state of Rajasthan in the recent Assembly polls, how difficult will it be for the BJP to reverse the polling pattern?
Assembly polls are entirely different from general elections. The Congress had claimed that they will sweep Rajasthan. However, if we study the data, we find that in the 2018 Assembly elections, the Congress won in the state with a difference of just 1.8 lakh votes. They were able to scrape through with the majority. People of the country are confident that only Prime Minister Narendra Modi can lead the nation towards the path of development and change it for the better. This time voting will be for the country and not on the basis of caste. In 2014, people had hope that Mr Modi would come and strengthen the country. Now they have trust. They have seen him working for five years and people believe it is he who can strengthen the nation. In every village that I have been to, ask women and they will tell you — Modi bilkul theek hai.

During these Lok Sabha polls, are issues like national security and anti-terror policy dominating the campaigning process at the cost of local issues?
Every election has a theme. Yeh desh ka chunaav hai to desh ki baaten hongi (These are general elections, so national issues are bound to take centrestage). We have been telling people about our local developmental works like stadiums, roads and Army recruitment drives over the past four years. They all know we have been working for them. Now we have to tell people about national issues, on how the nation needs to be made stronger. Mr Modi’s name is a synonym for strong, decisive and transparent government which also empowers people. The message is sent across by just taking the name of Prime Minister Narendra Modi. Along with development, we have also worked to secure the nation. Why should we not speak about the historic steps taken by the PM to secure our boundaries? We are proud that we have made our country stand tall. We will uproot corruption, casteism and terrorism as well.

Congress general secretary Priyanka Gandhi had made a comment citing ignorance about the Prime Minister’s caste. Similarly, Bahujan Samaj Party chief Mayawati too had made comments on the PM’s caste? Do these caste-based statements affect the narrative in the elections?
The Congress has been ruled by one principle, which is to divide and rule. They divide society on the basis of caste and then handpick the custodians who consolidate caste votes. This is the Congress’ reality and they have been doing it for years. If there is one thing the Congress is an expert at, it is telling lies with utmost confidence. And while doing so, they use caste as their weapon to divide society. However, because of the expansion of social media and other media forums, people are becoming aware of the evils of caste-based politics. We need to stand together as one undivided nation.

But do you think caste will matter in the elections as almost every political party is wooing one caste or another?
Caste has its importance but those are under specific circumstances. Having said that, we must agree that the world is expanding and modernisation is kicking in. After the BJP came to power, we tried to reduce caste-based politics and have been successful in doing that. The use of caste in politics will continue to decline in the coming years. Now you may see that many youngsters are feeling insulted as the Congress is still treating them as its vote bank because they belong to a certain caste. The Congress, without their permission, is labelling them as their vote bank.

We have seen the BJP wooing farmers after its debacle in the Assembly polls held in three states. You have also raised the issue of farmers distress and pointed towards the non-implementation of Central schemes by the Ashok Gehlot government. Will this issue help your party in the polls?
The Modi government has worked for every section of society. We have been making citizens aware of the schemes launched by our government for their welfare. Be it Ujjawala, Ayushman Bharat or PM Kisan Samman Nidhi. They (the Congress) can’t provide for any welfare measure for the people, and when the Modi government wants to implement some welfare measure they want to create roadblocks.

The Congress came to power in Rajasthan promising that their loans will be written off. They have been unable to put that into action. Moreover, in the past few days several farmers’ land, in my constituency, has been put up for auction as they were unable to pay their loan instalments. While the Congress is unable to provide respite to small and marginal farmers, they have blocked the Central scheme, PM Kisan Samman Nidhi. Though the Centre had received 30 lakh applications from Rajasthan for the Kisan Samman Nidhi scheme, the state government chose to not process them. Even the unemployment dole of Rs 3,500 it promised is yet to reach any youngster. The Central government enabled 10 per cent reservation for the economically backward across the country. But the state government has refused to provide certificates to the eligible candidates, denying them the benefits of this scheme. Old schemes like Ayshuman Bharat and Bhamashah Yojna providing for health services have been stopped without making provision for the needy. It will spell doom for the Congress.

Is the Congress’ Nyuntam Aay Yojana (Nyay) scheme affecting the BJP’s game plan in the Lok Sabha elections?
They have made it worse for themselves. One family is saying that now justice will be delivered. If that is the case, what were you doing till now? Now people are saying that it is their turn to teach justice to the Congress. There are good people in the Congress but because the top-most positions are reserved for one family, these people can never come to the forefront. Just like the East India Company, this party too is being run like a private limited company with “nyay” only being provided to one family.

Krishna Poonia of the Congress, who is also a sportsperson, is fighting the election against you? How is the game going? Does her caste (Jat) come into play?
The problem is that the Congress has always seen elections as a match or a game. Contesting elections is serious as it is about good governance and about building a New India. But the Congress does not know this. Don’t forget that Congress is the party which committed a scam even in the field of sports. This time voters will vote beyond caste. And this is the reason why India is putting its trust in Prime Minister Narendra Modi yet again.