Huge money is being spent to destroy Opposition leaders or woo the strong leaders into their fold, says Chavan. 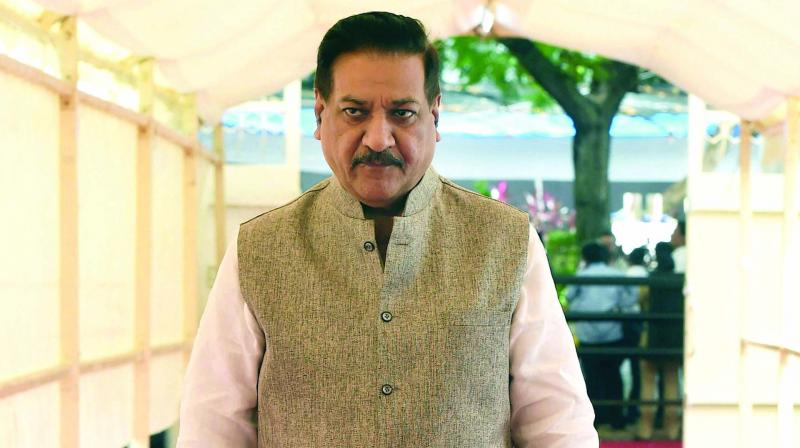 The upcoming Maharashtra Assembly election is looking like an uphill task for the Congress. However, former Maharashtra chief minister Prithviraj Chavan tells Sonu Shrivastava of The Asian Age that all is not lost for the party. He says that BJP governments have failed to fulfil the promises made in 2014 and his party will fight on the “real issues” such as unemployment, farmers’ suicides and the economic crisis.

Why are so many people leaving the Congress and the NCP?
It is a part of the BJP’s strategy to finish the Opposition parties. Chief minister Devendra Fadnavis is very fond of saying Saam, Daam, Dand, Bhed... Finish the Opposition any which way i.e. either by inducement, reward, coercion, threat of inquiries and prosecution. I have never seen such a gross misuse of power and money. But I think only some leaders and their kin have joined the BJP. But their followers and voters still believe in Congress’ ideology of inclusivity.

They will vote accordingly in the forthcoming Assembly election.

Amit Shah and Narendra Modi have been speaking of Congress-mukt Bharat for the last five years. Will Maharashtra be the first step of their “Congress-mukt Bharat” idea?
They did speak about Congress-mukt Bharat. But even RSS chief Mohan Bhagwat took objection to it. They don’t use the phrase anymore. But they do want to make it one-party rule; they want to finish the Opposition parties by gross misuse of political authorities. Huge money is being spent to destroy Opposition leaders or woo the strong leaders into their fold.

I think the people have seen this game. The electoral benefit they expect to derive from the defections will not materialise.

There is also factionalism in the state Congress unit, which is proving detrimental to the party’s electoral prospects. How do you plan to address this problem?
We had been in power for too long and the factions were created due to conflicts of interest in local body and cooperative body elections. In local elections, nobody looks at political affiliations. Strange alliances are formed in these elections that lead to tensions.

Mr Shah has asked the BJP cadre to inform people in Maharashtra about the decision to abrogate Article 370. Do you think that Article 370 will be an issue in the Maharashtra election, as the BJP wants to make it an issue?
The Prime Minister, the Union home minister as well as the chief minister are making this an issue in the ongoing campaign. They are just simply running away from issues of bread and butter of the common people. They are not willing tackle the questions of unemployment, lack of development in industry, the drought and farmers’ suicides. None of the critical issues including corruption at the highest levels of the government have been discussed. They are only discussing emotional issues. We will bring them to the real issues.

You have been expressing concerns over the state of the economy. As the figures of the first quarter have been released for the current fiscal year, there is much talk about the grim situation of the economy. What is your view on the current status of the Indian economy?
We have the lowest quarterly growth figures in the last six years. The unemployment rate is the highest in 45 years. All parameters — investment, exports, capital formation — all those figures are extremely dismal. There is the threat of a war-like situation in the Gulf; there is a trade war between America and China going on. There is also a long-term threat of new technologies, which is going to take jobs away. And all this is happening while our economy has still not recovered from the shock of demonetisation and the faulty implementation of the GST. Based on the figures released partially by the government and Budget documents, it is clear that tax revenues are falling. In order to make up for the shortfall in revenues, the Reserve Bank is being raided. An unprecedented Rs 71,000 crores worth of bank frauds were detected last year. They merged 10 banks into four banks, but the underlying problem of mismanagement of public sector banks remains. Will the government release the names of these fraudsters who have defrauded the public exchequer to the tune of `71,000 crores only last year. Since the Narendra Modi government came to power, the amount of bank frauds has increased sevenfold. The government has lost control over the economy and they are clueless as to how to fix it.

How would the current state of the economy impact Maharashtra? What will you suggest to the state government and the Central government for the revival of the economy?
Maharashtra is the engine of growth for the Indian economy. Mumbai is the key for the revival of the Indian economy. Although the government has claimed that Maharashtra receives maximum FDI, there is no evidence of that on the ground. My repeated attempts to get exact employment data generated out of new investment after the Devendra Fadnavis government came to power have not got proper replies. Therefore, we continue to search in the dark on whether investment actually happened and which new factories would be constructed in the hinterlands of Maharashtra.

What would you suggest they do for the recovery of the economy?
One of the things is that the government must bring down the GST rates on the automobile sector and the real estate sector. In fact the GST rate should not be over 18 per cent as we were strongly arguing at the time of implementation of the GST. Also, the filing of the GST needs to be simplified. Each trader having to file 37 returns every year is unacceptable.

Sharad Pawar was trying to bring Raj Thackeray’s MNS into the UPA fold in Maharashtra. Can Congress agree to it in order to defeat the BJP?
I think that there were two views about bringing Raj Thackeray’s party into the alliance. But now the final decision has been taken. I don’t think that it is right time to comment on it.