The impact of demonetisation has waned off as money is now freely available for transactions, says Shobana Kamineni. 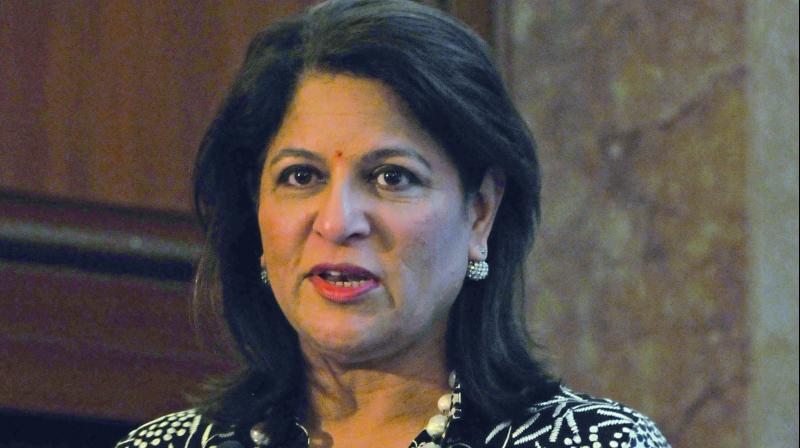 Shobana Kamineni, who recently took over as president of the Confederation of Indian Industry, spoke to Pawan Bali about the various challenges facing the Indian economy.

Ms Kamineni, also the executive vice-chairperson of Apollo Hospitals Enterprise Ltd.,  is the first woman to become CII president. Excerpts from the interview:

One of the major concerns is that private investment is not picking up. What are the reasons for it and what should be done to revive it?
Investment has not picked up as most firms have excess capacity. As the demand picks up, capacities will get fully utilised. As most sectors operate at less than 80 per cent capacity utilisation, new investments are not feasible. For investments to pick up, it is important for banks to start lending again. Bank credit growth has touched a historical low despite liquidity being available in the system.

With predictions of normal monsoon and industrial growth still down do you think it’s time for another rate cut by the Reserve Bank of India?
The Confederation of Indian Industry (CII) has urged for a lower interest rate structure, which is necessary for a rise in the credit uptake. We would request the RBI to consider the low credit offtake and subdued investment activity and also the liquidity in the system as factors in reducing interest rates. Plants are operating at low capacity and new investments will need better cost structures in terms of lower interest costs to take off. Further, inflation has remained within the RBI’s target since October last year.

Is the Indian industry concerned over growing protectionism around the world specially after Brexit and Donald Trump’s presidency? What will be their impact on India?
Yes, it is concerned. The recent developments point to a new wave of protectionism and sub-nationalism in the advanced economies, specially when it comes to export of IT services from India.

How do you see the announcement by Infosys to hire more professionals in the US and will Trump policies on outsourcing lead to job losses in the Indian IT sector or less job opportunities in the IT sector of the country?
While visa restrictions and curbs on people movements is a worry, the trade of goods is not impacted by policies of the Trump government. And as far as visa restrictions are concerned, our domestic economy, which is growing at over seven per cent, has the absorptive capacity to engage the displaced workforce or job-seekers. Indian industry is  training its workers to move to higher quality jobs, so that they become immigration-proof.

The rupee has appreciated against the dollar, do you think the government should intervene?
The exchange rate moves as per the market requirements and constant interventions by the RBI is uncalled for. Businesses need to hedge their exposures while there is a need to protect against sudden volatilities. Over a longer period, the exchange rate should be calibrated to promote exports and create jobs.

Is the Indian industry ready for the rollout of GST on July 1 and how do you see the anti-profiteering provisions in it?
Yes. It is India’s most significant tax reform in decades and brings a single market with simplified tax administration. It will make the economy more efficient and productive by lowering transaction, transport and logistics costs. Industry is ready for the rollout from July 1. There may be some hiccups in the initial period, but the CII will ensure that its rollout is as smooth as possible. The CII is undertaking  awareness sessions and workshops across the country. The government may constitute an authority to examine if input tax credits are being passed on to the consumer and if not, then penalties may be imposed. Sellers typically mention tax rates separately from the price. In the case of MRP, tax is inbuilt and may be difficult to change immediately and pass it on. There is fear that a stringent penalty could be wrongly imposed. The clause may be deleted or amended for easy implementation.

What is the outlook for GDP growth this fiscal and when do you see India returning to an 8-9 per cent growth rate?
Conditions are positive for an economic recovery in the current year. The global economic environment is improving and gaining momentum with long-awaited cyclical recovery in investment, manufacturing and trade. The domestic demand is recovering and a normal monsoon has been forecasted for 2017. This is expected to drive agricultural performance and rural demand.  If these positive trends continue, investments are expected to start taking place by the end of the year. The GDP growth is likely to strengthen from last year’s 7.1 per cent to a range of 7.5 per cent-8 per cent. While I do believe that it will be closer to eight per cent, there are a few challenges that need to be sorted out. As you know, we have been facing subdued domestic investments, a flagging industrial production and a weak credit growth. A faster resolution of these issues will help lift growth.  In fact, I believe that as important reforms are being implemented to drive greater formalisation of the economy, the economy’s growth rate has the potential to increase by one per cent annually in the next three years.

Has there been ease in doing business in the country and less harassment from the tax authorities?
The government has taken many steps for simplifying procedures for starting, operating and closing a business at the Centre and state levels — these include implementing single-window clearance for applications, making processes digital and reforming legislations on bankruptcy. This could translate into better operating conditions at the grassroots. The industry seeks further simplification of procedures, zero physical interface for all clearances/NoCs, time-bound clearances, deemed approvals, self-certification/third-party certification, among others.  There is a need for tracking the implementation of reforms. This would entail creating a mechanism for conducting a ground-level impact assessment of the EoDB reforms at the state level. Tax administration also needs to be simplified. Simplification of direct taxes could be undertaken through simple forms. Industry feedback can identify areas that need to be addressed and may be incorporated in the state rankings.