‘What did BJP CM Raghubar Das do for Jharkhand in the last 5 years?’ 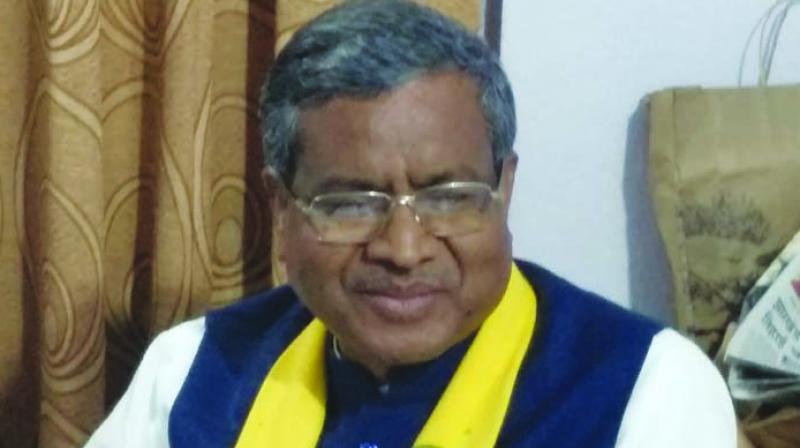 Jharkhand’s first chief minister and Jharkhand Vikas Morcha (Prajatantrik): JVM(P) chief Babulal Marandi is confident that the ongoing Assembly polls will not result in a hung Assembly and that the people of Jharkhand will “bless” his party this time. A former Union minister who quit the BJP in 2006, Mr Marandi tells YOJNA GUSAI that the reason why people will oust the Raghubar Das-led government in the state is that the ruling BJP “cheated” the state that has witnessed no development and only joblessness in the past five years under BJP rule.

JVM(P) is the only party which is contesting all 81 Assembly seats in Jharkhand. How is your party different from other parties?
We are getting massive support from people who know that our party is for gaon, garib, kisaan, naujawaan and tribals. There is no tamasha in our campaigning, no big promises, just simple things that the people of this state need. If you go through our manifesto, you will find promises that will be fulfilled. We are not promising bullet trains or smart cities or setting up big industries. We have promised schools, a better student-teacher ratio, doctors in hospitals, health officers till the panchayat level, free technical education, small industries who employ more people from this state rather than depend massively on technology. We have promised region-wise development of the state. We have promised irrigation facilities for the farmers. We want tribal areas to develop but without compromising on nature. We want to promote organic farming, which is a growing market. We want to implement measures to stop the exodus of our youth to other states to seek jobs.

Do you think the Supreme Court’s verdict in the Ram Mandir issue or the NRC or abrogation of Article 370 will have any impact on these elections, which will be raised by BJP leaders during campaigning?
Kashmir is thousands of kilometers away from Jharkhand and if abrogation of Article 370 was to have any impact (on the BJP’s poll prospects), then it would have definitely impacted on (the recently concluded Assembly polls in) Haryana and Maharashtra (Assembly polls where the BJP remained short of a simple majority). Our Constitution has clearly mentioned who are Indian citizens and who are not. The BJP was in power for the past five years as well. How many illegal immigrants has it sent back? Does it have any numbers? You see, this is the habit of the BJP: to raise such issues and I know it very well because I too was a member of it. The NRC is nothing but part of its vote-bank politics. And how can the BJP take credit for the Ram Mandir issue? If as a political party, the BJP is taking credit, then the Congress should also be given credit for it as it was during its tenure (at the Centre) that the mandir was locked and later unlocked. Everyone knows that it was after a long judicial hearing that this verdict was given by the Supreme Court and everyone accepted it. These issues have no impact here.

Are you saying that Jharkhand will vote out the BJP this time?
People are feeling cheated by this government. What did the chief minister (Raghubar Das) do for the state in the last five years except signing MoUs and visiting foreign countries in the name of seeking investment? He (chief minister Raghubar Das) visited so many foreign countries and so many big cities within the country to seek investment. Can this government give us any figure as to how much investment was done in the last five years and also how many people got jobs? Leave alone getting jobs, people lost jobs in the last five years. No new industry has set up here and instead industries have shut down. Look what is happening in Bokaro, Jamshedpur, Adityapur and Dhandbad (industrial zones). Lakhs and lakhs of people have been left jobless. Also, agriculture is one sector which provides the maximum number of livelihoods but what has this government done for this sector in the last five years? Irrigation is one of the biggest problems faced by farmers here and not even a single measure was taken in this regard. This is the state where two dozen people died because the government rejected 11.5 lakh ration cards and discontinued widow pension and disability pension. And why? Because people did not link their documents with their Aadhaar cards. You are talking about people who are living in villages, who have no clue as to how to link the Aadhaar or where to go for it. Instead of government officials helping them, the government rejected their ration cards. So many government posts are lying vacant because you could not hold state public service commission exams. Also, what will people do with Ayushman (health scheme of the Central government) cards if there are no hospitals and no doctors? If this government thinks that only campaign rallies and speeches by its big leaders will get them votes, then let’s wait for December 23 (when the result of five-phase polling will be declared).

Your party is contesting alone but there is speculation that the BJP’s top brass is in touch with you for a post-poll scenario. Also, there is an Opposition alliance of JMM-Congress-RJD, which is also contesting.
I am confident that people will vote for a JVM(P) government and as far as the speculation goes, I also keep reading about them in newspapers. This state has seen the Opposition alliance and how once it made Madhu Koda the chief minister, then Shibu Soren and then Hemant Soren. People are aware of how their only aim was to be at power at any cost and how the state saw no development during their regimes. There was so much corruption at that time. No one wants a repeat of that now.

The JMM is currently the main Opposition party but some people feel that its campaign against the BJP is not as aggressive as it should be and also that its leaders are not highlighting the issue of corruption.
You see, both the BJP and the JMM were in alliance till a few years back and had formed a government as well. So both parties know each other’s weaknesses and maybe that’s the reason why the JMM is not highlighting the issue.