‘If Priyanka sincerely starts working from now, the Congress can see better results’

My good wishes are with her and I also congratulate her for the task she has been given officially by her party, says Sinha. 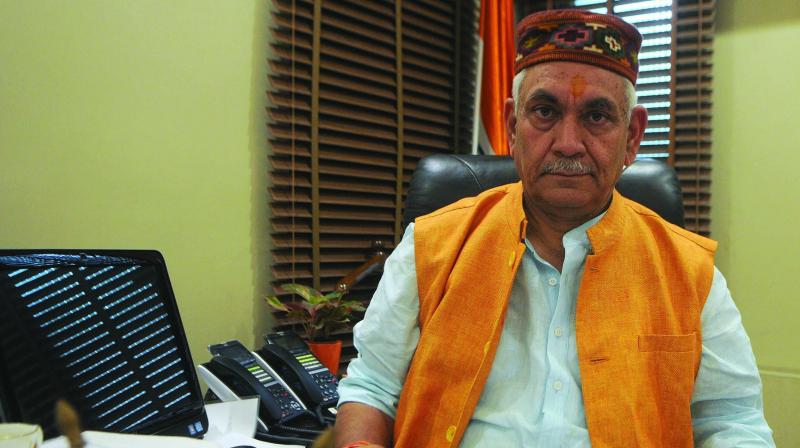 In an interview to YOJNA GUSAI, Union minister for communications MANOJ SINHA said Prime Minister Narendra Modi is the BJP-led NDA’s ‘captain and mascot’ and like in the 2014 Lok Sabha elections and in 2017 (the UP Assembly polls), his home state of Uttar Pradesh will give the maximum number of seats to the BJP-led NDA.

Lok Sabha elections are starting from next month. Do you think the BJP will continue in power?
The nation has made up its mind to re-elect Narendra Modi and the BJP-led NDA government under his leadership. I am saying this with confidence because I see the josh among the people for Mr Modi and the trust they have for his leadership. Also, our cadre is so charged because of the feedback they receive from the ground in favour of Mr Modi and the BJP-led NDA. The common man trusts him and the poor want him to continue because both have faith that Mr Modi can deliver and the NDA is the only alliance which has shown that it is dedicated to the people of the country.

You represent the Gazipur parliamentary seat in Uttar Pradesh, a state which gave the maximum number of seats to the BJP both in the last Lok Sabha and Assembly polls. What will happen now?
Yes, Uttar Pradesh gave us the maximum number of seats in 2014 and the people of the state continued their faith in 2017 when the BJP created a record with its winning tally in the Assembly polls as well. I am confident that UP will favour the BJP again in the coming Lok Sabha polls and that voters will bless Mr Modi. UP will give a significant push to the BJP-led NDA tally in the general polls and the NDA will bag more seats than it did in 2014.

But what about the SP-BSP-RLD alliance which many political pundits feel can dent the BJP’s prospects in UP?
It is true that if one goes by the optics, this alliance looks strong in terms of vote banks. But then even voters know that it is an alliance of rivals and the ground reports contradict the optics. You (Opposition parties) might try hard to forget your own history but voters remember everything. But yes, how effective this alliance is will be tested when the election results are out. We all remember how many political pundits and their predictions failed in 2014 and then again in 2017 regarding UP. Many had predicted that the BJP can never match its 1998 performance in UP but voters rejected all these predictions as they had decided to vote for Mr Modi. All the calculations and arithmetic failed in front of Mr Modi and it will fail again, as I said earlier that people have made up their mind to vote for a Narendra Modi-led NDA government again.

How do you see Congress’ performance in UP now that Priyanka Gandhi Vadra has been given charge of eastern UP?
My good wishes are with her and I also congratulate her for the task she has been given officially by her party. But the fact is that she had been working for elections earlier also. She was actively involved in the last Assembly elections in Amethi and Rae Bareli. She also campaigned a lot but then we know how the Congress performed, both across the state and in their own pocket boroughs. I think that if she sincerely starts working from now, then the Congress can see better results in 2024.

What about the “mahagathbandhan” (grand alliance) of the Opposition parties? Does it pose any threat to the BJP?
I don’t see any credible Opposition against the BJP, whether it is the mahagathbandhan or a gathbandhan. The fact is these bandhans are very loose, they have no strength. The fight within these mahagathbandhans and gathbandhans is not to challenge the NDA but to resolve who can be their prime ministerial candidate.

Your party has been facing flak over the Balakot airstrike and some political parties had claimed that this strike was not over the Pulwama terror attack but to play the nationalist card before the elections?
I want to first ask these parties who was behind the Pulwama attack? It was the Jaish-e-Mohammad (a Pakistan-based terrorist organisation) which carried out the Pulwama attack. If the government had not acted, then these very parties and their leaders would have called the government a coward — wo kehte hai sarkar main dum nahin hai. But I want to tell them that the nation does not function on what these kinds of people think or how they react. It runs keeping in mind what it is that people want and the foremost concern is always how its pride is honoured.

What about the Ram Mandir? How come everytime there are elections, the Ram Mandir becomes an issue?
It is wrong to say that it is an election issue. I am one of the many lakhs of people of this country who want the mandir to be constructed at the Ramjanambhoomi in Ayodhya.

As far as the BJP goes, we had reiterated our commitment over the issue in our manifesto in 2014, which we did in earlier manifestos as well. But we have also clarified the options to resolve the issue, either through mediation or when the Supreme Court decides. We have taken the oath of the Constitution and are working according to it. The government has asked the court to give the excess land to the Nyas (the Ramjanambhoomi Nyas), and let the court decide. I would only like to request the Supreme Court that the issue should be resolved at the earliest as it is linked with the faith of millions of people

You said that there is no credible Opposition but what about farmers unrest, unemployment, rural unrest and the recent 10 per cent reservation for general categories, which the Opposition claims that you were forced to do to compensate for wooing OBCs and dalits?
The problem with the Opposition is that they give support but not without a condition, like they did for the legislation for 10 per cent reservation for general categories. A debate has been going on for many years that economically backward should also be criteria for giving reservations, no matter which section the person belongs to. It was a historic decision, which did not curtail or hamper the existing reservation policy because the government made sure of it. If you leave aside the Opposition’s allegations over farmers’ issues and see what this government has actually done for the farming as well as allied sectors, you will get a clear picture. Like the Opposition says, the PM-KISAN scheme gives just `17 a day to farmers but for a small farmer the amount is seed money to buy urea, fertilisers and seed for his land. Look what is happening in states where the Congress won after announcing loan waivers for farmers. They (farmers) have been complaining that they got duped by the Congress. Just check the number of people who opted for a MUDRA loan or got skill training or benefited from such similar schemes. They(the Opposition) say there is unrest in rural areas but I will tell them to at least visit a village and see the transformation. Earlier, villagers used to say, “Ye bharat sarkar ka post office hai” or “Bharat sarkar ka bank hai”. Now they say with pride, “Ye hamara post office hai, hamara bank hai jo Modi sarkar ne diya hai.” Ask someone how he/she feels to finally get their homes electrified or cook in a gas stove or live in a pucca house. It is easier to criticise than to admit that things have actually been done in this government.