Article 370 was just an administrative mechanism between the Union government and the state — it was nothing more than that, says Rakesh Sinha. 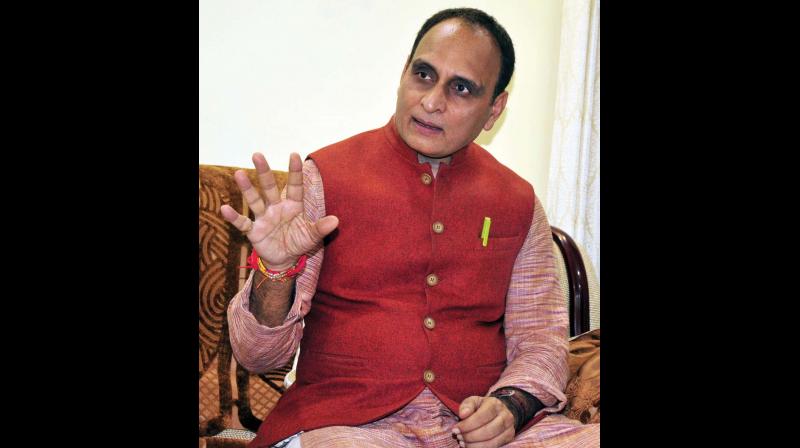 With the Modi government’s “historic” decision on nullifying Article 370, which is being hailed by many and criticised by some, BJP Rajya Sabha MP and RSS thinker Rakesh Sinha, in an interview with Yojna Gusai, said the Article was neither essential for the identity of Jammu and Kashmir nor was a pre-condition for the merger of it with the Union of India but was inserted in the Constitution due to the country’s first Prime Minister Jawaharlal Nehru’s “hegemonic policy” and “unfortunate moral support” to the National Conference’s founder Sheikh Abdullah.

The Modi government’s decision of nullifying Article 370 has been hailed as “historic” by many while some have also criticised it.
It was a well-thought decision. There was a perception that the Article was essential for the identity of Jammu and Kashmir and another also that it was a pre-condition for the merger with the Union of India. However, the fact is that Jammu and Kashmir had merged with the State much earlier than this Article’s insertion in the Constitution. Article 370 was just an administrative mechanism between the Union government and the state — it was nothing more than that. This was the reason why this mechanism was first defined as interim and then as temporary. Gopal Swamy Iyenger, who was looking after Kashmir affairs in the Nehru government, had unequivocally informed the Constituent Assembly that in the future this Article would be a thing of the past. This Article, as Prime Minister Narendra Modi himself mentioned, was used by separatists and anti-India forces as a tool. This Article had to go as it was against modernity, against federalism, prevented gender equality, promoted feudalism, prevented reservation for SCs/STs/OBCs. The repealing of this Article has been welcomed largely in the state except in certain pockets of Kashmir. The only people who protested were Rahul Gandhi (Congress leader), Sitaram Yechury (CPI-M) and Pakistan.

Some of the Opposition parties in Parliament also supported the government’s bill on the issue. What do you have to say?
For the first time in India’s history, a bill has created disintegration among the Opposition parties when they required maximum integration. At a time when anti-Modism is a tool for integration of the Opposition parties, parties like the BSP and AAP, who are opposed to Mr Modi and the BJP in every manner and are historically opposed to them, supported the government on the issue. In fact, the Congress was not against the repealing of Article 370 in Parliament but the bifurcation of the state. Also, for almost 70 years, we have been discussing and debating Article 370, so nothing more was left to debate. The only thing that was left was to repeal it.

However, some parties, mainly the state parties, have termed it as against the Muslim community and a tool to change the demography of the region.
If we go by their logic, then it means that insertion of this Article was pro-Muslim. If its insertion was not related to any religion, then how is its repealing against any religion or community? Jammu and Kashmir has a composite population — there are Hindus, Muslims, Buddhists, Sikhs, Jains and Christians in the state. In a democracy, each individual counts, irrespective of religion, caste or creed. Those who are looking at this with a communal angle are actually blaming Jawaharlal Nehru for using it as a communal tool.

There have been allegations that after Article 370, the government could also tinker with Article 371 and also that because Article 370 was one of the core agendas of the RSS and the BJP, the government took a unilateral decision and brought the bill in such a manner.
The comparison between both is unnatural and unwarranted. Article 370 was an administrative mechanism, that too for a temporary period, while the other was intended to protect the rights of tribals and was done with a consensus. History shows that the insertion of Article 370 was not agreed to by many Congress leaders in the Constituent Assembly. It was reluctantly agreed to because of Jawaharlal Nehru’s hegemonic policy. Does it mean that those Congress leaders were supporting the RSS? Yes, the RSS, Jan Sangh and then the BJP have been consistent in their approach against Article 370. It was after the great sacrifice by Syama Prasad Mukherjee that strong public opinion was created against it — which was backed by Mr Modi’s decision. Except for a handful of Leftists who lack the wisdom to connect with the people, there has been no major protest anywhere in the country.

The reaction of some countries is also being seen as support for the Modi government’s decision.
In the field of diplomacy and foreign policy, Mr Modi has been most successful. By his deeds and vision, he has emerged as a global leader. During the last six years, he has developed trust with both the developed countries and also small and developing countries and this happened despite the fact that Mr Modi does not have the privilege of a Non-Aligned Movement which the Congress leaders had. This platform’s deficit could not stop India in connecting with the world, both as an emerging economic power and also as an international player. Also, Pakistan has been isolated much earlier on the global platform because of the Modi government’s efforts against terrorism.

There are also allegations that the government took a decision against Article 370 because the BJP wants delimitation in the state, especially in Kashmir, where its political presence remains limited.
The first delimitation took place in the state under Sheikh Abdullah in the 1950s, which was done in the most communal way — to harm a particular community. Everyone knows how in the Praja Parishad, headed by Prem Nath Dogra, 65 nominations were cancelled without any reason but not a single nomination was cancelled of Sheikh Abdullah’s party, whose original name was Muslim Conference. The Parishad had the representation of leaders of all communities, which the other party did not. Sheikh Abdullah’s party had always been an agent of communalism and separatism, and unfortunately, he had the moral and political support of Jawaharlal Nehru. The pending delimitation is going to give Jammu and Kashmir proper natural constituency formulation and will secularise the communal delimitation. The administrative mechanisms and governance in the state were controlled by a handful of people in the state who belonged to four or five families. They were also responsible for the loot and plunder. The more than two-and-a-half lakh crore package given by the Centre in the last few decades was plundered by these families. Also, Jammu and Ladakh have been victims of Jawaharlal Nehru’s sympathy and emotional link with Sheikh Abdullah, which was obvious during the Constituent Assembly debates on the state. Now, both Jammu and Kashmir and Ladakh will develop like the rest of the country and the people in the regions will cherish and benefit from democracy.