‘I don’t support laws that go against Preamble’

We can’t make people stand in queue again like the way it happened during demonetisation, says Hemant Soren. 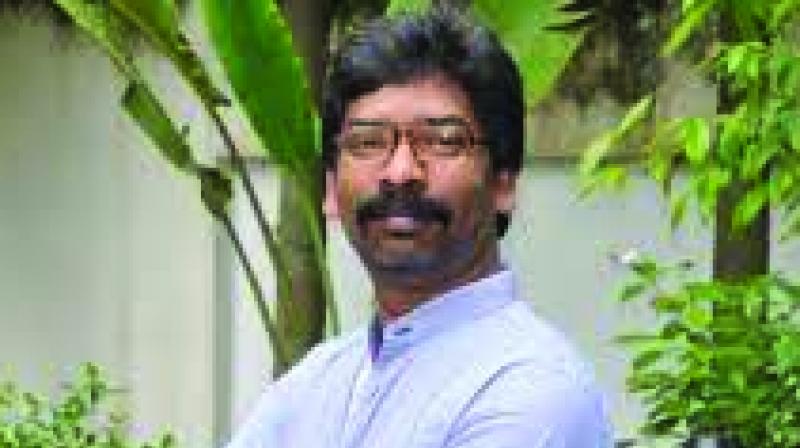 To form a pre-poll alliance against the BJP that has been riding a wave of popularity at the national level was not easy, considering that the past experience of hobnobbing with the Saffron party had not been a pleasant experience for the Jharkhand Mukti Morcha. However, the 44-year-old working president of the JMM, Hemant Soren, not only successfully stitched a coalition, but also projected himself as a viable chief ministerial candidate against the incumbent. Speaking to Pramod Kumar, the new Jharkhand chief minister explains how he turned the electoral battle in his favour and convinced the people that a ‘humble young man’ is a better choice for leading the state. Excerpts from the conversation.

How do you analyse the victory of alliance led-by JMM in the high-stakes Jharkhand Assembly polls?
Voters of Jharkhand have given a clear mandate to our alliance for which I am very  thankful. I am thankful to the people of Jharkhand for the mandate. This is the time to  take a vow to fulfil the expectations of the public. This win is also the result of the hard  work and struggle of ‘Dishom Guru’ Shibu Soren. The time has come to fulfil the goals for  which this state was created. I also want to thank Soniaji, Laluji, Rahulji, Priyankaji and all Congress leaders for all the support and for believing in me. We fought against a mighty political force like BJP, which has huge money power.

When the Lok Sabha elections of 2019 were held, there appeared no space for the Opposition parties, as people voted overwhelmingly for the BJP. How confident were you of the victory in the Assembly polls, which was to be held in about six months’ time?
I was confident that our alliance will win with a comfortable margin. We started our groundwork for the Assembly elections immediately after the Lok Sabha polls. In the Lok Sabha elections, BJP candidates’ margins were thin in the tribal are. I understood the aspiration of the tribals as well as non-tribals voters of the state and started working with them. I always remained in constant touch with the rural as well as urban voters. The previous state government, led by the BJP, tried its level best to divert attention of the masses, (but) we focused mainly on issues directly linked to the voters.

In what way would you say the BJP tried to divert the attention of the masses?
The Assembly polls are for the local issues. Issues like The Citizenship (Amendment) Act, 2019 (CAA), National Register of Citizens (NRC), National Population Register (NPR) and Ram Mandir do not work in the assembly polls. Local issues must be given priority in the Assembly polls. Besides, important issues like unemployment, hunger deaths and tribal unrest should also be given equal priority. Also, how can any party ignore young voters?

Do you mean to say the BJP is ignoring the young electorate?
I would say it in a very simple way — the youth is not the priority for the BJP. They (BJP) are not even bothered about deteriorating economy, rising inflation, poverty and issues related to adivasis. By raising issues like NRC, CAA and NPR, BJP is simply playing a divisive politics in the country.

Since the JMM is heading a coalition government in Jharkhand with the Congress, which openly opposes NRC and CAA, what are the JMM’s views on the controversial legislation?
The entire country is up in arms against CAA. On one hand, you have worsening economic situation, but you are busy with CAA.  We can’t make people stand in queue again like the way it happened during demonetisation. Many people lost their lives. What’s the need for such Acts? Who will take responsibility for the lives lost? We don’t support laws that go against the Preamble of our Constitution.

What are your priorities for Jharkhand?
Jharkhand is a mineral-rich tribal state. The tribals have favoured the alliance, which is perceived as a backlash against the BJP government’s amendments to land tenancy laws. The anger among the tribal community was quite palpable. As promised in the manifesto, we will bring “right to land law” to give land to the landless. We will soon come out with a peoplefriendly industrial policy for Jharkhand in which local youth would get maximum employment, besides encouraging cottage and minor industries. Cottage and minor industries will be promoted. For the welfare and development of the deprived, dalits, tribals, the poor and minorities in the state, people living in slums will be ensured drinking water, electricity, healthcare, education, roads and housing. We have to take the people along irrespective of religion, class, caste and gender. My predecessor, Raghubar Das, never thought about the betterment of Jharkhand people

Is this verdict against Raghubar Das or the party?
Raghubar Das was taking orders from his bosses. He had no vision how to run the state and that worked against the party. All their talk about development is farce. It’s only on papers. No central schemes had been effectively implemented in the state. Either state government funds were not utilised properly or diverted for some other purposes by the previous government.

How do you explain the first decision of your cabinet — to drop the cases against the Patthalgadi movement accused — considering that the BJP government had taken some stern measures in this regard ? Also, are you going to order a probe against some decisions taken by Raghubar Das?
I am against vendetta politics. But the decisions which are against the people of Jharkhand, can certainly be reviewed Dropping cases against those accused of taking part in the Patthalgadi movement is a step in this direction.

What about the prospect of tourism in Jharkhand?
It is a priority area for me. Let me tell you very clearly that we will change the face of Jharkhand in terms of tourism. This is the sector which was completely ignored by the previous government in the state. I will change the perception about Jharkhand that the state is rich but people are poor here. Keeping the interest of the people of Jharkhand, including the tribal, our government will soon come out with a detailed plan. Tourism, including eco-tourism, will be developed and local youths would find employment.