‘I blame Amma for the crisis... She did not create second-rung leaders’

Sasikala was Jayalalithaa’s close confidante but that does not mean she can rule Tamil Nadu, says Ila Ganesan. 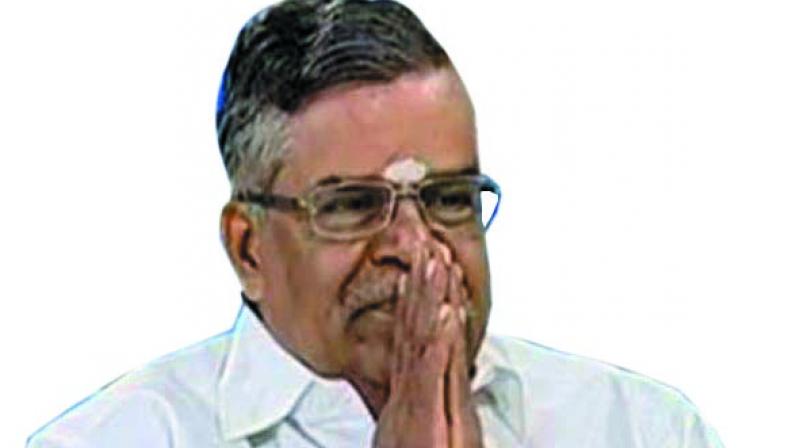 BJP Rajya Sabha member from Madhya Pradesh Ila Ganesan, who hails from Tamil Nadu, in an interview to J.V. Siva Prasanna Kumar minutes before the Tamil Nadu Assembly took up the crucial vote of confidence on Saturday. Excerpts:

As a veteran politician with decades of experience, how do you see the current political crisis in Tamil Nadu?
The mess in Tamil Nadu is worse than ever before! Of course, there was a calamity immediately after MGR’s death, and we saw one person emerge powerful because of her oratory skills. But late chief minister J. Jayalalithaa was not only a superstar but also a dedicated member of the party unlike V.N. Janaki, MGR’s widow. When Jayalalithaa became the chief minister there was solace in the fact that a dedicated party worker got the post instead of a family member. I was happy.

The process of transition of power was hampered in India ever since the Congress chose Indira Gandhi as Prime Minister though there were more capable persons than her like Morarji Desai, in the party. Her only qualification was that she was Jawaharlal Nehru’s daughter. After she was assassinated, her son Rajiv Gandhi was made Prime Minister. Given their history, the Congress has no right to talk about what’s happening in Tamil Nadu.

But then dynastic politics is not the monopoly of the Congress?
The Congress led the way. When Sonia Gandhi was chosen as president of the party no one questioned it except the BJP. Rahul Gandhi too is not qualified to be the leader of the party, for entirely different reasons though. In future, if there is a need to replace him the Congress will think of Priyanka Gandhi Vadra as their leader and nobody else.

But in Tamil Nadu, the Congress pattern of dynastic legacy has not been followed. Jayalalithaa has made a mark in Tamil political history. A leader is considered to be good when even after his or her demise, the organisation is left in good shape and it can go on to become stronger and better. I squarely blame Jayalalithaa for the current crisis because she had not created any second-rung leaders. I don’t think anybody in the party matches up to her stature.

Is your opposition to Sasikala the main reason why you are criticising the succession in AIADMK?
I support O. Panneerselvam, as a party leader as Jayalalithaa had chosen him. Also, he has proved himself to be a capable leader. The Jallikattu problem was resolved because of him and Prime Minister Narendra Modi’s intervention. Certain factions in the AIADMK could not tolerate Mr Panneerselvam’s rising popularity. The BJP has never chosen any leader because of his or her family background. No one could dream that Narendra Modi would become our PM. The BJP is proud of its legacy.

Why did the BJP refuse to support Sasikala or her appointee K. Palanisami?
The BJP did not take sides when the AIADMK selected its general secretary as it was the party’s internal matter. But chief ministership concerns the whole state. Naturally, everyone has got a right to express an opinion including the BJP. Our contention has been that if Mr Panneerselvam has proven right then why Sasikala? We were expressing not our mann ki baat but janta ka baat. Sasikala was Jayalalithaa’s close confidante but that does not mean she can rule Tamil Nadu.

It was wrong on part of the Opposition to accuse the governor acting at the behest of the Centre, which had no role to play in the political drama. He was taking time to consult legal experts. Now he has been proven right. The state would have plunged into crisis again if governor C. Vidyasagar Rao had sworn in Sasikala as CM and then, within after a few days the CM is jailed! Now everyone appreciates the governor cautious attitude.

Do you think Mr Rao was right in inviting Mr Palanisami to be the chief minister after Sasikala was jailed?
Yes. I know Mr Rao for many years. He is an upright man. He followed the rules.

Another MLA Arun Kumar from Coimbatore North, escaped from the beach resort in Koovathur on Saturday morning and returned to his constituency. How do you see this confinement of MLAs at one place under the guise of “consultation”?
There are many birds in that cage. They will also fly out.

Do you think Mr Palanisami will win the trust vote today?
I have nothing to say about Mr Palanisami as I have never met him, but he is Sasikala’s nominee. She had said she will be ruling the party and the government from her prison cell. Naturally, soon we’ll have a remote-controlled government in Tamil Nadu, which is undesirable. The Sasikala faction is following the Congress tradition.

You don’t want anyone from the Sasikala clan to rule Tamil Nadu?
People don’t want it! But etiquette demands that we welcome whoever becomes the CM based on the floor test. We will oppose him only if people reject him.

Do you favour President’s Rule in Tamil Nadu?
No. I want the rule of the elected party in the state. That is always good. Let’s see.

Is it not the responsibility of the governor to first ascertain whether the AIADMK legislators have been confined before swearing in Mr Palanisami as CM?
The MLAs should prove their loyalty only on the floor of the Assembly, where the majority can be tested. No one can question the decision then. That’s exactly what the governor plans to do.

Mr Panneerselvam said that it’s unfortunate that Sasikala once rejected by Jayalalithaa is dominating the AIADMK. What are your thoughts?
Mr Panneerselvam was considered as the most loyal person to Jayalalithaa, not only by her but also by the people. When such a person claims that he was forced to resign and was humiliated, I believe him. Even I was surprised on how he became a villain all of a sudden!

Will Mr Panneerselvam succeed?
I can only pray to God to save Tamil Nadu. God knows better than me.

Your party MP Subramanian Swamy’s support to Sasikala and Mr Palanisami has embarrassed the BJP state unit, putting them at pains to explain their stand.
He is a nominated MP. Whenever I meet him, I embrace him, but he embarrasses me.