‘Siddaramaiah behind fall of our govt, I’ll now fight both Congress & BJP’

He asserted that the present BJP government headed by Mr B.S. Yediyurappa may not complete its term. 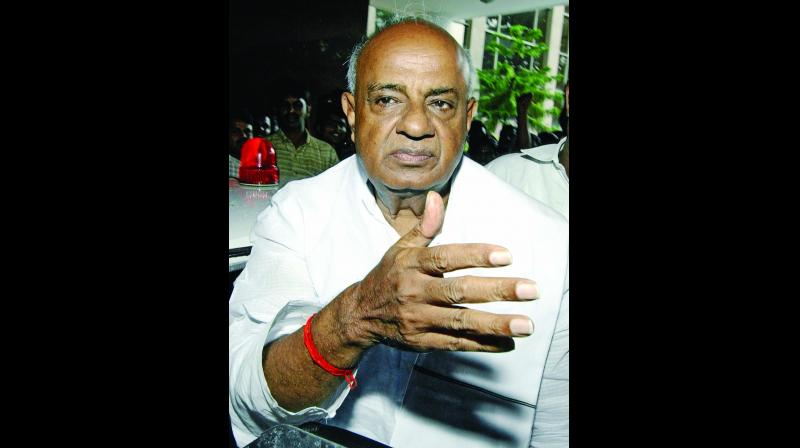 At 86, when most of his contemporaries would prefer resting at home, former Prime Minister H.D. Deve Gowda is busy at JP Bhavan, the JD(S) headquarters in Bengaluru, holding a series of meetings with party workers from all over the state. His children, a former minister and a former chief minister, are nowhere to be seen. In what sounded like an official ending to the JD(S)-Congress tieup in the state, Mr Gowda says that he would be fighting both the Congress and the BJP in Karnataka. He did not mince words while remarking that former chief minister Siddaramaiah was behind the collapse of the JD(S)-Congress coalition government in the state and said that Mr Siddaramaiah wanted to destroy the JD(S).

Showing no strong grudge against the central leaders in both the BJP and the Congress, Mr Gowda instead focused on the unholy nexus between some state leaders (B.S. Yediyurappa and Siddaramaiah). In an interview with Vinay Madhav, he asserted that the present BJP government headed by Mr B.S. Yediyurappa may not complete its term and mid-term polls may be imposed by clubbing it with elections in other states. Excerpts:

Two, the Independents had backed the Congress, so Mr Siddaramaiah asked the JD(S) to make one of them minister for the stability of the government, and we obliged. During the last few days before the government fell, Mr Siddaramaiah sought a series of changes, even in the nomination to Kempegowda International Airport Authority, and we again obliged.

The final blow to the coalition government came from three loyalists of Mr Siddaramaiah — M.T.B. Nagaraj, S.T. Somashekhar and Byrathi Basavaraj. When the party tried taking action against them, they clearly said that they were sent by Mr Siddaramaiah. Do you need bigger proof than this?

Was Mr Siddaramaiah hell bent on bringing down the government?
Basically, Mr Siddaramaiah wants to finish off the JD(S). This was the party that made him a leader and still even when he was CM, he wanted to finish the party. He took away eight of our legislators and made them cross-vote during the elections to the Rajya Sabha. Later, he made them contest on a Congress ticket. The people of the state know what happened to them.

The then Speaker did not take any action against them. Even the Congress central leadership knows everything, but they have their own problems. So, the government had to fall after the Parliament elections.

Soon after the coalition government fell, you started rebuilding the party alone. How difficult is it with the party cadre’s morale so low?
There is nothing like that. From former CM Veerendra Patil’s time, there have been efforts to destroy me politically and it is going on even after 40 years. While they try to destroy me from one side, I keep reorganising from the other side. It is nothing new to me.

However, I am not going to spare the people who used my shoulders to grow and tried to destroy me. I have already started working in 13 constituencies (of the disqualified rebel MLAs) and the JD(S) will alone fight both the Congress and the BJP in the coming byelections. We are not going to join hands with anyone.

I would also like to recollect here that during the last Assembly elections, Rahul Gandhi went on saying that the JD(S) was the BJP’s B-team in Karnataka. That polarised minority votes and cost us around 22 seats. Who told Mr Gandhi that we were the BJP’s B-team and now, who has helped the BJP to come back to power?

I am holding a minority community rally in the city and also rallies of women, backward and other classes, for whom I have worked throughout my life. I am a worker and I will work alone.

I don’t think the Union government has anything to do with the state government’s decision. I am also not bothered about the outcome of the case either. They are trying to build up a big story against Mr Kumaraswamy.

What do you think about the present BJP state government?
Going by developments in New Delhi, I don’t think this government will complete the remaining term of three years and eight months. The central leadership is considering exactly the opposite of what state leaders are thinking. They are not interested in accommodating the 13 disqualified MLAs, fearing a bad name for their party all over the country. I feel that the Centre will club Karnataka with other states going to polls and go for mid-term polls.

In your political career, many people have left you. However, A.H. Vishwanath was a special case. How did you feel when he left?
People have come and gone in my life. Basically, Mr Vishwanath was a sworn enemy of my family. He and H.M. Revanna were instrumental in inducting Mr Siddaramaiah into the Congress after he quit the JD(S). S.M. Krishna had sent them both for negotiations. However, Mr Siddaramaiah ensured Mr Vishwanath’s exit from the Congress. I was against Mr Vishwanath joining the JD(S), but Sa Ra Mahesh and Mr Kumaraswamy got him in.

Basically, Mr Vishwanath wanted to become a minister, but we could not make him one. I made him party president and he did not want that post. When the rebel MLAs formed a group, he joined hands with them. I did not feel anything was surprising about that.