So much to be done in India, says a desi neta from Japan

Yogendra Puranik, a naturalised Japanese, secured 6,477 votes, the fifth-highest of the 226,561 valid ballots cast on April 21. 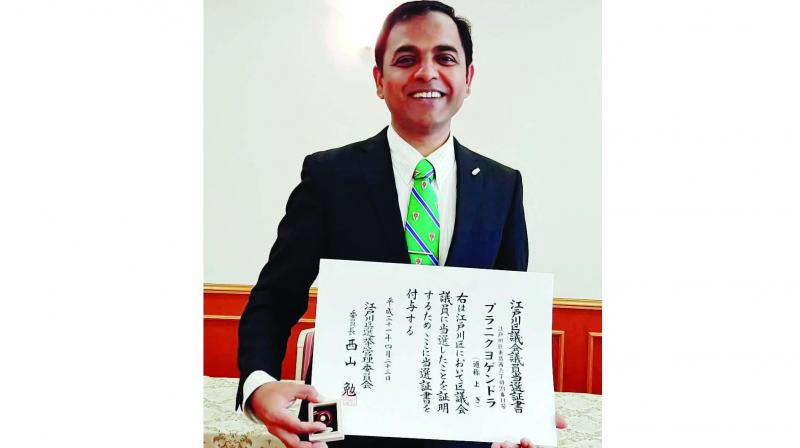 In an interview to Gargi Chaudhry  of this newspaper, Yogendra Puranik shares his journey from being a banker to a politician and his views on elections in India.

An Indian-origin Japanese man who is known as “Yogi” has been elected to Tokyo’s Edogawa Ward Assembly. The 41-year-old Yogendra Puranik became the first Indian to win an election in Japan.

He initially joined “Jisedai wo ninau kai” (Organisation for the next generation) and later joined the Constitutional Democratic Party (CDP). He contested elections from the CDP, which is the largest Opposition party now.

Mr Puranik first arrived in Japan in 1997 as a university student and returned two years later. In 2001, he went back to Japan to work as an engineer.

Later, he worked for a bank and other companies and has resided in Edogawa ward since 2005.

He felt his ties strengthened with Japan after the 2011 earthquake and tsunami disaster while visiting the affected areas to cook curry with Indian friends from Edogawa ward to share with the victims.

Around three years ago, my ward (Edogawa) started a Little India programme which was going in the wrong direction. I requested the ward to talk to the community, rethink their objectives and make them practical. However, that did not work.

That made me realise that I should not be sitting outside, complaining or requesting but should join politics and make the changes.

Why did you choose to contest elections in Japan?

Since 15 years, I have been living in Edogawa, Tokyo. I grew here as a professional and as a parent as well. I have actively worked here in local social organisations, PTA, etc.

Though Edogawa is a great place to live, I thought it needed some practical changes for the next generations. There were some issues that made me realise that I should get in the system and make the changes that I wish to see in society.

The long-pending issues were the unavailability of creches and kindergartens, downgrading of education in public schools, less job opportunities and insufficient services for the elderly.

The numbers of foreigners, including Indians, living in Edogawa are high and the authorities have not taken any concrete steps towards the betterment of their lives.

Not enough initiatives have been taken to bridge the gap between the foreigners and the Japanese.

Speaking about infrastructure in Edogawa, it is very old and does not have any multi-purpose infra with offices, restaurants, cinemas, etc.

How are Indian elections different from the ones in Japan?

The elections in Japan are very systematic. In Japan, even a newcomer is offered enough explanation to enter politics or to contest elections. There is a lot of documentation, minute control of funds and the campaign is done in a gentleman’s spirit.

Here, all candidates respect each other and there is no “garbage throwing”.

The Japanese police are always on alert and they keep a check that no candidate breaks the rules. However, home and personal visits are not allowed during the campaign.

Being an Indian origin, was it difficult to contest elections? If yes, then how?

Till the last minute, I was not sure how many people would vote for me. My participation, however, in local organisations, active volunteering in the Indian community, my restaurants and my Edogawa Indian Culture Centre gave me solid touch with the citizens.

Also, I think my speeches played an important role to convince the public.

Overall, being an Indian-origin Japanese was not easy but my guide, sitting MP Akihiro Hatsushika, the team and everyone did a fantastic job.

In future, are you willing to come to India and be a part of Indian politics?

As of now, coming back is not on the cards. I do not consider myself as a politician. I wish to look it as an improvements officer job and work on development as a process. I am not going into the Assembly to play politics.

What are your views on Indian politics?

Indian politics is not transparent at all, and we are not seeing any aggressive changes. I feel more can be done and can be achieved.

According to you, in what ways can being a banker help you in your political journey?

For me, a banker’s job is and will be special. A banker safeguards people’s money with utmost care, following strict compliance and being process-oriented. As a legislator, I wish to bring that culture into my work.

What are your political ambitions?

Big changes ask for bigger roles. I would like to contest for the post of mayor in the next term. However, before that I must do enough for Edogawa.

With the 2019 Lok Sabha elections now going on, what do you think of Prime Minister Narendra Modi? Who do you see as our next PM?

If Narendra Modi is re-elected, I wish he takes us to the next stage from a practical perspective, in the sense what people really want and in a transparent way.

There is so much to be done.