Opinion   Oped  01 Mar 2020  The RSS is not amused with Modi’s cult of personality
Opinion, Oped

The RSS is not amused with Modi’s cult of personality

The RSS was not amused to see Modi build a cult of personality from the very outset. But it shrewdly assessed both cost and benefit. 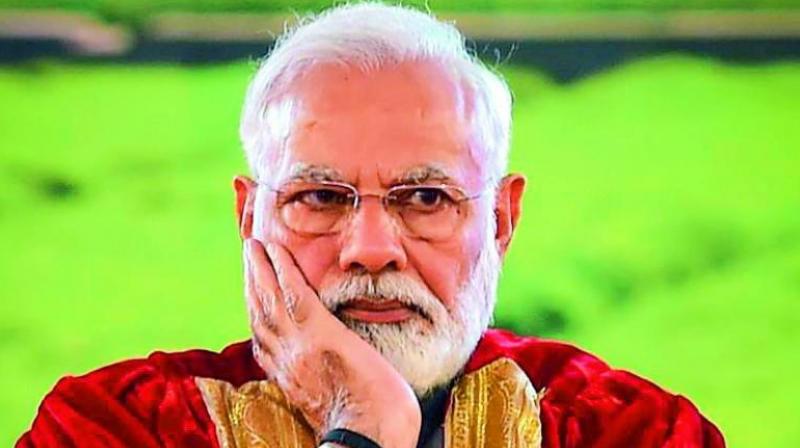 There is no way the BJP will (or, indeed, can) split from the RSS. Splits are between equals. The BJP is a creature of the RSS. Without it the BJP will collapse. Not only does the RSS provide the muscle, cadres who constitute the indispensible foot soldiers during elections, but also the top officials. BJP general secretary Ram Madhav was an official of the RSS which seconded him to the party; thus riveting its control of the BJP. Narendra Modi may be a lifelong pracharak (activist) of the RSS, but he could not have become Prime Minister without its full support.

So why pose any question about an impossible split? It is because the RSS has begun loudly cracking the whip. It has always had an ambivalent attitude towards its political wing’s leaders. It got removed two presidents of the Jan Sangh, the predecessor to the BJP, and one of the BJP, L.K. Advani. His crime was to praise Jinnah in the visitors’ book at the Quaid’s mausoleum in Karachi. The sack was swift and brutal.

The RSS was not amused to see Modi build a cult of personality from the very outset. But it shrewdly assessed both cost and benefit. It now had its own man in power to do it many favours, a man committed to its ideology of hate. But here comes the rub — it did not like to see him get bigger than the boots it provided; especially if his capacity to deliver was disturbingly on the decline. The state of the economy is worrisome, as is the spate of political setbacks.

In Maharashtra, it was ousted by its ally, the Shiv Sena, which grabbed power in a coalition with the Congress and NCP. It had to pay court to Sonia Gandhi in New Delhi and accept the much-derided word “secular” in their joint declaration.

What drove the Shiv Sena to this pass were inputs from its cadres complaining that the BJP was slowly cutting away their ground in Maharashtra, exploiting the affinities of their ideologies. The BJP lost the polls in Jharkhand and most resoundingly in New Delhi. Reports from Uttar Pradesh warn that installing the bigot Yogi Adityanath as chief minister has proved counterproductive. All this combined to make the RSS more receptive of its cadres’ warning: “we are losing ground thanks to the BJP”.

For an organisation wedded to a revoltingly coarse ideology, the RSS has always revelled in an ambiguous approach. RSS general secretary Suresh “Bhaiyyaji” Joshi sounded the alarm on February 10 by distancing the Hindu community at large from the BJP. The BJP, he asserted, was not “synonymous” with the Hindu community; implying that the RSS alone could speak on its behalf. What was left unsaid is that the RSS can choose or even create a different political instrument. This was said in 1981 too, when the RSS’ Nana Deshmukh advocated support for the Congress. Joshi pointedly cited the Durga Puja pandals being headed by members of the then ruling party in West Bengal, the Communist Party of India (Marxist), incredibly enough.

This warning to the BJP is coupled with a clear overture to others: “we are ready and willing to make a deal with you too.” On February 26, RSS supremo Mohan Bhagwat urged members to widen their sphere of activities among the people regardless of religion, caste, language or region.

The RSS English weekly Organiser published a scathing account of the BJP soon after the Delhi electoral debacle, writing that Modi or his Man Friday Amit Shah “cannot always help out” in state elections. The subtext, of course, is that only the RSS can. All ambiguity was shed with this explicit censure: “The RSS and the BJP have always believed that the organisation is more important than the leader. But in the current BJP most people feel that only Modi and Shah can win them elections. This is a very bad trend.”

The RSS will keep a close eye on this. The BJP and Modi himself will silently chafe as the RSS tightens the screws. The true character of the RSS emerges from an affidavit filed in 1948 by two of its most senior officials. One was the brother of the then supremo M.D. Deoras, the other its supremo during the Babri Masjid demolition in 1992.

What both stated in a solemn document is a good revelation of the RSS’ true character. They frankly said that the “aims [and] objects [of the RSS] are distinguished from policy by providing two independent clauses in the Constitution. It is common knowledge that policy is not a permanent feature and changes or is changed from time to time. It is evident that this clause was included in the Constitution so as to protect the organisation from the misconceived allegations and charges. That is why faith in evolution and peaceful and legitimate means is expressed. So also tolerance towards all [faiths]. ... [I]t does not indulge in politics, i.e. day-to-day politics, though Sangh has a political philosophy within its wide sweep of cultural work. It is possible for Sangh to change this policy and even participate in politics.”