Mutilation of Kashmir: The birth of a diehard new breed 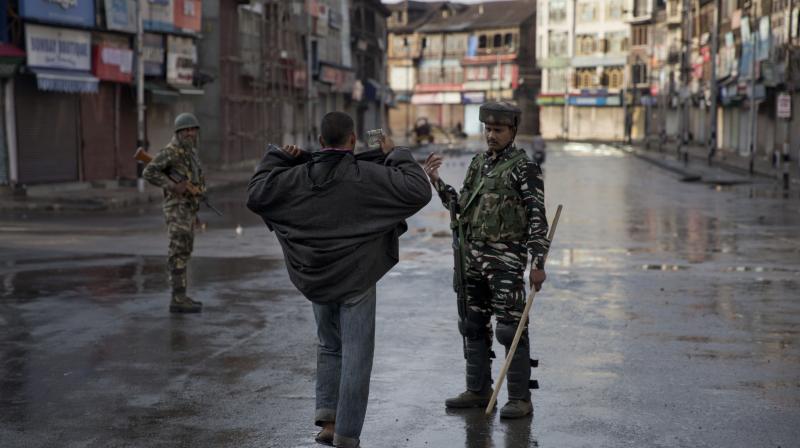 A young Kashmiri man is frisked by a paramilitary trooper in Srinagar. (AP file photo)

Srinagar: Jammu & Kashmir’s separatist camp has been in a state of stagnation since August 5 last year when the central government cancelled the state’s special status and bifurcated it into two Union Territories.

While the mainstream political leaders have been by and large silent, even the key faces in the separatist camp, whose writ once raast sections of the Muslim population in the Kashmir Valley, have failed to play any predictable or even customary role in Kashmiri politics during the past one year. This has put the entire separatist camp in disarray and left its supporters dispirited and bewildered.

Weeks after the New Delhi moved in on J&K last year, it was widely rumoured in the Valley and beyond that some of the separatist leaders who had been detained signed bonds to secure their release. As also reported by sections of the media, the detainees, mostly politicians from both mainstream and separatist camps, were offered a release by New Delhi on the condition that they signed a bond agreeing to cease political activities.

Mirwaiz Umar Farooq, Kashmir’s chief Muslim cleric and chairman of one faction of the Hurriyat Conference, whose name figured in these reports, was quick to deny that he had taken oath not to indulge in any political activity. He claimed that apart from putting him under house detention, the authorities had severed his phone and internet connections, making him incapable of communicating with people.

Even after the lapse of one year, the separatist leadership remains in the doldrums, unable to guide their supporters on the issues they once used to insist were a ‘matter of life and death’ for Kashmir and its people. They issue occasional guarded statements but one swallow does not a spring make.

In June, separatist patriarch Syed Ali Shah Geelani quit his faction of the Hurriyat Conference. The move is seen by many as escapism. But sources close to the nonagenarian leader said that his hanging up his boots had more to do with his being sidelined in decision-making and underhand disparagement of his role within the amalgam.

Geelani, in an open letter, claimed that his repeated requests to meet up for evolving a strategy to face up to the post-5 August 2019 situation were not conceded by his close aides. He also spoke of financial irregularities within the amalgam and, if the sources are to be believed, some of his colleagues were hobnobbing with the government authorities of which he wanted to steer clear of “before they could bring disrepute to him and undo his sacrifices”.

The Modi 2.0 government came face to face with several formidable adversaries in J&K, one of them being separatists. In its first line of attack, almost the entire Jamaat-e-Islami's J&K leadership was jailed. Soon the right-wing party was banned by the Union Home Ministry for five years after declaring it an “unlawful association”.

Then the sword was raised against other prominent separatist parties and their leaders like JKLF and its chairman Muhammad Yasin Malik to make the vocal section of the separatist camp completely inactive. Most of them were arrested by the National Investigation Agency (NIA) on charges of money laundering and are currently lodged in Tihar jail.

Simultaneously, the military campaign against militants was toughened and made widespread. As per official statistics, more than 250 militants including a couple of dozen commanders have been killed since August 5 2020. While the security forces see these killings a major achievement, the BJP government at the Centre insists it has broken the Kashmir jinx and kept its promise of eliminating militancy in the erstwhile state. Syed Salauddin, chief of formidable militant outfit Hizb-ul-Mujahideen, recently admitted to the militants suffering heavy losses and the situation not being good at all.

Independent watchers, however, say the Modi government’s brutal policies towards J&K have, on the one hand, only decimated the pro-India constituency in the politically sensitive Valley, and, on the other, provoked the rise of a young generation with a die-hard attitude. To handle it might not be an easy task. The not-so-good human rights situation in J&K has already prompted various international organizations and, also some countries other than Pakistan, to call for corrective measures.