Why are we so obsessed with statues?

Maharashtra leads in the statue stakes, with Chhatrapati Shivaji Maharaj dominating every square and junction. 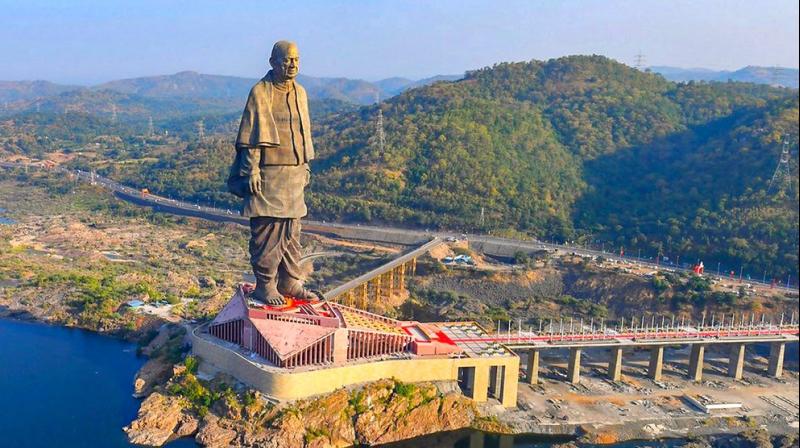 The 182-metre structure of Sardar Vallabhbhai Patel is touted as the world's tallest. (Photo: @PMO/Twitter)

India is in the grip of statue fever right now. And people across the world are sniggering. Several Indians are sniggering as well. We are shaking our heads and saying to ourselves we have no money to feed the hungry. But we have mega funds to build monumental statues. We cannot provide good roads, but we are happy to support more statues. We need many, many more hospitals and health centres, schools and colleges, public parks and gardens… but no. We choose statues. The thing is, it is our money. Taxpayers pay for statues of political leaders representing a crazy assortment of belief systems — even some we actively detest. But nobody asks us — right? Who are we? Nobodies. “The Statue of Unity” is but one more extravagance. It had to be the biggest and tallest, of course. Which it is. And it had to be in Gujarat. Which it also is. Some would ask, “Where else should Sardar Patel’s statue be erected if not in his own state?” Fine. No quarrel with the statue, per se. It’s a wonder it has taken us over 70 years to acknowledge this great man’s contribution. Suddenly, Sardar Patel’s legacy is being appropriated by the ruling party, quite forgetting that the Sardar belongs to every Indian, in exactly the same way that Gandhiji does.

Years ago, when Ms Mayawati went on a statue spree (she is still at it), critics laughed at her audacity and asked why she was wasting public money. It was a great investment, not a waste. We paid for her strategy. And she reaped great dividends. Umm, lopsided logic. But we fell for it. As we always do. All those life-size granite elephants trumpeting and charging across her state were gigantic symbols of her growing power, influence and wealth. She had learned from the masters. The same way, we were tutored by the British. They left their statues behind. We removed most of them. And swiftly started building our own. In place of British kings and queens, we created our own political royalty — and soon every city in India had statues of Jawaharlal Nehru, Indira Gandhi and Rajiv Gandhi. The Father of the Nation — Mahatma Gandhi — was frequently sidelined in the rush to honour the “other” Gandhis. Statues of Netaji Subhash Chandra Bose started to pop up in a few places, but his statues were not as ubiquitous. Babasaheb Ambedkar joined the statue brigade a little later, and today, his statues compete with the Nehru–Gandhi family in terms of visibility and numbers. Garishly painted plaster of Paris busts of Ambedkar sprout up nearly every day in shanties across India. It won’t be long before a mammoth-sized statue of his is announced by a political party competing with the “Statue of Unity”. It will, of course, be taller and grander.

Maharashtra leads in the statue stakes, with Chhatrapati Shivaji Maharaj dominating every square and junction. We admire him enough to be building an ambitious statue off the coast of Mumbai, at a staggering cost of Rs 2,800 crores (the numbers change with each passing day). Our farmers are dying, it has been a terrible year for us and the devastating drought in Vidarbha has destroyed the livelihood of farming communities. But… crop failure and farmer suicides do not feature in our government’s priorities. Statues do. Just a few days ago, one enthusiastic supporter of the latest Shivaji statue lost his life when an overloaded speedboat taking reporters to the offshore site hit a rock and capsized. Citizens saw this as an omen. It is a project that has generated a huge controversy from the time it was announced. Statues today have become nothing more than big business for political parties to milk. Though how statues can generate votes beats me. Are citizens that gullible? Do they not see the absurdity of such gimmicks? Can they not tell that there is massive manipulation in the name of “patriotism”? Can statues step in and save us in a crisis? Can they feed us during a famine? Why do we need statues? What earthly purpose do they serve?

Let’s hope the next generation of the political leadership is smarter and reins in statue mania. India needs jobs, not statues. Statues are vanity projects of an earlier era. Statues are un-modern, not in sync with contemporary thinking. In today’s techno-world, statues are like dinosaurs — archaic and out of place. Create a science museum instead of a statue. That will be a fitting tribute and a fine way to acknowledge the immense contributions of our great and venerated leaders.

Perhaps, I have spoken too soon. I hear there is a statue competition underway with political parties vying with one another to announce a statue of statues. This one will be visible from space and beyond. It will be bigger, higher and broader than the Statue of Unity. The dimensions of its chest-size will determine the rest. Multiples of 56 inches have been incorporated in the initial drawings. It will be called the “Statue of Vanity,” and will be up before the next elections. Ahmedabad has been picked for this great honour. It will be paid for with the dues recovered from Mr Nirav Modi.