The very characteristics of the submarine which is being deployed by Bangladesh would reveal the possible future scenario. 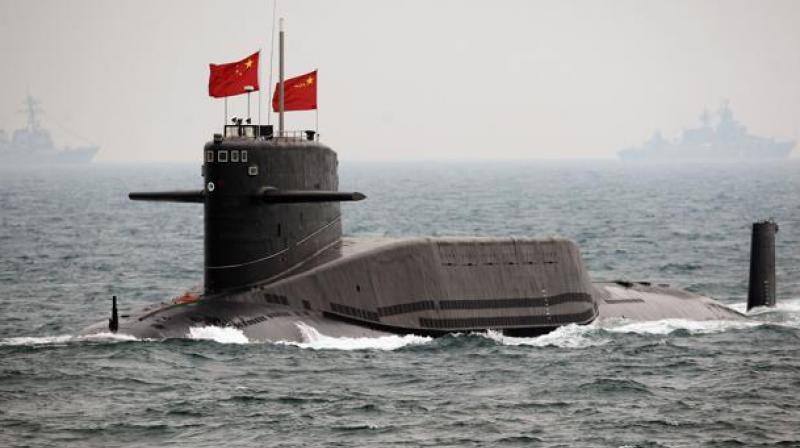 Two developments in November linked to India’s strategic interests virtually went unnoticed owing to media hype on demonetisation in India and Donald Trump’s election victory in the United States. Stealthily, China’s money and military power penetrated deeper than ever before in the western and eastern flanks of India. On November 13, Chinese ships opened a new trade route via Gwadar port in Pakistan and set off for Bangladesh, Sri Lanka, the UAE and the European Union.

Since China is adept at playing diplomacy through symbols like that of picture script alphabets, the destinations of the ships spoke louder than announcements. The voyage to Dhaka and Colombo constituted the eastern and southern flank (water bodies) of India while the UAE and EU indicated China’s prosperous customers from the oil-producing basin of the Persian Gulf and the quintessential “one Europe-one market” for Chinese products.

The second event happened on November 14, in India’s eastern flank, Bangladesh took delivery of its first submarines, bought from China, as it seeks to boost its naval power in the Bay of Bengal. Bought at an estimated price of $203 million, its genesis goes back to the December 2010 announcement of Prime Minister Sheikh Hasina for enhancement of “effectiveness” of the Bangladesh Navy.

From an overall perspective, one may well wonder the efficacy and potential effectiveness of the Bangladesh Navy. “Effectiveness” regarding what? Against whom? Myanmar or India — the two contiguous neighbours of Dhaka?

It may be recalled that a Navy is built and operated commensurate with the coastline of its nation and the maritime/marine interest thereof. Thus, with a 4,104 nautical mile coastline, spanning from the northern edge of the Arabian Sea in the west to the Sunderbans delta in the northern Bay of Bengal, India stands head and shoulder above the combined coastline of 1,428 nautical miles of Myanmar’s 1,042 and Bangladesh’s 386 nautical mile shoreline.

However, it is the right of sovereign Bangladesh to decide as to what it wants and how it operates its surface and sub-surface naval assets as long as it does not pose a threat to India’s security and economic interests or the friendly countries thereof in the vicinity.

Nevertheless, the recent acquisition of Chinese submarines does create a potential “situation” which could very well be a source of future turbulence for the three South Asian nations of India, Bangladesh and Myanmar owing to the proxy presence of Chinese ideas, money and hardware. Suddenly, the eastern flank of India has become live, the claimed benign intention of Dhaka notwithstanding.

The very characteristics of the submarine which is being deployed by Bangladesh would reveal the possible future scenario. Originally designed by the Soviets, it was adapted by the Chinese in the early 1970s. Initially, these boats were accident-prone. Of the first three, one had to be scrapped after a fire and another was decommissioned. Again, 361 personnel were killed in an April 2003 accident owing to “carbon monoxide poisoning”. It is this 1,609 tonnes surfaced and 2,147 tonnes dived vintage Ming-class boats, which have been refurbished in China and transferred to Dhaka.

Information from Jane’s Fighting Ships 2016-2017, the world’s leading open-source maritime defence reference resource, shows that the submarine has a range of 8,000 nautical miles at 08 knots snorting and 330 at 04 knots dived.

That is more than sufficient for a submarine to operate in a water body like the Bay of Bengal. Armed with “21 inch torpedoes tube, or 32 mines in lieu” thereof, one wonders who possibly could be Bangladesh’s geographical or political target practice strategy? Myanmar or India? Or Pakistan, that is thousands of miles away? Or Al Qaeda? ISIS? Jamaat? Or someone else?

The present submarine supply of Beijing to Bangladesh appears as China’s diversification push from the Asian heartland’s “one-belt-one-road” to the waterfront. It is “one-belt-one-sea-route”, which reflects the wisdom of Hans to oversee, both friend and foe. This will cover its own flank, from landing and loading points of the land, originating from the port.

How? A glance through map reveals the scenario. Shanghai to Sunderbans, the shared territory of Delhi and Dhaka, is more disadvantageous to the former than the latter, as it takes at least 15 days to cover through sea. And Kunming (the capital city of Yunnan province) to Chittagong or Cox’s Bazaar could be covered in less than three days through road. So why not interface and mesh the land and sea route through the trade of butter and supply of submarines? The recipient country would be glad to secure outposts of the big brother. Beijing does not have to be present. Dhaka also can choose between a preferable remote, rather than a proximate big brother.

Similarly, if the Asian heartland route from Beijing to Balochistan could be interfaced with the sea-lane voyage-time from Shanghai to Gwadar by supplying and building naval assets of Islamabad, the same purpose of “checkmating” by proxy powers would serve the all-round trade, commerce, finance and security interest of the Hans of Chung Kuo (Middle Kingdom).

The issue today, therefore, is not confined to Bangladesh’s procurement of Chinese submarines.

It goes much beyond what can be seen from inventory and the planning of the Bangladesh Navy’s small 386 nautical mile coastline. It began long ago. In 1989, Hudong Shipyard in Shanghai built the 1,729-tonne Jianghu I class frigate. In 2014, two Jianghu III Shanghai-built frigates were transferred. Now the Wuhan Shipyard origin 1,330 tonnes Type C13B class corvette were handed over to the Bangladesh Navy on December 11, 2015.

Dhaka has inducted at least three dozen missile fast-attack craft, offshore patrol craft and amphibious ships of Chinese make. Interestingly, the same China which is arming Dhaka to the teeth (for its own geostrategic hegemony across South Asia under the guise of “one-belt-one-road” and “one-belt-one-sea-route”) vehemently opposed East Pakistan becoming the independent nation state of Bangladesh.

The reason was that the West Pakistani Punjabi rulers of 1971, who are the rulers even today, were (and still are) the all-weather friends of China, in the western flank of India. The irony is that the same China now wants Bangladesh to become its all-weather, strategic friend as well to outflank India in the east. China’s Ming-class submarine constitutes the shining symbol on the eastern flank of India.