The right to choice of food is a part of the right to personal liberty, conscience and privacy. 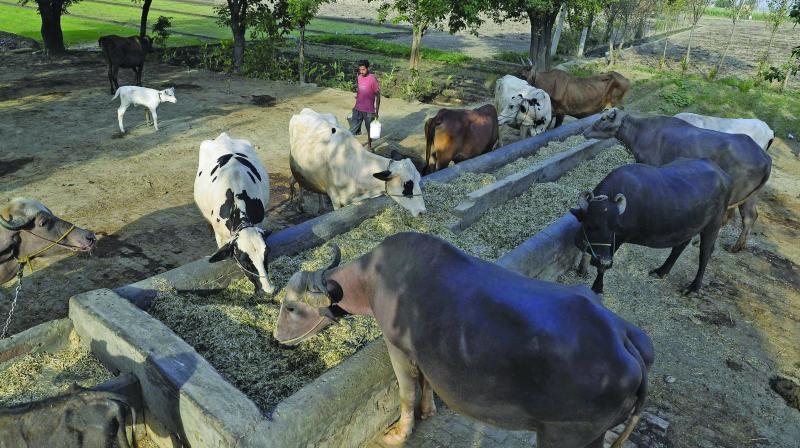 Centre’s ban on cattle trade at livestock markets seen as a ploy to prohibit cow slaughter.

The Narendra Modi government’s recent notification prohibiting cattle trade at animal markets for slaughter does not explicitly ban beef, but it’s an effective ban on cattle slaughter with huge social, political and business ramifications. The notification says animal markets would only be able to trade cattle for agricultural purposes such as ploughing and dairy production.

The move has triggered debates across India on vegetarianism, tolerance and also whether the government can tell people what they should or should not eat. It is superficially a populist move aimed at Hindu majority appeasement and a setback to the Muslim-dominated meat industry.

The ban will also impact beef markets around the world. India was the second-largest exporter of beef last year, behind Brazil. India officially exports buffalo meat, but vigilante groups have been claiming cow meat also sneaks into supplies abroad.

Cow slaughter is illegal in almost all states except Kerala, West Bengal and most parts of the Northeast. After the BJP came to power at the Centre in 2014, many observers say there has been a perceptible crackdown on cow slaughter and beef sale.

Ever since the environment ministry’s new gazette notification made national headlines, there have been questions: Will the rules lead to a blanket ban on beef? Is the central government stepping into a state subject? Will cattle trade come to a grinding halt?

Beef is one of the most affordable sources of protein, especially for poor people. Slaughtering animals for food and offering sacrifice in religious places have been a part and parcel of the cultural identity of most communities in the country.

The ban amounted to interfering with the right to practice any profession or to carry on any occupation, trade or business as guaranteed under Article 19(1)(g) of the Constitution.

Further the rules define the term “cattle” to mean bovine animals, including bulls, bullocks, cows, buffaloes, steers, heifers, calves and camels. As a result, a complete ban has been imposed on the trade of sale or purchase of animals defined as cattle.

The right to choice of food (non-vegetarian or vegetarian) is a part of the right to personal liberty, conscience and privacy. By imposing a ban on the slaughter of animals for food, citizens with a choice to eat the flesh of such animals would be deprived of such food and it violates the right to food, privacy and personal liberty.

The Centre says there is no ban on slaughter or sale of beef as the rules only regulate cattle trade for slaughter through cattle markets. It says the sale of animals for slaughter from farmhouses has not been banned. It says the ban will ensure that beef markets would be healthier and buyers would have greater confidence that they are not eating the beef produced by slaughtering sick animals.

In the words of Supreme Court advocate Vipin Nair, this contention is not correct. He says the rules dampen the federal structure as laws on cattle slaughter are outside the purview of Parliament as it is a state subject in the Constitution. What cannot be done directly cannot be done indirectly. At least one High Court (Madurai bench of Madras HC) has intervened and stayed the rules and a series of litigation is inevitable.

Though “prevention of cruelty to animals” is on the concurrent list, which gives the Centre powers to make laws regarding it, to segregate only cattle from animals like pigs, chicken, goats from the purview of cruelty to animals violates the basis of equality enshrined in Article 14 of the Constitution, says Mr. Nair.

Referring to the seventh schedule to the Constitution, he says that issues concerning markets, fairs and preservation or protection and improvement of livestock fall within entries 28 and 15 of the “state list” and thus only the state legislature and not the Centre is empowered to enact laws and frame statutory rules on those subjects.

A state government can still go ahead and make its own law on “cattle”. It is no wonder that states like Kerala, Karnataka, West Bengal, Meghalaya are up in arms against the Centre’s encroachment into states’ powers.

According to national president of All India Association of Jurists, Antony Selvaraj, the Prevention of Cruelty to Animals Act, 1960 was meant to treat animals in a humane manner and to ensure the least painful way of slaughtering them. However, the present rules prevent the sale of cattle at animal markets for the purposes of slaughtering. This goes beyond the stated objective of the parent Act and hence is questionable and unconstitutional. The rules tend to put an end on the slaughtering of not just cows but also other animals defined as ‘cattle’ under the Act.

If one goes by the timing and the intent, there is a feeling that the BJP is actually quite happy with the Hindu vote consolidation that Muslim hunting might bring about if the rules are enforced in the guise of cattle protection.

But the latest move has the potential to destroy social harmony and the secular fabric of this country. The NDA government’s tacit support to “cow vigilantism” has only encouraged the BJP and its cadres justifying the ban so as to strike at the root of India’s democracy.