The surgery was declared a huge success and greeted by much applause, as countless images of a smiling Emaan were released to the press. 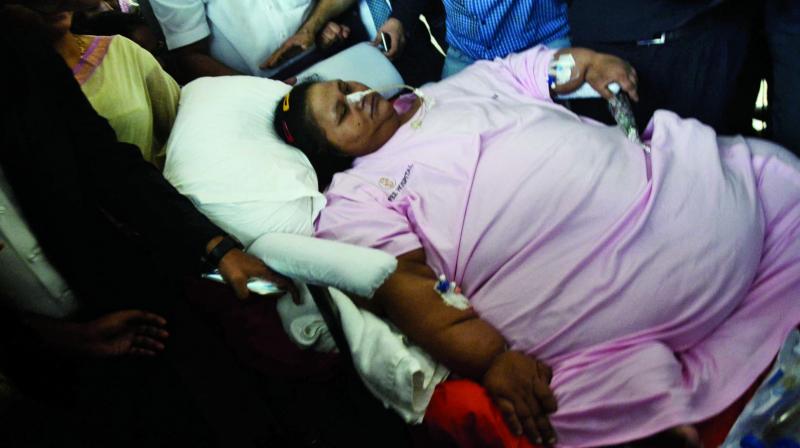 Egyptian national Eman Ahmed is carried on a stretcher towards an ambulance on Thursday. (Photo: Shripad Naik)

I had closely followed the complex, international case of Emaan, a patient from Egypt, whose sister Shaimaa had accepted the offer from a Mumbai-based bariatric surgeon to operate on the 36-year-old woman and give her a better quality of life. It was a great story, which was lapped up by the media, not just in India, but internationally as well. It started on a dramatic note, with the demolition of a wall in Emaan’s modest home in Alexandria, as the Indian team said it was the best way to get her out and place her in a specially-created cage-like container on a crane. Visually, the impact of a nearly 500 kg (she was never weighed, believe it or not... and these were guestimates) woman being moved in this manner was indeed stunning. We gasped at the audacity of Operation Emaan, the minute details of which were flashed by the team, as the convoy made its way to the airport, onto a specially-fitted aircraft and landed in Mumbai, where, of course, a posse of press photographers was positioned to catch the historic moment. Instead of utilising the services of a large enough ambulance (we have it in Mumbai), it was decided to load the patient on to an open truck, and transport her to the designated hospital, with the lead doctor waving to the cheering crowds, like the captain of a victorious cricket team.

Everything, it would appear, was going swimmingly well. After all, the source of all information was the host hospital’s public relations person — not an independent body. The surgery was declared a huge success and greeted by much applause, as countless images of a smiling Emaan were released to the press. Her sister, Shaimaa, who had originally initiated the entire process last September by posting an appeal on Facebook to save her sister’s life, was also widely photographed, beaming happily and thanking all the doctors. So far so good. The can of worms was opened much later, when the honeymoon period ended, and grim reality kicked in. Emaan was far from well. But the team didn’t want to acknowledge anything was wrong. When Shaimaa opened her mouth, she was accused of interfering and dubbed an ingrate. Public opinion damned Shaimaa as all sorts of unsavoury stories did the rounds. Since Shaimaa’s English language skills are shaky at best, she was unable to effectively communicate what exactly was going on at the hospital. Whatever she said was derisively dismissed and there were insinuations galore to suggest she was a money-grabbing sibling, who was having such a good time in Mumbai that she had no intention of leaving in a hurry! Shaimaa was painted as a she-devil, a quarrelsome, aggressive harridan, out to create trouble with her unreasonable tantrums. Emaan, declared the doctors, was fit enough to leave, and take a commercial flight home (international experts pooh-poohed such a preposterous plan). Several contradictory reports were made public with gross errors and a total lack of consistency. Nobody was sure what Emaan weighed when she checked in nor how many kilos she had lost, post-surgery! As for the other complications that had come up — her multiple seizures etc — those were casually explained away as being the result of an old condition. Hospital authorities insisted on Emaan vacating her room... and that would have been the end of this sorry story had Shaimaa not spoken up.

Shaimaa continued to be furious.
It was obvious something had gone horribly wrong. But what?

Here’s the thing: Shaimaa had opted to be treated in Mumbai, even when she had two other offers from leading hospitals — one in Dubai, the other from the VPS group in Abu Dhabi (where she is, currently). VPS runs five hospitals in India at present, with ambitious plans to set up a few more. According to Shaimaa, she was misled and misrepresented by the leading doctor and his team in Mumbai, by assuring her Emaan would be taken care of till she was well enough to regain a better quality of life, a process that could take up to a year or longer. Shaimaa insisted (and provided visual proof) that unlike their claims that Emaan could not sit or get out of bed for the past 20-odd years, not only could she do both, but she was capable of peeling potatoes, seated on the floor of her family home. Plus, all that drama with the wall of their home being demolished etc was unwarranted as there was a large enough elevator in their building, capable of bearing Emaan’s weight. Nor did she have to be airlifted via a crane when other routes were available. Things started to deteriorate, according to Shaimaa, when Emaan’s use as a publicity ploy had diminished and her health started to fail. Rather than addressing the grave risk to a patient’s life, the hospital authorities appeared to be hell bent on getting rid of her before something alarming happened and negative publicity took the sheen off their own accumulated glory. Emaan was abruptly shunted out of the special room where so many staged photo-ops had taken place. Apart from the nursing staff, most of the doctors treating her stopped visiting or caring. And the official narrative shifted overnight from Emaan’s precarious health, to her sister’s “bad” attitude.

The real reasons behind the fall out need to be understood. India is aggressively positioning itself as a destination for medical tourism. Emann’s surgeon had performed bariatric surgery on at least two very powerful politicians earlier. There was a lot at stake for him personally and the hospital too. It became a prestige issue, given the mega publicity Emaan generated. Then came the delicate question of Egypt-India diplomatic relations. Shaimaa was advised by her own government to lie low and keep quiet. Here was a lone woman in a strange country fighting a solitary battle on behalf of her seriously ailing sister. Shockingly enough, not a single women’s organisation in India came forward to show solidarity and offer support. On the other hand, a female politician demanded an apology from Shaimaa for “insulting” the doctors and the hospital. Shaimaa flatly refused to apologise, even though she was facing tremendous pressure at the time.

Hospitals are big money-spinners. Healthcare spells big business. We know that. But when doctors behave more like ruthless businesspeople, and treat their noble vocation as a “dhanda” for personal gain, it is time to worry and expose them. Every aspect of the Emaan saga was shrewdly stagemanaged and cleverly manipulated from day one. Emaan’s trauma was converted into a freak show. To treat a patient as a product to be showcased and marketed is a grave travesty of medical ethics. A hospital is not a film studio in which doctors perform for the cameras. When showbiz enters the picture, and celebrity-hungry doctors adopt the same tactics for staying in the news as publicity-mad movie stars do, civil society needs to sit up and say, “Enough!”

Here’s hoping Emaan and Shaimaa are treated with more dignity and respect in Abu Dhabi. They deserved better.