One thing is almost certain. India will have very few now batting for it in the Kashmir Valley, and the Muslim dominated Poonch region of Jammu. 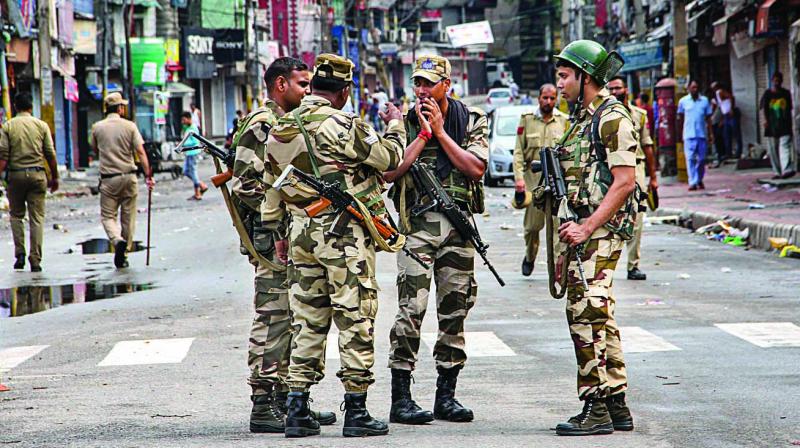 The Narendra Modi government’s action in abrogating Article 370 of the Constitution is reminiscent of the precipitous “demonetisation” exercise that marked the downturn of the economy, which still shows no sign of looking up. The sudden bifurcation of the erstwhile state of Jammu and Kashmir into two Union territories (UTs) of J&K and Ladakh effectively means liberating Ladakh from the troubled state, but leaving behind a union of two very dissimilar regions, one mostly Muslim and the other mostly Hindu. It will only end up making a bad situation worse.

The new UT of J&K effectively means an end to full democracy and self-government, and leaving an area bigger than many states of the Indian Union, with a population of over 14 million with a government with much less power and authority than enjoyed by the erstwhile J&K state. For all practical purposes, it will be directly ruled by Delhi. We have seen how the Union government has emasculated the Delhi government, leaving the people of Delhi with little say in their government. Managing Delhi is a lot easier, but managing an insurgency-ridden territory striving for “azadi” might be a bone too hard for the Modi government to chew. One thing is almost certain. India will have very few now batting for it in the Kashmir Valley, and the Muslim dominated Poonch region of Jammu. When the Modi government and the RSS don’t share the aspirations of a modern, egalitarian and truly secular nation, it would be quite ridiculous to expect the people of Kashmir and its leaders to aspire for it.

It would seem that the lessons of Nagaland have not been learnt by this government. There, after being bogged down in strife for over six decades, the Modi government seems to have agreed to a degree of autonomy unlike anything conceded to any region in India. This new arrangement seems to go well beyond what Article 370 gave the erstwhile state of J&K. Instead of democracy taking a step forward, it has taken a huge step backwards.

Kashmir is the northernmost geographical region of South Asia. Until the mid-19th century, the term “Kashmir” denoted only the valley between the Great Himalayas and the Pir Panjal mountain range. Muslim rule was ushered in by Shamsuddin Shah Mir (1339-42), a courtier in the court of King Udayanadeva, who seized the throne after his death. The Mughals took control in 1586 during the rule of Jalaluddin Akbar. The region came under the control of the Durrani Empire in Kabul from 1753 to 1819, when the Sikhs took over. In 1846 the treachery of Gulab Singh, a Dogra general and governor of Jammu, was repaid when the British gave him Jammu for it and further turned over the Kashmir Valley to him for `75 lakhs. These treaties formed the so-called princely state of Jammu and Kashmir and Gulab Singh became its first maharaja. This was also the first time that Jammu and Kashmir became one administrative entity.

As governor of Jammu, Gulab Singh had also captured Ladakh and Baltistan. His son Ranbir Singh added Hunza, Gilgit and Nagar to the kingdom. Thus, a composite state of disparate regions, religions and ethnicities was formed. This is reflected in the present-day demographics. The Kashmir Valley, of about 6.9 million people, is 96.4 per cent Muslim, with Hindus and Buddhists accounting for just 3.6 per cent. Jammu, which has a population of 5.4 million, is 62.6 per cent Hindu and 33.5 per cent Muslim, mostly concentrated in Poonch. Ladakh has a population of just 30 lakhs, with its 46.4 per cent of Shia Muslims concentrated in Kargil, 40 per cent Buddhists concentrated around Leh and 12.1 per cent Hindus. The Pakistan-occupied Kashmir areas, including Gilgit-Baltistan, are almost 100 per cent Muslim. The total population now of J&K is 14.6 million, PoK is 4.05 million and Gilgit-Baltistan is 1.8 million.

The purpose of elaborating on this is twofold. Historically, all the regions of Jammu and Kashmir are part of the present narrative of India’s composite history. Despite its preponderant Muslim population, the history of people of the Kashmir Valley is intertwined with all the different local histories of the many nationalities of present-day India, which is also home to the world’s second-largest Muslim population. There is no separate Kashmir story as there is for Afghanistan or Nepal. It was always a part of the Indian main, and except for a brief period of rule from Kabul. There is no cause or case for a separate Kashmir, like the Tibetans may have or the Palestinians have.

This J&K, with or without PoK, is an artificial entity of recent origin. It is long past its use-by date. We must also accept that reunification with the PoK part is neither desirable nor feasible. Historically, culturally, ethnically and linguistically, Jammu, Ladakh and Kashmir have as much in common as Tamil Nadu has with Punjab, or Assam with Gujarat. The destinies of the people of Jammu and Ladakh have to be delinked from Kashmir. Nor are they exactly happy to be dominated by Kashmir.

J&K is not the only princely state that acceded to India without some early hesitations and a bit of acrimony. The Maharaja of Jodhpur was an early ditherer who even contemplated acceding to Pakistan till sanity prevailed. The story of Junagadh is well known. Hyderabad, India’s biggest princely state and an inheritor of varied traditions, including the Sathavahanas, Kakatiyas, Bahmanis and Mughals, was, like J&K, stitched together with three large and distinct regions. If J&K had to be rescued by the Indian Army from tribal raiders from present-day Pakistan and encouraged and provisioned by the new state of Pakistan, Hyderabad, surrounded on all sides by former British Indian presidencies, had to be taken by the Indian Army from the dithering Asaf Jah ruler and his coterie of Muslim nobles and proselytising rabble.

In the new India, old states got subsumed and new states were created. All the many regions of the erstwhile princely state of J&K, whether in India or under the control of Pakistan, have by and large settled down under their new national identities, except the Kashmir Valley. It is now India’s seemingly intractable problem. It has festered for over 70 years. Did we miss something?

Like Malda, Kishanganj, Hyderabad and Malapuram Lok Sabha constituencies, Anantnag, Srinagar and Baramulla are the only Muslim-majority constituencies in India. There are no nationality issues in any of the former. Independent India is a nation of many nationalities, and for the first time with power vested with the people by a lively democracy. More than being a nation bound together by shared history, shared culture and shared ethnicity, it is bound together by shared aspirations assured by a Constitution, written by our founding fathers that shared idealism and nationalism forged by shared experience.

It is amply clear that many if not most people in the Kashmir Valley do not share the aspirations which bind the rest of us together. But history does not offer them any basis for a distinct and independent identity either. On the other hand, the narrative of Kashmir’s recent history has taken a distinct course different from the rest of the country. This India must recognise. In these past 70 years, India has made a hash of managing Kashmir either by placation or by the iron hand.

The Indian State has now to offer something tangible to satisfy the aspirations of most people in Kashmir, and we are talking only of Kashmir. Instead, it seems that by linking Kashmir in an unnatural union with Jammu and bringing them under New Delhi’s direct rule, India is only offering the troubled people of Kashmir a choice of jackboots.

India must seek to accommodate Kashmir with an autonomy that will satisfy the aspirations nurtured by this long period of revolt. With accession to Pakistan or complete independence not viable options, an acceptable via media must be and can be found. The breakthrough for that must happen in the minds of the rest of India as well. The heavens aren’t going to fall, if Kashmir becomes an autonomous region within India. The extent of autonomy then is the only matter for discussion. We can afford to be generous. But it appears that the Narendra Modi government is not ready for it.