Bhutan as target: Fear is the key

Bhutan and India have always respected, honoured and treated each other well in the best of South Asian traditions. 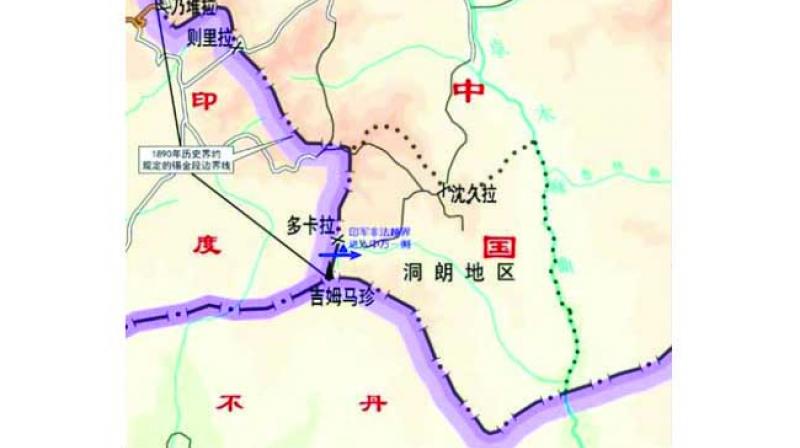 China had mentioned that Donglang is being considered in their territory since “ancient times”. (Photo: China's Foreign Ministry)

Why is one of the world’s most powerful countries, and its most populous one, now targeting tiny Bhutan in the Himalayas, with which it doesn’t even have diplomatic relations. Neither Beijing nor Thimphu has embassies in each other’s capital, and so the Chinese ambassador to New Delhi handles his country’s ties with the kingdom, one of 11 landlocked nations in Asia. (The others being Azerbaijan, Turkmenistan, Uzbekistan, Tajikistan, Kyrgyzstan, Kazakhstan, Mongolia, Laos, Nepal and Afghanistan.)

Bhutan, which shares its eastern and southern borders with India and its northern and western frontier with Tibet, is the smallest of these 11 landlocked countries. It has a 38 per cent urban and 62 per cent rural populace; and is 74 per cent Buddhist, 25 per cent Hindu and one per cent Christian in terms of religious affiliation. It is, nevertheless, important to remember that Druk-Yul (Land of the Thunder Dragon) has never had any problem with India, its southern neighbour. Far from it. Bhutan and India have always respected, honoured and treated each other well in the best of South Asian traditions.

Further, the unique character of Indo-Bhutan bilateral ties can be appreciated from the fact that Bhutan’s currency, the ngultrum, is at par with the Indian rupee, which too is legal tender in Bhutan.

Should it, therefore, come as any surprise if, in line with its determined plan of action to implement the Belt and Road Initiative (of which the China-Pakistan Economic Corridor is a part), China tries to creep into an empty geographical space of immense strategic importance? As it has planned and long contemplated in the vast Euro-Asian heartland with surplus mineral resources but deficit in human resources? Can we, therefore, say that the primary objective of China is to expand in areas of comparatively empty land, weak people, potentially vulnerable states; in order to carry out its “economic” gameplan and expand its military might?

Bhutan, therefore, is now Beijing’s target. How should we, as part of the comity of civilised nations, judge a border dispute between mighty China and tiny Bhutan? The “big brother” appears to have worked it all out, in its own way, following and implementing the “surprise, deception, mobility” pattern laid out by Sun Tzu.

Bhutan has recently detected the movement of Chinese troops in the “disputed terrain” of Doklam/Donglong located at the tri-junction of China, Bhutan and India. Understandably, Bhutan lodged its protest with Beijing, which just as expectedly brushed it aside as the protest of the weak.

Nonetheless, when the Chinese shenanigans stood exposed, India had to emerge at the scene in defence of its smaller neighbour.

As the situation keeps developing almost every day, let us get real and face facts about our unrealistic northern neighbour. What China has done to Bhutan is actually a signal to India — with Bhutan simply being a stepping stone. Bhutan is an intrinsic part of South Asia and is deeply connected to New Delhi. All Bhutanese rivers flow north to south, into Indian territory.

Here one should not forget that on October 20, 1962 China had attacked the tri-junction of the eastern end of Bhutan, where India and Tibet meet: The Dhola post of Kameng sector of NEFA (North-East Frontier Agency), crossing the west-east flowing Bhutan-origin Namka Chu river. The Chinese again are showing symptoms of identical intent in the opposite direction — the western Bhutan-India-Tibet tri-junction.

China’s main objective of targeting India, through Bhutan or otherwise, is to instill fear. To put pressure on India through diplomacy, to encourage dissidents and to create centrifugal forces in the east (such as through Naxal/Maoist violence), and in the Northeast (“liberation” movements), as it has been doing all through the past five decades.

Today, however, the alibi is “investment” — whether in software, communications, cars, consumer goods, companies and a variety of sectors. Donate, distribute and invest money in the hinterland, and creep the carbine-toting combat companies to shrink the neighbour’s frontier from the remote border land. The strategy of economics of allurement for foreigners and the creation of an empire through military force are clearly visible.

To come back to the dispute, China is showing a unilaterally created “1890” map to claim vast tracts of land and is asking India to stay away. The counter-question that readily arises is this: Why does it not stay away from Indian soil? Let India also tell Bhutan that the opening of a Chinese embassy in Thimphu could be the end of both India and Bhutan. Nine or 10 eastern and northeastern states in India could be lost forever. Thus, taking the present position in the east and the Chinese stand on India’s UN Security Council and Nuclear Suppliers Group bid; the terror groups and terror factories of Pakistan; the adoption of CPEC with a “who-cares” attitude to trample on Indian sovereignty, the emerging scenarion is posing a grave danger to the sovereign, democratic, secular, socialist Republic of India.

Finally, comes the ultimate reality. The India-Bhutan-Tibet tri-junction is 32 km from Gangtok as the crow flies, and 18 km from Yadong/Yatung (Tibet). Doklam/Doklang to Nathu La Pass is 23 km, while Doklam to Siliguri is 106 km. Yadong (Tibet) to Gangtok (India) is, as the crow flies, 33.5 km. Indeed, things are moving really fast as Bhutan faces a “situation” on its hands. Perhaps all this was destined.

For when the committed Communist of the Orient turns into a hardcore occidental capitalist, the former tends to be more capitalist than the latter in order to prove he has “matured”. China, having “inherited all”, now plans to be the worthy successor of the empires of past centuries to implement the agenda of aggrandisement.

Economics or trade, like in the past, is projected to be the “password” for legitimacy, as well as recognition, acceptance and submission. Or so it hopes.