Opinion   Oped  08 Feb 2020  Is the BJP paying attention to the voices from Shaheen Bagh?
Opinion, Oped

Is the BJP paying attention to the voices from Shaheen Bagh?

The rest of the disturbing and depressing domestic news involves comical clips that would have raised a chuckle had they not been so bizarre. 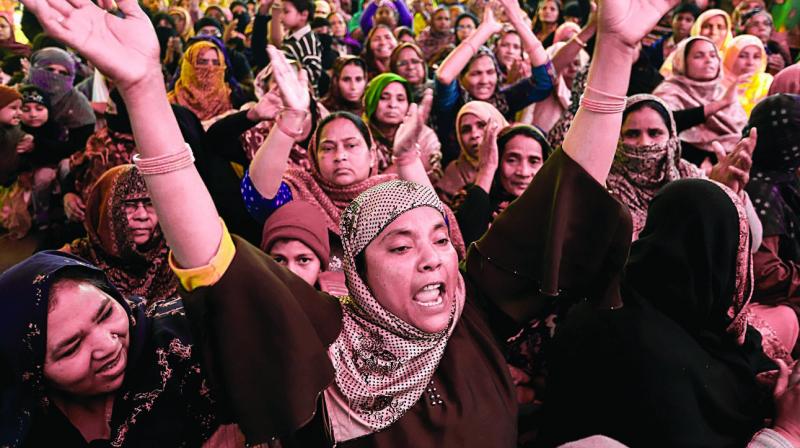 There have been attempts to convert Nazia’s son’s death into something else and not a sad consequence of him being present at Shaheen Bagh in the bone-chilling cold of the capital. (Photo: PTI)

The political contradictions and optics are countless and sickening. Looking at the front page of leading dailies… forget visitors from outer space… even we, the citizens of India, are left bewildered and upset. In fact, we are feeling like aliens in our own land. Visitors to a destination called India that we can no longer recognise. We can collectively star in a movie titled, “Aliens in Modiland”, and show the rest of the world, what’s going on… it’s sci-fi meets horror, meets Comedy Central, meets melodrama. A macabre formula for a mega box-office experience, for those who are not a part of the script. I am looking at a perfectly framed photograph of Prime Minister Narendra Modi at the DefeExpo 2020 in Lucknow. He is shown pointing a lethal weapon, eyes screwed up as he takes careful aim (target, unknown). The report says India should target exporting billions of dollars worth of military gear in the next five years. Hurrah! In a small, left hand corner of the same newspaper, we have another megalomaniac,
Donald Trump, scowling for the cameras, as Nancy Pelosi dramatically tears up his State of the Union speech. The news of his impeachment and acquittal is so blah, nobody thinks it’s worth more than a casual mention. Trump’s bombast knows no limits. His boast, the “Great American Comeback”, mocked by critics but greeted with loud cheers from his supporters, is a precursor to his expected second term win. Well, our man has no such tension back home. He is comfortably ensconced — and ain’t going anywhere! Deal with it, folks.

The rest of the disturbing and depressing domestic news involves comical clips that would have raised a chuckle had they not been so bizarre. “Tigers must be punished for eating cows, like humans,” declared NCP MLA Churchill Alemao after a tigress and her three cubs were killed inside the Mahadayi Wildlife Sanctuary. And no, he was not sacked by his bosses. His bosses happen to be educated, intelligent, seasoned netas — but they let it go. Anywhere else in the world, this man would have been questioned and made to issue an apology/clarification. Not in India. He had raised the “C-word” (cow). And he got away with that outrageous comment.

Cut to a rowdy group of mostly men, waving the tricolour and yelling, “Desh ke gaddaron ko… goli maaron saalon ko,” (“shoot the traitors/scoundrels”). The video clip clearly shows the police “protecting” this lot, when they should be arresting a few for inciting murder. Who are the “gaddars” this lumpen lot wants to gun down? Errrr… let’s look at just one. A young Muslim lady called Nazia, who has been protesting at Shaheen Bagh. So, what’s special about Nazia? There are thousands of Muslim and non-Muslim ladies at Shaheen Bagh staging a non-violent, peaceful protest. They have been there for over 50 days now, braving the bitter Delhi cold. Yes, the same harsh and unforgiving cold that took the life of Nazia’s four-month-old son, who caught a chill, while his mother huddled with the protesters and their children, determined to have her voice heard. She is mother to two other children, and this is what she had to say when asked about the death of her youngest: “I am ready to sacrifice myself and my other two children for the cause, if need be.” When asked by a reporter why she had taken an infant with her for the protest, she answered simply: “Because there is nobody at home to take care of my child. I have sacrificed one child for the sake of the nation. Yeh desh hamara hai… we will not leave our country. If we have to go anywhere it will be straight to Allah.”

I wonder: Did Narendra Modi watch that heart-rending clip? What about Amit Shah and the others? Doesn’t it tell them something? While they announced the go-ahead for the Ram Mandir, a different drama was being staged in their backyard. What sort of blinkers prevent those in power from paying attention to the protesters at Shaheen Bagh? Listen to their cries? Respond to their pleas? Nazia has called her son a “shaheed” (martyr). How many more shaheeds does India need before this government wakes up?

There have been attempts to convert Nazia’s son’s death into something else and not a sad consequence of him being present at Shaheen Bagh in the bone-chilling cold of the capital. You know what? Such manipulation comes with consequences. Perhaps, the arrogance of those in power does not allow them to confront the truth of Shaheen Bagh. “Goli maaron saalon ko…” is such a pathetic response to the far more powerful and stirring cry of “Azaadi... Hum dekhenge.” Only cowards and losers with zero imagination and even less intelligence talk in terms of shooting those who disagree with them. They are, in reality, shooting their own feet — and looking like absolute fools. Please guys, your dhamkis are so yesterday! India is on the brink of a major shift. India has always nurtured a thriving culture of protest and dissent. The Prime Minister can try scare tactics and warn the nation about an “anarchic situation”. If he indeed believes it has come to this — step up, mate. Take control. Start a dialogue with those ladies at Shaheen Bagh. Ask the people of India what’s bothering them. Then, maybe, we will find a more equitable way through the chaos and sorrow.