What makes Vizag the hazardous industry capital of India? Bribes!

There have been no less than 40 industrial mishaps in and around Visakhapatnam in the past six years, claiming at least 32 lives 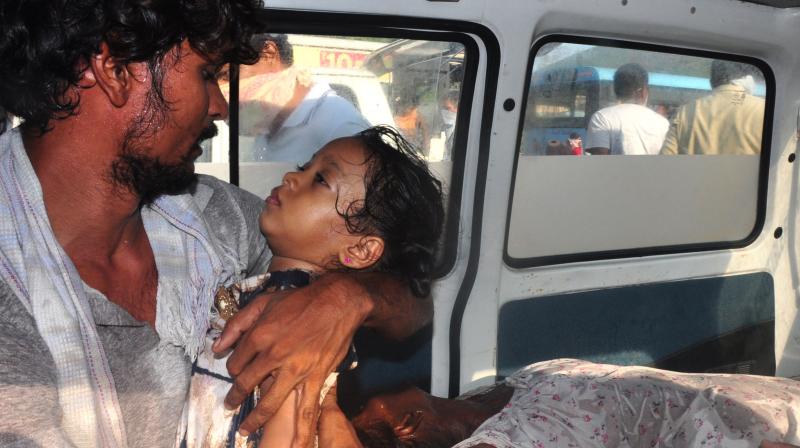 A man carries a child to an ambulance after she was exposed to styrene gas that leaked out of tanks at a factory owned by L G Polymers in Visakhapatnam, Andhra Pradesh on Thursday, May 7, 2020. Eleven people were killed in the industrial accident. (AA Photo: P Narasimha Murthy)

Horrific as Thursday morning’s styrene gas leak tragedy in Visakhapatnam was, the port city is no stranger to industrial accidents; in particular, adverse events at chemical factories. Here’s just a top-of-the-mind recall:

By one count, there have been no less than 40 industrial mishaps in and around Visakhapatnam in the past six years which claimed at least 32 lives.

But each time there is a mishap, politicians and power bureaucrats intervene to ensure that business soon goes back to usual. In the process, lakhs of rupees -- sometimes crores, depending on the magnitude of the mishap -- exchange hands.

Sources in the Andhra Pradesh government told Deccan Chronicle there have been multiple instances of politicians, bureaucrats and IPS officers rushing to the rescue of a factory or industry found to have been lax with safety precautions.

After several such mishaps in the past, there was a proposal by the then TDP regime to constitute an Industrial Safety Council comprising officials from various departments. It was decided that the council would seek periodic reports from all industries and factories.

''But that proposal was made just to calm the tempers of the public. It was never meant to take off,'' said a source, speaking on the condition of anonymity.

Citing an example, a senior police officer recalled how, after an industrial mishap a few years ago, a senior minister in the Chandrababu Naidu cabinet called his subordinate official and asked him to go slow on the case. ''He (the managing director of the industry) is close to us,'' was what the politico told the officer.

Sources said that every time there is a mishap, the factories/industries pay compensation to the family members of the victims while keeping politicians and bureaucrats, including some in the AP Pollution Control Board (APPCB) and the Inspectorate of Factories in 'good humour.'

''That is enough to bail them out,'' sources said.

The industries, besides maintaining rapport with politicians and bureaucrats, also participate actively in government programmes to strengthen their bonds with those in power.

A case in point is that of LG Polymers, where the gas leak claimed close to a dozen lives. As part of AP government's initiative 'Green Visakha, a target of planting 55,000 saplings was given to this firm by the social forestry department. On its part, LG Polymers, a  south Korean company operating since 1961, achieved 100 per cent of the target by planting 55,000 saplings in March last year.

Another official, who worked in the Inspectorate of Factories till some time ago, stated that if factories and industries do not adhere to the prescribed safety and maintenance norms, it invariably means that there has been political and bureaucratic intervention on their behalf. ''Norms remain mostly on paper. All industries are well-connected. Highly expensive gifts are given. Whenever any industry is in trouble due to a mishap, both parties take care of each other,'' says the official. He added that the axe falls only on those who cannot pay up or are not all that well-connected.

''There have been several instances wherein industries have been served closure notices or asked to stop production for not complying with norms. But most of them manage to get favourable orders from the government after a period of time,'' he says.

In fact, outspoken bureaucrat EAS Sarma has been vocal about the nexus between promoters and politicians.

Sources further said that complaints are frequently lodged by people residing close to these industries or anonymous letters are written by factory workers to various agencies, detailing the wrongdoings of the company. But no action is taken.

While Visakhapatnam has 392 factories/industries in the red zone, there are 439 in orange zone, 132 in the green zone and one in white zone, totalling 964.

When it comes to the AP Pollution Control Board, the sanctioned employee strength is 289 but the number of employees at present is merely 124.