Shootings in US: Will immigration eliminate whites?

There can be little doubt, though, that the ideological underpinnings of such ideologies precede Trump and his soulmates by several decades at least. 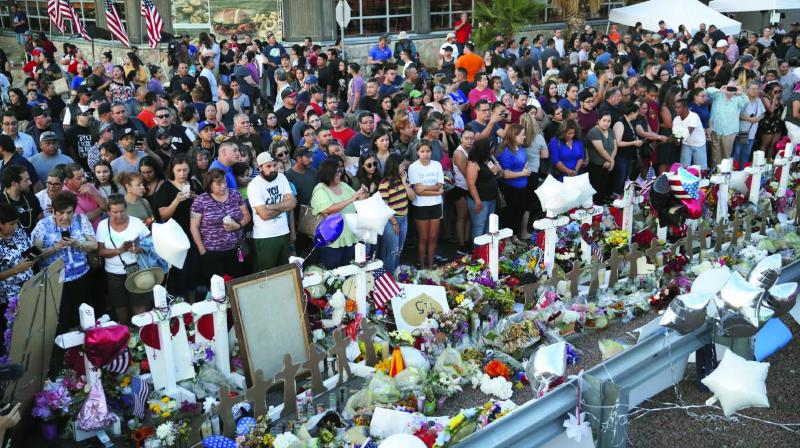 People gather around a makeshift memorial at the scene of a mass shooting at a shopping complex in El Paso, Texas, on Tuesday. (Photo: AP)

In the wake of last weekend’s mass murders in the US, much attention has been devoted to assessing the role of Trumpian rhetoric in motivating such violence. While it remains unclear exactly what thought processes led a young man in Dayton, Ohio, to shoot dead his sister and seven strangers, his counterpart in the largely Hispanic border town of El Paso, Texas, helpfully uploaded his hateful “manifesto” to the 8chan website before embarking on his shooting spree at a Walmart store that killed 22 people.

The latter’s vitriolic screed bore such close resemblance to the themes Donald Trump and his confederates have pursued that the perpetrator felt obliged to append a disclaimer, noting that his racist thought-processes predated Trump’s emergence as a presidential candidate. Trump, meanwhile, after a weekend at one of his golf clubs, addressed the nation on Monday, decrying racism, bigotry, hatred and white supremacism, while blaming the gun violence on video games and mental illness. It might have made more sense for him to look himself the mirror and plead the Fifth Amendment. It was reported this week that immigration has been characterised as an “invasion” in more than 2,000 Facebook advertisements posted this year by the Trump re-election campaign. That kind of language feeds straight into the kind of assumptions on which the “great replacement” theory, which drives white supremacism, is based. The great fear, in this context, is that browns and blacks from Latin America, Africa and Asia will in due course replace the whites in North America, Europe and outliers such as Australia and New Zealand.

Perhaps none of today’s leaders either subtly or blatantly feeding racist ideologies could fairly be described as a 21st-century Adolf Hitler; quite a few reflect the least amusing traits of Benito Mussolini. It would be wise, though, not to get too carried away by parallels with the 1930s. The looming 2020s may not represent an unprecedented period in history, but each age has its distinctive characteristics. Today’s proto-fascism thrives on racially and ideologically divisive rhetoric that perhaps percolates through to the suitably motivated as a renewed call to arms. There can be little doubt, though, that the ideological underpinnings of such ideologies precede Trump and his soulmates by several decades at least.

One factor that sets the US apart from most other nations is its citizens’ constitutionally sanctified right to bear arms, which in many states translates into fairly easy access to military-grade weapons for anyone who chooses to acquire them. By some accounts, there are more weapons than people in the nation. That helps to explain why mass shootings are not the norm in other countries where video games are as popular, and mental illness as widespread, as in the US. Already this year, the latter has experienced over 250 such events.

Trump has lately, as in the past, tweeted his support at least for background checks on those who seek to purchase weapons, but congressional efforts by the Democrats on this front have faltered in the face of Republican obduracy, which invariably can be linked to generous political donations by the National Rifle Association, a lobby group that deserves to be designated a terrorist organisation. The El Paso massacre at least is being investigated as a potential act of domestic terrorism, although it’s pertinent to point out that violent white supremacism is as much an international phenomenon as Islamist militancy. The Texas killer acknowledged the influence of the man who murdered Muslim worshippers in Christchurch, who in turn was inspired by a Norwegian far-right maniac.

Back in 1963, Malcolm X was roundly condemned for describing the JFK assassination as a case of chickens coming home to roost. But the rotten eggs in the basket keep being replenished even as the White House rooster keeps trumpeting his innocence.