Those have been elevated by BJP president Amit Shah into an economic force of their own. 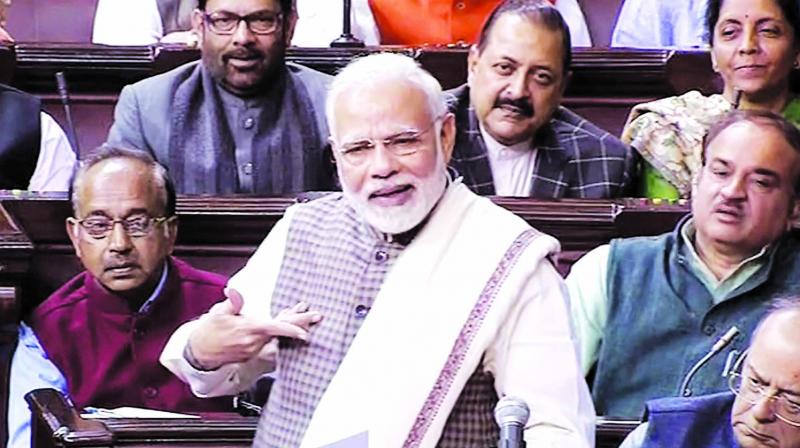 Filmmaker/Showman Subhash Ghai made a blockbuster titled “Ram Lakhan” way back in 1989. About the time Young India was still in nappies. The Millennials had yet to figure out what to do with those pacifiers, and were still being potty trained. In that fairytale zamana, along came a very hirsute actor named Anil Kapoor, who greeted the nation with a lusty “Ae Ji, O ji…” and followed that up with a song that is still on everybody’s lips, “My name is Lakhan.” Kapoor played the affable rogue who lived by his wits and indulged in the usual badmaashi and chhed chad, that symbolised youthful exuberance at its peak. When he lip-synced to nonsense lyrics like “One two ka Four, Four Two ka One”, nobody bothered to deconstruct those lines and look for deeper meaning and purpose. So many decades later, even on foreign shores, Anil Kapoor just has to show up for NRIs to chorus . “Ae ji, O ji”, and demand a command performance of his trademark dance step. Our movies are just so amazing! I never cease to marvel at the power of Bollywood songs to instantly connect fans from across the world. We shall of course, forgive the blond cheerleaders at the NBA game between Charlotte Hornets and Miami Heat on January 28, as they dared to dance to the “Ghoomar” number from Padmaavatt. I am surprised Allauddin Khilji’s ghost didn’t strike the enthusiastic lasses down there and then.

What has any of this got to do  with the Budget? Look at it this way : Imagine Namo singing, “Ae ji, O ji’, and playing the flamboyant Lakhan, leaving Arun Jaitley to do the skewered math ( One Two ka Four).  The average Joe has been left bewildered and clueless, entirely unable to decode the complicated structure of that mumbo jumbo and imagining an expert will come along and make it all  easy to comprehend. The thing is, we got screwed. Again.  Only nobody is admitting it. In the movie, Jackie  Shroff played Ram Lakhan’s cop-brother, upright and courageous, brought up by a long suffering mother to do the right thing and avenge the death of their father. Ghai gave the audience yet another version of the old “good vs. evil battle”,  and at some point, the two brothers with common enemies ( evil uncles ) find themselves at the standard moral crossroads. Lakhan is with the bad guys by now, taking every imaginable shortcut to wealth and power, while Ram soldiers on, determined to vanquish the tyrannical uncles in a lawful, just and honorable manner. You can guess the ending. Every Hindi potboiler of that era  had an identical resolution to the trickiest conundrum : the good guy had to win. Alas, it works differently in real life. We are the good guys. There is no win in sight.

That still leaves the “One Two ka Four” question hanging in the air. How on earth does one-two become four or four- two become one? Only the finance minister knows. Meanwhile, the poor aam aadmi is still trying to get a fix on Aadhaar. He cannot crack GST (nobody can). Demonetisation has almost killed his dhanda. There is less money in the family kitty than ever before. Downsizing is going on pretty aggressively at the workplace. He may or may not have his job tomorrow. But the netas are busy assuring him it’s all for his good. Yes, the Rafale Jets do cost some absurd amount (Rs 6,800 crores a plane! would you believe it?). But doesn’t  that dumb cluck looking at his shrinking pay cheque want to feel safe knowing our pilots are guarding the skies and flying the latest, swankiest aircraft? As a citizen his heart should be bursting with pride at our secret defence deals. No. He has no business to probe and ask nosy questions about what seems like a completely crazy deal. Defence minister Nirmala Sethuraman does not like inquisitive people. In fact, this administration hates answering questions on any issue. The only thing they want to make transparent is a citizen’s life. Zero tolerance be damned. There is zero privacy. By the time the elections roll up, all questions may be banned.

And questioners banished. Till that comes into play, we are expected to shut up and put up, with garbled, convoluted rationalisations of how this cruel Budget is actually good for us.

The trick about reduced diesel prices has been seen through even by schoolkids who are openly laughing at the deception. If finance minister Arun Jaitley is attempting a Jackie Shroff, he will have to try much harder! But we are happy with the antics of prime Minister Narendra Modi, who is entertaining us as usual with his POT theories. Potato-Onion-Tomato is his new mantra, but try going to your vegetable vendor and quoting the PM. He will chase you away and chuck a rotten tomato at your receding head. Ditto for pakodas. Those have been elevated by BJP president Amit Shah into an economic force of their own. No shame in being a pakoda seller, he tells the hungry jobless youth, gaping open mouthed at this new wisdom. There’s dignity in dem pakodas, sir. Please don’t devalue India’s favourite snack.

But selling pakodas doesn’t technically qualify as a “job”. Who is to tell our mighty netas?

I watched “Ram Lakhan” again, just to get over my Budget blues. As Anil Kapoor danced vigorously to “My name is Lakhan… he certainly brought a smile to my face. I went back to my regular neighbourhood vegetable vendor and opened up a new line of credit, while singing “One Two ka Four” lustily. He was neither impressed nor amused. He snarled, “Natak bandh karo. Paisa pheko”. I left without my weekly supply of POT. But saw some growing in my tiny kitchen garden (swear it wasn’t planted by me!). Moral of the story: When all else fails, put that in a pipe and smoke it. One Two ka Four, folks!