Is the world all set to experience a ‘Coronaissance’?

The Great Bubonic Plague primed Europe for the Renaissance 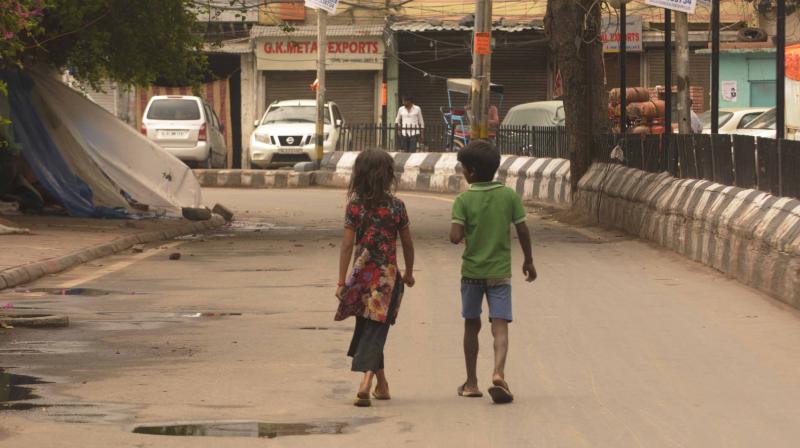 A boy and a girl roam in a deserted street during the current coronavirus lockdown in New Delhi. (DC Photo: Pritam Bandyopadhyay)

“I love to go [to the market] and see all the things I am happy without.”
-- Socrates

It was due. Humanity and the Earth were crying for it. A rebirth… but it could happen only after a black death.

Between multinational companies and the World Trade Organisation, everything linked to mankind went into a spin — self-generated and manufactured. Increased wealth did not make for happier human beings. Imbalances became the order of the day. Between human beings and with the Planet.

Anything that was economically powerless or voiceless, was devoured with greed and heartlessness. Peaking with the screaming realities staring us in the face today. The Sustainable Development Goals achieved little, the Millennium Development Goals are limping.

Vast tracts of land disappeared, fossil fuels became precious, seas began to rise. Climate Change became the new “scare”. Even that was not good enough to bring humanity to its senses — voluntarily.

The scenario became as glib as it could get. ‘Instant’ and ‘Now’ were the mantras. Wealth and access made it possible.

A party tonight meant a visit to the parlour in a loud car, a swish of a new outfit. Returning home, decking up for perfect display. Again out in the loud car to a destination. A lot of unbelievable consumptive stuff. In between and later. It was enough to just think of London, Bangkok or New York. Within days, instant gratification. Arrival across continents within hours.

A virus became the great equaliser. Brought it all to a halt. Now, mankind is struggling with questions that have not occurred to most at the turn of the century. The rising questions in themselves are a puzzle for most.

Extraordinary phrases are emerging on the horizon. People on the planet must learn to wait, be kind and patient. This is the time when we must do the best that we can. Let’s hope for the best. Germany, it seems, is not immune to the ravages of the epidemic. What could you gift a wife for her birthday in such a lockdown? ALL clubs are CLOSED. People are CANCELLING dinners.

Suddenly, the “I” is turning into a “We”. A collective spirit is silently escalating in the desperation to survive the onslaught of an unseeable virus. Arrogance is taking a toss. Rich economies facing a Covid-19 explosion are welcoming help from the less wealthy.

People are “deprived” of dashing in hectic frenzy for meaningless this or that. Mindless, random “ordering in” has become a limited option. Grand, expensive displays are turning into simple gestures of affection and love.

Where is this taking us?

Social media posts in Lockdown time are revelatory. A large number are about cooking in the confines of the home. About “having” to cook — with limitations. There was a time when gathering around the family hearth was the norm. I recall an old Indian tradition, if that is what it should be called. If we went out for a dinner, on return, my mother-in-law would insist on having a hot cup of milk or something equivalent. The concept was: “choolaa jalnaa chhahiye” (the cooking fire must be lit).

As cafes, restaurants, takeaways, instant food became the given normal, the concept of food being cooked at home became rare. As recession hits the world, it may not be so easy to mindlessly squander on food – outside or at home. Shopping for exotic, unseasonal ingredients may have to make place for simpler cooking.

A dear elder once gave me a lifelong lesson when I was in my teens. Shopping for a variety of ingredients and then making dishes does not make you a great cook. A great cook is one who checks what is at home and devises beautiful dishes from them. That may yet be the greatest Corona cooking lesson through Lockdown.

Will we sustain that learning? Are we going to learn from history?

Before the European Renaissance, religious and philosophical beliefs spread and inter-mingled across the trade routes. There were conflicts and the Crusades were like a culminating symbol of that era. Across the board, scholars began delving into ancient Greek and Roman texts in search of a new value system. There were innovations in publishing and the arts. The printing press arrived with long-term impact. Increased literacy meant people could read and interpret texts for themselves, not via a priest.

More than anything else, though, it was the Black Death that impacted the rise of the Renaissance. Words like “Great Mortality” eerily evoke the Covid-19 era. The “Great Pestilence” spread relentlessly across large tracts of Europe and Asia.

Historians differ on whether 75 or 200 million died of the Great Bubonic Plague in Europe alone. It is nearly agreed that more than half of Europeans died. People were stupefied that they did not know how to stop the spread. People moved away in different directions. The balance of power and wealth in Europe completely changed.

This is what primed society for the Renaissance. Renaissance was about new ideas of humanism and throwing off the shackles of fiendish religious beliefs and feudal traditions. About innovation and new forms of artistic expression.

Are we on the brink of a “coronaissance”? Maybe. Human beings are unpredictable. They just may rush back into their busy-ness and consumptive patterns after lockdowns and restrictions fade away.

Just suppose if that is not so. Are we primed for a “coronaissance”? Let’s look at the pointers that hark back to history.

There has been an exceptional global exchange of diverse socioeconomic-cultural-anthropological and scientific theories. A wide spectrum of stakeholders have developed one or other form of interconnectedness — both physically, and more importantly now, virtually. Religious thinking has taken various forms, including the fundamentalist, with an equal number of diverse responses to it.

The Internet is an explosion of information like never before. The world is digging into ancient concepts, recipes, spiritual beliefs, etc — with direct access. Creating ripples and groups around each new finding. Then reacting to it in innovative ways with new practices. The Smartphone is ever increasingly making this flow of information available to anyone, anywhere, even across the Digital Divide.

Then comes Covid-19 and the world is dumbstruck. From royalty to ministers to the poor, no one knows where the virus will strike next. Figures of death are what people are looking at, day in and day out. The fear psychosis has reached mob hysteric levels.

A book written in the mid-1970s has re-emerged for relevance time and again. Now maybe the time to give it its due: Small Is Beautiful by E.F. Schumacher. Almost ten years ago, Madeline Bunting revisited the book and the concepts in an article in The Guardian of UK. In the Covid-19 scenario, between the book and the article, there are strong takeaways.

The large scales of big markets and big political entities led to a dehumanisation of people and the economic system. Profit was the only guiding factor, disregarding human need. Down the line, people tried to revive the human / small aspect. Again, voracious expansion of consumer capitalism distorted these initiatives.

Leave it to the millennials

The millennials have a huge role to play for a “coronaissance” to happen. If they do, it will surely be beautiful.

A recent interview on Indian television was revealing. It was an Italy-returned Indian Covid-19-recovered patient. He was asked how this experience has changed him. He said two things:

a) While I was recovering, friends and relatives were sending me lot of mantras and prayers. I think I have become more spiritual and religious now.

b) Before this, life was all about having a blast — which mall, which restaurant, which movie today. I think now, I will be spending more time with my kids and family at home.

As Schumacher indicated in his book: Human happiness would not be achieved through material wealth. Going back to the human scale is imperative — to focus on human needs and human relationships. From that will spring the ethical response of stewardship to the environment.

Maybe time to take a leaf from Confucius: “We are so busy doing the urgent, we do not have time to do the important.”

Neelima Mathur is an India-based executive producer-researcher-writer, mentor and trainer for documentary and NGO films. She is also festival director, Lakeside Doc Festival.