360 degree: Going green in the time of Trump

Many countries and the private sector have seen climate action as an opportunity to catalyse economic yet sustainable practices. 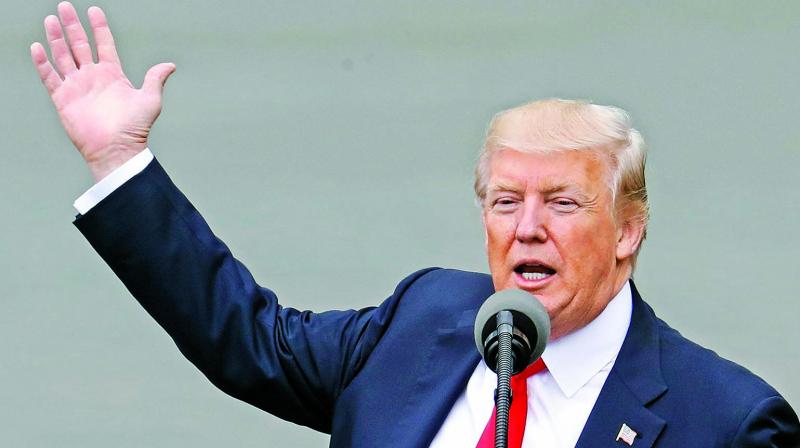 The US has repeatedly slammed growing economies like India and China for their carbon emissions and environmental policies, but renewable energy is an idea whose time has come.

The United States of America President Donald Trump’s indication to withdrawal from the historical Paris Agreement has come as a major blow to the efforts of world leaders, negotiators and think tanks amongst others who have worked painstakingly to hammer out a new global pact to reduce emissions and deal with the impacts of climate change. While Trump may have succeeded in keeping the empty promises of his domestic election campaign, he has broken the hard-gained trust between various parties and other world leaders. He has regressed to the US position from a decade ago to hide behind growing economies like India and China. His limited understanding of the agreement is strikingly evident from the fact that he thinks the Paris Agreement is not a ‘fair’ deal. This, when each nation - including the US - had given their own country-driven idea of fairness while submitting their Intended Nationally Determined Contributions. Also, the US was central in propagating this idea in negotiations in Warsaw in 2013 and thereafter! Yes, developing countries have been demanding support in terms of finance, technology and capacity building so that they are able to transition to a sustainable growth trajectory at a faster rate; they are able to cope with the disproportionate adverse impacts of climate change on their citizens. Because developing countries think, it is only 'fair' to seek support from the large developed economies that have been the largest historical emitters; who have technologies, finance and capacity already.

Paris Agreement: A landmark achievement
The Paris Agreement was a landmark achievement that saw the conclusion of decades of vigorous and, at times, tumultuous negotiations. Landmark, for it leads towards a trajectory (though sub-optimal) that would enable limiting to a 2 degrees pathway through an optimal consensus based approach inclusive of almost all countries. Optimal consensus was guided by a country-driven idea of fairness and national appropriateness.

The agreement heralded a new hope for the generations to come - a belief that world leaders are committed to limit rising sea levels, intense droughts, acute food shortages, destructive storms and floods and other catastrophic effects. One had only thought of moving forward with increasing ambition, as aggressively as possible, to deal with climate change, and to protect the rights of future generations.

Detrimental blow to the accord?
It is also to be noted that the formal exit from the Paris Agreement will require at least four years in a true sense as parties can only submit their formal intent to withdraw after three years of the Paris Agreement coming into force, which happened in November last year. It will take another one year for this to be executed. Hence, a formal exit may not be possible until 2020. It would be the same period when all parties start implementation of their Nationally Determined Contributions or pledges to take action on climate change. Perhaps towards the end of Trump's first term! However, a prerequisite condition for the Agreement enters into force was that it has support from at least 55 parties to the convention, accounting in total for at least an estimated 55 per cent of the total global greenhouse gas (GHG) emissions.  The Paris Agreement had the support of 147 parties (including US) and covered around 66 per cent of total GHG emissions of which the US' share was around 18 per cent. The US has been the largest historical emitter in terms of absolute GHG emissions.

While it is almost impossible to renegotiate a new ‘fair’ agreement on account of indication from a single party, the US' intention could trigger a domino effect with other countries following suit - the consequences of which can be catastrophic!  So far, most of the countries have come out in the open to reaffirm their support to the cause of climate change, as ignoring it and its adverse effects is not a luxury that one can afford; and to unanimously condemn the announcement made by Trump.  This gives us hope that rest of the world leaders will not allow the derailment of global efforts. And it will only be a race to top henceforth and not a tumbledown!

Developing countries’ burden increases
The inaction of the US, as proven by the recent domestic push for coal, will not only affect its domestic environment but also have a global impact.  It will drastically reduce the carbon budget for other countries. This means that for countries like India, which has per capita emission of around 2 tonnes of CO2e as compared to that of around 25 tonnes of CO2e of the US, there would be lesser carbon space to undertake economic activities. Whereas it is required that India undertakes aggressive economic growth in order to reduce its development deficit and alleviate poverty. This would have implied a ‘fair’ share for India, which might be reduced with the US exit. And so, will be for other countries. This would mean that the global trajectory towards limiting to a 2 degrees pathway might slow down, unless other countries raise their ambition level.  Many of these countries suffer from drastic adverse impacts already and will have to take the burden of compensating for the US's inaction. 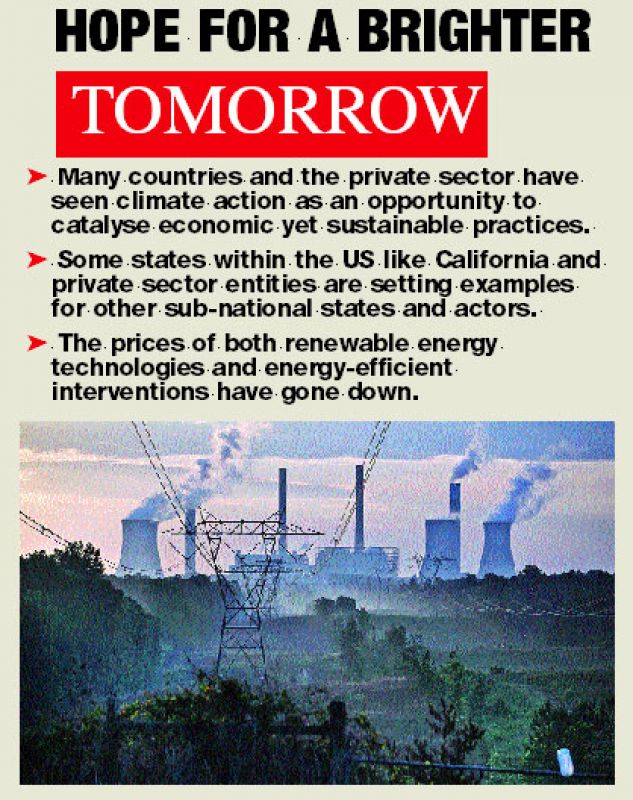 Where there’s will, there’s action
Many countries, sub-national actors and the private sector have seen climate action as a unique opportunity to catalyse economic yet sustainable practices. For instance, with or without formal participation in the global regime, some states within the US like California and private sector entities are setting examples for other sub-national states and actors. This trend is most likely to continue. There is an unprecedented growth in share of renewable energy (RE) in the country's energy mix across the world along with a move towards more energy-efficient (EE) technologies.  It is now also recognised that RE and EE makes complete business sense as climate actions. The European Union and China, among others, see this as a huge economic and trade opportunity for their technologies as countries like India have huge demand for both RE and storage technologies.  The prices of both renewable energy technologies and energy-efficient interventions have gone down, leading to transformational behavioural changes and choices. Thus, momentum is seen across nations, businesses, investors and citizens. This momentum needs to be sustained. And the rest of the world leaders must shoulder the responsibility of continuing to provide strong signals supporting their continued participation in the Paris Agreement.