360 degree: India must stay on its clean energy path 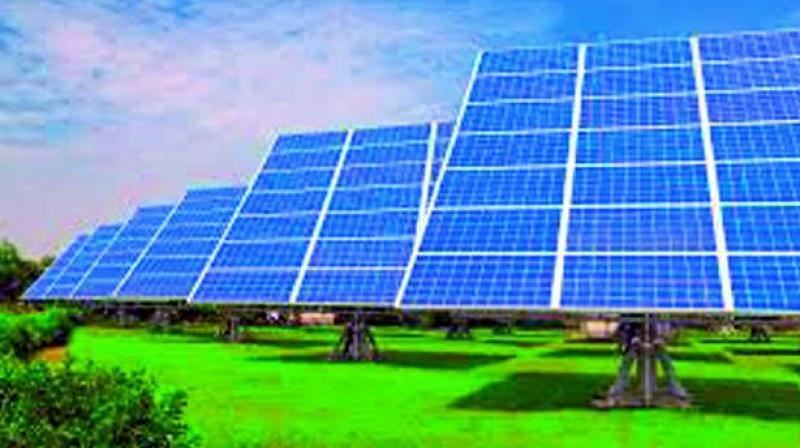 On June 3 2017, the Prime Minister during his recent visit to Paris described protection of environment as an article of faith for Indians, and a centuries-old tradition. He has reiterated India’s commitment to the Paris Agreement even after the US pull-out, which is a good sign for India.

India ratified the Paris Agreement to the United Nations Framework Convention on Climate Change (UNFCCC) on October 2 2016 and has submitted its Nationally Determined Contributions (NDCs) to the UNFCCC for the period 2021–2030. Specifically, India has indicated its intention to: 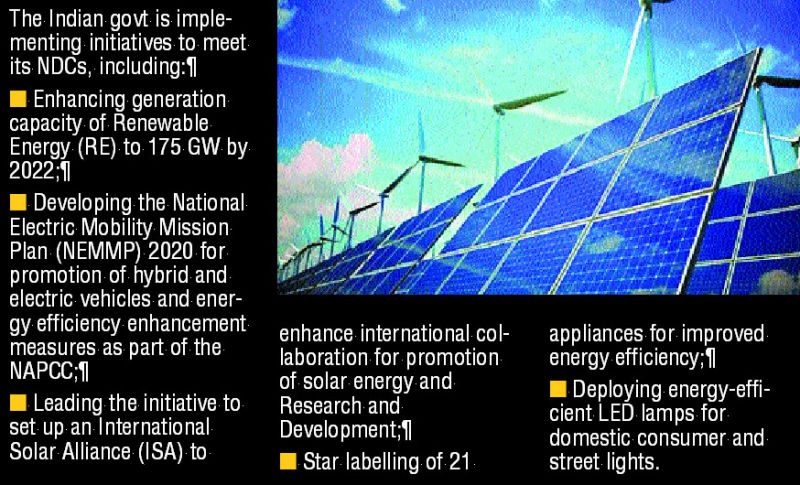 Currently, the GOI aims to achieve the pre-2020 voluntary pledge of reducing the emissions intensity of our GDP by 20-25 per cent over 2005 levels by 2020.  As per the India’s first Biennial Update Report 2015, the emissions intensity of Indian GDP has reduced by 12 per cent between 2005 and 2010, though its per capita emission of 1.9 t (CO2 equivalent) of Greenhouse Gases in 2015 was only one-fourth of that of China (7.7 t of CO2 equivalent) in 2015. The United Nations Environment Programme (UNEP) Emission Gap Report 2015 has recognised India as one of the countries on track to achieve the voluntary pre-2020 pledge.

The GCF was set up under the UNFCCC as an operating entity of the financial mechanism of the Convention. India is eligible to access the GCF if needed, but no specific assistance has been received by India till 2016 for implementing the NDCs.

However, India has already made time-bound action plans and is making good-faith efforts to achieve its NDCs irrespective of any assistance from the US (or other countries). The most important of these efforts which is to increase the proportion of non-fossil fuel based electricity, is well underway, thanks to the steep fall in the Solar Photovoltaic Module (PV) module prices over the last three years.  As a result, India’s power sector (which contributes about 50 per cent of total CO2 emissions in India) is well-positioned to reduce specific emissions of CO2 by 28.7 per cent well before 2030.  This is planned to be achieved not only by increasing the installed capacity of non-fossil fuel-based energy from the FY 17 level of 31.7 per cent to the projected level of 56 per cent by 2027, but also by increasing the efficiency of coal-fired power plants by inter alia implementing its ongoing drive to enhance the utilisation of super-critical technology.  If these action plans fructify (along with initiatives to curb emissions in the transport sector), by 2030, India has the potential to reduce its emissions intensity by about 50 per cent below 2005 levels, thereby exceeding its NDC target.

The UNFCCC clearly lays down that the principles of Equity and Common But Differentiated Responsibilities and Respective Capabilities (CBDR-RC) should guide climate actions. Therefore, India has argued that developed countries (including the US) should take the lead in mitigation actions and provision of means of implementation in terms of finance, technology development and transfer, and capacity building support to developing countries. These principles have also been embedded in the Paris Agreement, wherein the developed countries have committed to mobilise US $100 billion per year with the intention to enhance it beyond US $100 billion per year by 2025.

The transformation of India’s power sector (the largest single source of CO2 emissions in India) requires an investment of at least Rs 6 trillion simply to enhance the generation capacity of Renewable Energy Sources (RES) from the March 2017 level of 57 GW to 175 GW by 2022.  This is in addition to the investment required to connect the incremental RES to the National Grid, which can continue to be supported by India’s National Clean Energy Fund (NCEF), which is funded through a carbon tax of Rs 400 per ton of coal used.  This huge sum of Rs 6 trillion required over the next five years will certainly require access to low-cost international funding, which India is trying to tie up from Germany, Japan, and other like-minded countries who wish to support India’s journey towards a “greener” economy

Since most large American companies with long-term business interest in India are supporting the growth of green energy even after President Trump decided to abandon US commitments to the Paris Agreement, the US withdrawal from the agreement will have only a negligible impact on the bilateral mechanisms on clean energy.  In any case, the US government must follow the procedures laid down in the Paris Agreement even to withdraw from the same and this process itself may take a few years, by when India may already be well-positioned on a transition path to a greener economy.

Dr R. Srikanth is the professor and head of Energy and Environment Policy Programme in the National Institute of Advanced Studies on the Indian Institute of Science Campus in Bengaluru.