Opinion   Oped  11 Dec 2016  In UP, Behenji’s elephant fights for a comeback
Opinion, Oped

In UP, Behenji’s elephant fights for a comeback

If Mamata is the ‘didi’ of Bengal, Mayawati is affectionately called ‘behenji’. 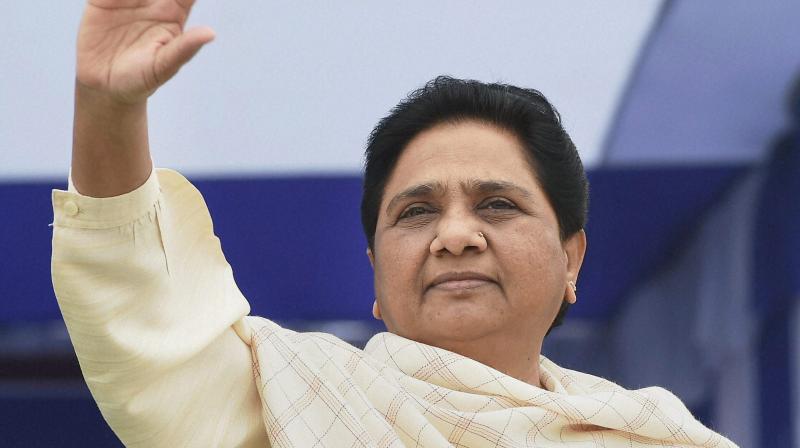 BSP supremo Mayawati waves at crowd at a rally at Ambedkar Park in Lucknow on Tuesday on the occasion of death anniversary of Dr Bhim Rao Ambedkar. (Photo: PTI)

In 2008, the “dalit queen” Mayawati made her debut in the club of 100 most powerful women in the world. In Forbes’ power women list she ranked 59th. The list was topped by German chancellor Angela Merkel.

Mayawati was born in a dalit family and her father was a post office employee at Gautam Budh Nagar (Noida). After her BEd, Mayawati was working as a teacher and preparing for IAS examinations when she was spotted by dalit politician Kanshi Ram. Her biographer, Ajoy Bose wrote that Kanshi Ram told her: “I can make you such a big leader one day that not one but a whole row of IAS officers will line up for your orders.” In 1984, when Kanshi Ram founded Bahujan Samaj Party, Mayawati was one of the key members of his team. She was first elected to Parliament in 1989. Mayawati’s rise to power was described by the former Prime Minister P.V. Narasimha Rao  as a “miracle of democracy.”

Her slogan “Tilak (Brahmins), taraju (Baniyas) aur talwar (Rajputs) inko maaro jute chaar,” had once demolished the upper caste dominance in UP politics and shot her to the top.

Unlike Jayalalithaa and Mamata Banerjee, Mayawati had started with a major handicap. She was a dalit. Since independence, despite repeated attempts there had been no significant political movements among the dalits. B.R. Ambedkar’s Republican Party had failed to emerge as the voice of the dalits and downtrodden. It could not break the stranglehold of Congress, which had cut across caste and communities. It was finally Kanshi Ram’s BSP, which finally emerged as a bigger force and demolished Congress in Uttar Pradesh. As Kanshi Ram struggled to consolidate his party, Mayawati acted as his closest aide and confidante. In no time she had become second-in-command.

If  Mamata is the didi of Bengal, Mayawati is affectionately called behenji.  At this juncture whilef Mamata is eyeing Delhi, behenji is struggling to stay afloat. In the 2014 Lok Sabha polls, both AIADMK and Trinamul Congress had successfully resisted the Modi wave. Mayawati drew a blank in Uttar Pradesh. If one turns the pages of  political history, in the 2004 general elections, the AIADMK led by J. Jayalalithaa had failed to win a single seat and Trinamul Congress won only one.  With Uttar Pradesh elections round the corner, behenji’s  elephant  is fighting for a comeback.

Mayawati, Jayalalithaa and even Mamata have been accused of corruption charges. Probes are on. Yet like Jayalalithaa and Mamata, corruption charges never waned Mayawati’s appeal to her vote bank. In an article titled Power women of North and South, Ramachandra Guha wrote: “It is striking how successful Mayawati and Jayalalithaa have been in transferring the loyalties of the party faithful to themselves. In each case, they were helped by the prolonged illness (and eventual demise) of the man they followed and, in time, succeeded. But it is a mark of their strength of their own characters that they have so completely transcended the mark of their political apprenticeship.”

Mayawati and Jayalalithaa are harsh, unforgiving and ruthless autocrats. Guha explains, “Both Jayalalithaa and Mayawati have laboured under a double handicap. Not only was Jayalalithaa a woman, she was also a Brahmin, this in a state where political hegemony was enjoyed by non-Brahmins. Not only was Mayawati a woman, she was also a dalit, this in a state where economic, political and cultural power has been the preserve of Brahmins and Rajputs. To fight their corner, to win elections, both ladies have had to cultivate a certain ruthlessness.”