Opinion   Oped  12 Mar 2020  All nations scramble for solutions as ‘Made in China’ coronavirus spreads
Opinion, Oped

All nations scramble for solutions as ‘Made in China’ coronavirus spreads

The saddest part is that mankind is unlikely to have learnt any lessons, as in the past 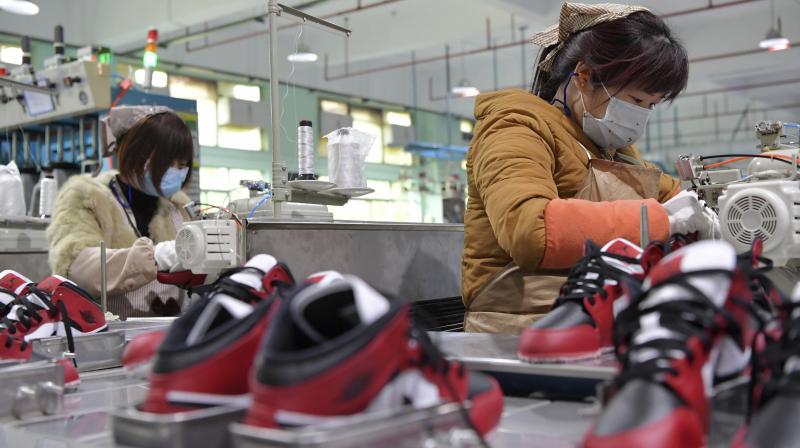 Workers wear masks as they manufacture shoes at a factory in the town of Xiangtang, Nanchang county in eastern China's Jiangxi Province. The ruling Communist Party has told local officials to help reopen factories that were idled by the most intensive anti-disease controls ever imposed. (AP)

One fine morning, Joseph Stalin, then the all-powerful general secretary of the Communist Party of the Soviet Union, could not find his watch and he promptly alerted Lavrentiy Beria, the much-feared head of the KGB. But he found it soon afterwards, and told Beria so. “Too late, Comrade Stalin”, the KGB boss intoned, “five people have already confessed and have been executed”. While this incident may have been a mere figment of the popular imagination – and Russians have an exceptional ability of making light of hardship or adversity -- the fact remains that totalitarian regimes are adept at the extraction and suppression of information, especially of the adverse kind.

This tendency appears to have been at play at Wuhan and caused the novel coronavirus (COVID-19) epidemic. It has ravaged the city, consumed over 3,000 lives in China alone and set alarm bells ringing across the globe.

In all fairness, the coverup instinct is not confined to authoritarian regimes.
The Fukushima nuclear incident in Japan, for example, took place in March 2011. The power plant was operated by Tokyo Electric Power Co (Tepco). It resulted in three nuclear meltdowns and leakage of radioactive materials that contaminated vast stretches of land and marine life. The president of Tepco admitted in June 2016 that the company covered up the meltdown.

Coronavirus was first reported in Wuhan (in China’s Hubei province) in late 2019. When the first case appeared in early December, Wuhan officials threatened and gagged the doctors from alerting the public. Coronaviruses are common in animals and can sometimes spread to humans. By the time the authorities issued warnings and alerted WHO on December 31, the virus had already spread to an unmanageable level. By January 30, every Chinese province had been afflicted.

This is not the first time that the world has been “gifted” a deadly virus of Chinese origin. An epidemic of SARS, or Severe Acute Respiratory Syndrome (SARS-CoV), affected 26 countries and resulted in more than 8,000 cases in 2003. It was again an animal virus, that was transmitted to humans first in the Chinese province of Guangdong.

We now know that coronavirus continued to spread unchecked within and outside China, for one month, as China enforced silence and struggled to get a handle on the problem. Here it becomes important to contextualise. Over 5.5 billion Chinese travel annually within the country. More than 160 million Chinese travel abroad, and over 140 million overseas visitors come to China. It is scary to realise that in December 2019, tens of thousands of unsuspecting carriers continued to travel all over, compromising their own health and safety as also that of others.

The reaction of nations and individuals, in coping with virus, is also a study in contrast. Billionaire philanthropist Bill Gates states that the coronavirus has started to behave like a “once-in-a-century” pathogen. As usual, the Bill and Melinda Gates Foundation quickly rose to the occasion, pledging $100 million to fight the outbreak.

Several countries, including India, reached out to China with offers of help and support. Prime Minister Narendra Modi wrote to President Xi Jinping offering assistance. The spokesman of India’s external affairs ministry noted that India had always been the first responder for its neighbours and friends in times of crises. It was in that spirit that “we are ready to dispatch the relief package as our token of support to China….” On February 25, an Indian Air Force C-17 transport aircraft delivered 15 tonnes of medical supplies to China, comprising mostly of masks, gloves and other emergency medical equipment. The aircraft also ferried back 76 Indian nationals from Wuhan, in addition to 23 nationals from Bangladesh, six from China and other nations. The aircraft had to wait for a week for Chinese clearance. India had evacuated 647 of its nationals and seven Maldivians earlier in February. New Delhi was also diligent in temporarily suspending visas for all those resident in China, as well as flights to and from that country. These precautions have helped so far, though there is no room for complacency.

On the other hand, fearful of upsetting its benefactor and ally, Pakistan decided against evacuating close to 1,000 of its students in and around Wuhan, disregarding their entreaties and that of their parents. China has lauded its “iron ally” Pakistan’s decision.

Surprisingly, even South Korea, which is keen on President Xi Jinping’s visit in April, chose the appeasement route in allowing flights to and from China to continue. The South Korean embassy in Beijing put up a banner proclaiming – “Chinese difficulties are ours”. Beijing is naturally pleased, but Seoul has ended up paying a huge price. South Korea has reported a total of  7,134   cases of coronavirus,  367   on March 7 alone, causing 50 fatalities.

Confronted with such an epidemic, the Chinese President was forced to admit that the outbreak revealed “obvious shortcomings”. He appeared as anxious to prevent an economic slowdown, exhorting workers to return and the factories to resume production. However, the people’s confidence in the ruling Communist Party and the administrative machinery is really shaken.

“The window of opportunity (to contain the outbreak) may be closing,” WHO’s director-general Tedros Adhanom Ghebreyesus said in Geneva recently. On the ground, there are mixed indications. It is possible that new cases may be declining, at least in China. Mercifully, the prevalent virus is mild in form. All the same, the situation remains fluid. The saddest part is that mankind is unlikely to have learnt any lessons, as in the past.